It's the Swiss again 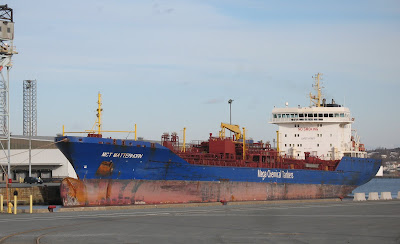 Another ship registered in Switzerland has arrived in Halifax. Last month's Swiss caller (Andermatt, December 21)was rather a rare occurrence, but to have another so soon is certainly unusual. The ship appears to be in ballast, and tied up at pier 27, presumably for some minor repair work.

Mega Chemicals Transport of Switzerland operates a fleet of eight product/chemical carriers, all of approximately the same size.
Today's arrival MCT Matterhorn is typical of the type. Built in 2006 it measures 12,776 gross tons/ 20,677 deadweight. According to the owner's website, the ship is fitted with 16 cargo tanks, all stainless steel. http://mega-chemicals.ch/english
Notable features include the full width bridge, usually found only in ships that trade in northern waters, and the landing derricks forward. These are used exclusively on the St.Lawrence Seaway to land line handlers on the docks.
.
Posted by Mac at 2:31 PM