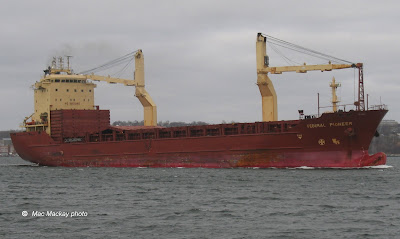 1. Federal Pioneer (number four) gets away from anchorage and heads to sea. One hatch is sprung open, indicated hold cleaning in preparation for a grain cargo. 2010-03-14. 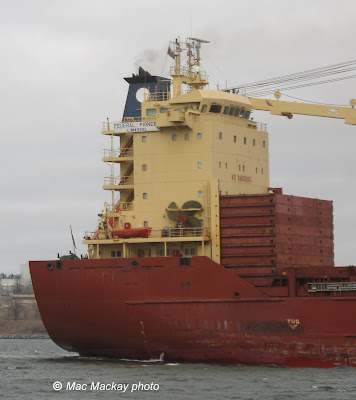 2. The ship has removable tween decks, which are nested forward of the house when not in use. A spare prop is positioned so that one of the cargo cranes can fetch it if needed.

Those of us who go back a ways, will know that the Federal Pioneer that arrived for bunkers today is not the first ship to bear the name.
This one was built in 1999 by Jiingjiang Shipyard in China and is a modern general cargo ship, also fitted for bulk cargoes. It has three holds with removable tween decks (nested on deck in photo number 2.) It can carry grain, containers (984 TEU) and break bulk cargo, using its two 40 tonne cranes to do the work. It is also rigged to transit the St.Lawrence Seaway, which it does frequently. In view of the Seaway opening next week, it is likely headed that way.
It is the fourth ship to carry the name for what is now Fednav, although this one is on charter from Cypriot flag owners, Athena Marine Co Ltd.
The first Federal Pioneer , 2964 gross tons, was built in 1945 at George T. Davie & Sons in Lauzon, Quebec as Bell Park, one of the smaller class of 'Park' ships built for the Canadian government as wartime emergency ships. The newly formed Federal Commerce & Navigation Co Ltd bought the ship in 1945, then sold it in 1950. It ran for Brazilian owners until 1974 as Santa Helena, when it was sold for scrap.
The second Federal Pioneer was a fixture in Halifax for many years. Built in 1944 by United Shipyards in Montreal as Outremont Park, the 7158 gross ton vessel was a North Sands type "Park" ship until 1946. It was sold to Furness Canada, and operated under the UK flag as Brazilian Prince until 1958, on their South American Prince Line. Federal Commerce & Navigation bought the ship and renamed it Federal Pioneer and it came back to Canadian registry in 1959. It traded to the Caribbean and spent the winter of 1960-61 in Toronto with a storage cargo. In 1961 it began an almost unbroken string of summer northern supply trips (every year from 1961 to 1969 except 1967.) Finally by the late 1960s the ship was on it last legs, and it was sold for scrap. It sailed on its own to China for breaking up, arriving at Hsinkiang in January 1971. When not sailing north it spent most of the rest of the year at Purdy's wharf in Halifax.
For a photo, see my posting on Shipspotting at:
http://www.shipspotting.com/gallery/photo.php?lid=534592
A third Federal Pioneer started life as the Swedish Carl Gorthon in 1971. An ice strengthened ship, built in Finland, it was lengthened in 1974 increasing its gross tonnage from 4937 to 5595. It was then re-engined in 1978. Fedcom , as it had become known bought the ship through subsidiaries in 1980 and it was registered in Halifax as Federal Pioneer. It also was a northern supply vessel and made rare calls in Halifax. In 1985 it became Cecilia Desgagnés and spent all its summers on norther supply work, with general trading or layup in winter. Replaced by more modern tonnage, it was sold in 2007 becoming Master Joy under the Panamanian flag.
There are several photos on shipspotting:
http://www.shipspotting.com/gallery/photo_search.php?query=CECILIA+DESGAGNES&x=28&y=9
Fednav, as Federal Commerce & Navigation has become, is a major Canadian shipping company, but has no ships under Canadian flag. It owns and charters foreign flag ships for its tramp and liner service, and is one of the largest users of the St.Lawrence Seaway.
.
Posted by Mac at 7:52 PM