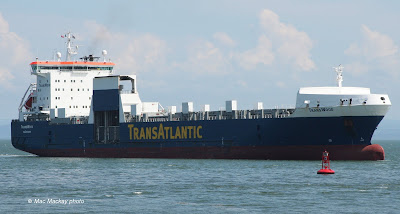 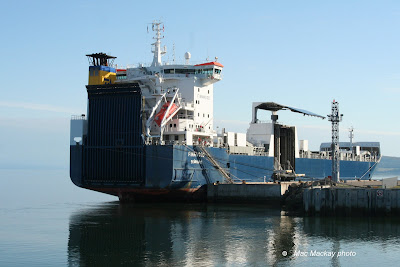 2. The same ship as FinnWood in 2007, with side door open, loading at Pointe-au-Pic. 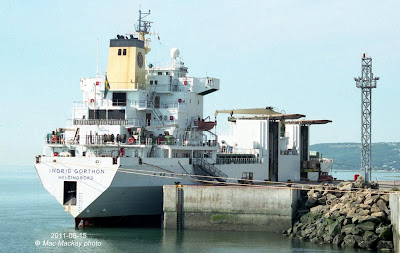 4. As built, Ingrid Gorthon was a bulk carrier. After a hard winter she is tied up in Halifax, in March 1984 to load newsprint rolls using travelling cranes.

With the arrival January 25 of Transwood in Terneuzen, Netherlands another chapter in shipping history draws to a close. There is one tantalizing remnant remaining, but that can’t be for long.
The story starts with the founding of the Gorthon family of shipping companies, in the early days of the 20th century (either 1915 or 1921 depending on your sources.) The Swedish company had many iterations over the years and many owning entities, but its ships bore the Gorthon family name starting in 1924. They developed a specialization in carrying forest products and in the 1930s they began carrying woodpulp and pulpwood for Bowaters in the UK. It was not until after World War II that they began to be seen in Canada, as they built specialized ships for carrying newsprint. Regular callers to many eastern Canada ports, the ships often called in Halifax for bunkers and repairs, particularly in winter. Their distinctive white painted hulls set them apart as quite unique.
The subsequent history of Gorthons is far too convoluted for retelling here, but effective March 2005 Gorthon Lines AB was dissolved as part of a takeover by B&N Nordsjofrakt AB becoming Rederi AB TransAtlantic [RABT].
Since then RABT has gradually disposed of the Gorthon ships, chartering them back for periods of time, before they went off for scrap or other charters. Their new ships were either renamed or named with the prefix "Trans" with one exception. That is Ingrid Gorthon which, at least for the time being still works for RABT.
There are also some other stray Gorthon ships around, but they no longer have a connection with the succeeding owners, and have merely kept their names.
The North American paper business has been in long term decline and in 2011, after several years of poor returns on their transatlantic services, RABT decided to concentrate in other areas, such as European coastal routes, and offshore/icebreaking.
For now they will keep two ships on the North America/South America services, the TransFighter and the venerable Ingrid Gorthon. TransWood, which arrives in Terneuzen January 25, and TransPine will be assigned to European operations.
RABT has its own informative web site, complete with shipping schedules, and corporate history. See www.rabt.se/en/

Ingrid Gorthon was built way back in 1977 as a 10,358 gross tons/ 14,229 deadweight tonnes bulk carrier to Lloyd’s ice class 1A. Its two travelling cranes of 30 tonnes capacity were fitted to load newsprint in rolls.But the ship had large hatches for other bulk cargoes. It was built by Korea Shipbuilding & Engineering Co in Busan. In 1990 it was rebuilt as by Blohm & Voss , Hamburg as a side loader, with two doors and a conveyor/ elevator system for pallets or newsprint rolls. It now measures 12,750 gross tons/ 14,298 deadweight tonnes. Recent photos show that the ship has been repainted with a rusty red coloured hull.
It was sold by RABT in 2006, reflagged to Cyprus and chartered back by RABT.
TransWood was built in 2002 by Stoc. Gdynia in Poland as a RoRo/side loader, Finnwood. In 2006 it was lengthened 23m by Blohm & Voss. It measures 20,851 gross tons and 18,855 deadweight. It flies the Swedish flag, and acquired its present name in 2008.
TransFighter and Transpine are sister ships to TransWood.
The two remaining ships on North American service will shuttle up and down the east coast with paper southbound and recycling paper north bound, with one remaining Gorthon ship hanging in for a few more years - reminder of a once substantial and distinctive fleet.
.
Posted by Mac at 10:25 PM