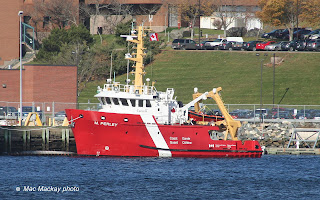 Also unveiled at BIO this week (possibly today) was CCGS M. Perley the last of three new nearshore research vessels completed this year. The photo was taken on November 13, when the ship was perched at the end of the BIO small craft pier. Today it was moved to the main pier face.
Built by Méridien Maritime Réparation Inc of Matane, QC, the three ships were announced in the 2009 budget. Designed by Robert Allan Ltd of Vancouver the hulls are based on the RAStar tug hull, a sponsoned shape which improves stability. See photo and spec sheet at: http://www.ral.ca/news/2012/2012-11-06.html
The first in the series, CCGS Vladykov, named for a late ichthyologist, is 25 meters long and is based in St.John's. It was delivered in August.
Second is CCGS Leim of 18m long, based in Quebec, and delivered in late August. (It was upbound for Quebec City on August 29.)
Third and last is CCGS M. Perley which arrived at BIO on November 13. It is also 18m long and measures 211 gross tons. Date of build is listed as 2010, but it was not registered until October 2 of this year.
Although primarily research vessels, they are multi-tasked to carry out Search and Rescue and pollution/environmental response if needed.