As discussed in my posting of December 18, Algoma Central Corp had determined to build a number of chemical/product tankers for foreign trading, but when the shipyard did not produce the ships on time, Algoma cancelled the orders. Algoma, through its subsidiary Algoma Tankers International Inc submitted its dispute with shipbuilder Jiangxi Jiangzhou to arbitration as per the terms of the contract. The matter was heard in London in September, and on April 30 Algoma announced that the process resulted in a favourable finding for Algoma.In essence Algoma is entitled to refund of the moneys paid in for construction of the tankers before Algoma cancelled the contract. I believe the amount is in the range of $34.5 mn.  How easy it will be to actually get their hands on the money is another matter.

Cancellation of the order left Algoma with only one foreign flag tanker, the previously purchased Algoma Hansa to operate in the Hanseatic pool. The pool was eventually dissolved and Algoma Hansa now trades in the Navig8 pool.
See:  http://shipfax.blogspot.ca/2012/12/sloman-hera-algoma-says-not-better-late.html

Algoma Hansa is the former Amelienborg, sister to Algosea ex Aggersborg. Both ships were built in 1998 by Alabama Shipyard in Mobile, AL and are modern double hull, phenolic epoxy coated tankers of 11,290 gross tons, 16,675 deadweight tonnes. 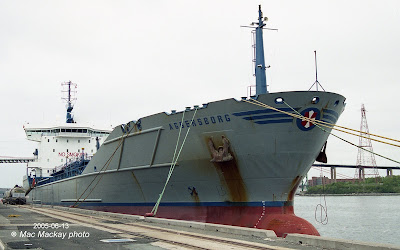 1. Aggersborg on arrival in Halifax. Her bridge wings projected beyond the breadth of the hull - a Seaway no-no.


In January 2005 Algoma announced they had purchased Aggersborg and it arrived in Halifax June 13, 2005 for refit. The work was carried out at pier 9, and involved cutting back the ship's bridge wings  and other modifications to allow it to use the St. Lawrence Seaway. It has largely traded on the Great Lakes/St.Lawrence ever since, although it has made the odd visit to Halifax. It operates in Algoma's seven ship domestic Canadian tanker fleet, Algoma Tankers Ltd. That fleet includes the Halifax bunkering tanker Algoma Dartmouth. 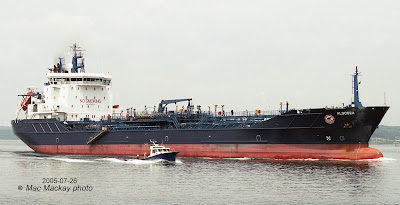 2. After trimming back the bridge wings, and other modifications, repainting and renaming, the Algosea did trials in Bedford Basin and sailed. The launch Captain Jim has just disembarked the compass adjuster.

Sister ship Amelienborg was purchased in 2006 and delivered in 2007. It was put into service at once, under the Bahamas flag, without any Canadian modifications. As a foreign vessel it would now be eligible to come to Canada with full remission of duty if Algoma had the need of another tanker. Interestingly, as an American built ship it would also be eligible to trade in the US under the Jones Act, with a US based owner..

Algoma is still active in China however, with a new fleet of Seaway max bulk carriers under construction. Called the Equinox class, the first ship will soon be on its way to Canada. Named Algoma Equinox it was launched December 24, 2012 at Nantong Mingde Heavy Industries in Nantong, China.