Reefer madness - then and now

Nowadays most refrigerated cargo goes by container, where plug in diesel generators provide shore power and ships are equipped with plug ins and monitoring systems. All the container lines using Halifax carry extensive reefer capacity, not least of which are Zim, Maersk and HAPAG-Lloyd.

Meat, produce, fish and other temperature sensitive cargoes are all carefully climate controlled in containers these days. There are still dedicated refrigerated ships, but even they carry containers.

While in Hamburg in June I was reminded that 'was not always thus. The preserved refrigerated cargo ship Cap San Diego is an excellent example of the late reefer era, when fruit and produce, especially bananas, was transported by fast ship, generally painted white, that were designed for speed more than capacity. Germany was one of the biggest users of reefer ships, with Hamburg being a primary port for refrigerated cargoes. 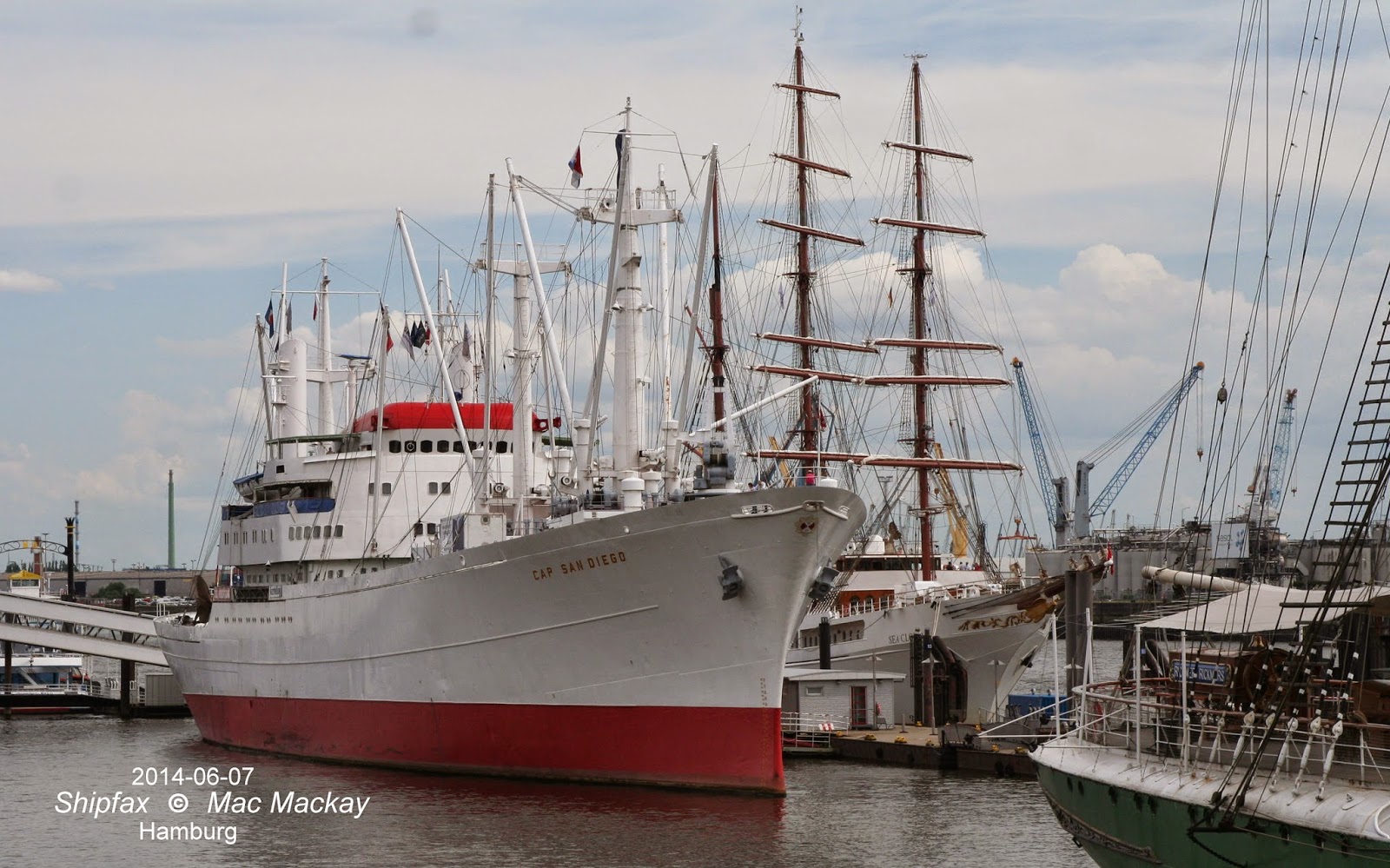 Cap San Diego  is one of several preserved ships in Hamburg.

Many general cargo liners had reefer capacity too - but usually only in one or two holds.

Even in 1984 (Shipfax's featured year this time around) and well into the container era, there were still lots of refrigerated ships calling in Halifax. 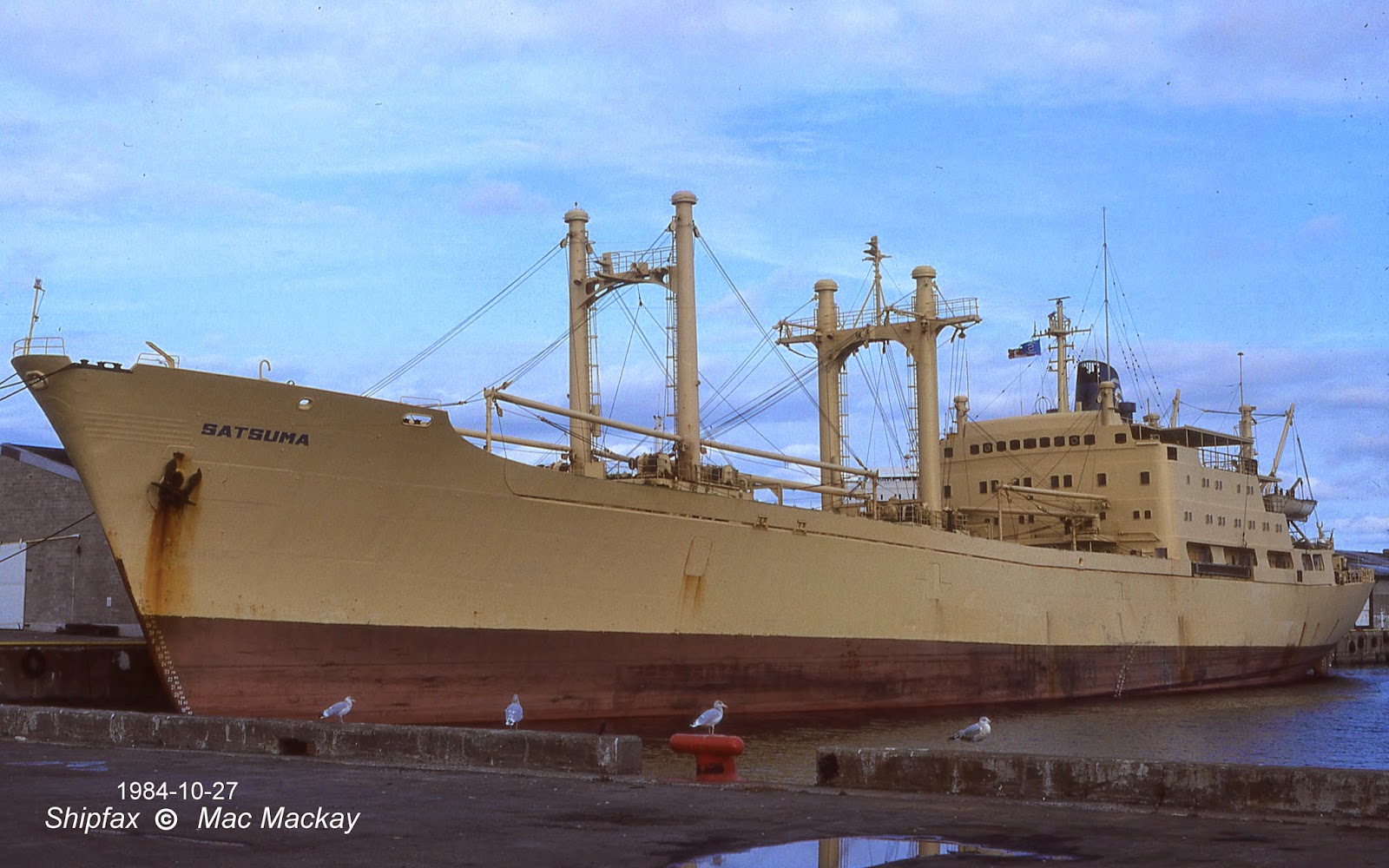 In 1984 Satsuma was operated by Swedish company Salén, but was originally one of the Maritime Fruit Carriers fleet from Israel, named Satsumacore built in 1970 in Norway.

When MFC went into bankruptcy in 1975 due to the collapse of its tanker business, its fleet of 42 attractive modern ships, many with engines 3/4 aft, were dispersed to different owners. Sold again in 1988 and renamed Copacabana, it was damaged by fire in Piraeus in 1993 and broken up in Aliaga, Turkey later that year.

But looking deeper into the shoebox we can find more reefers: 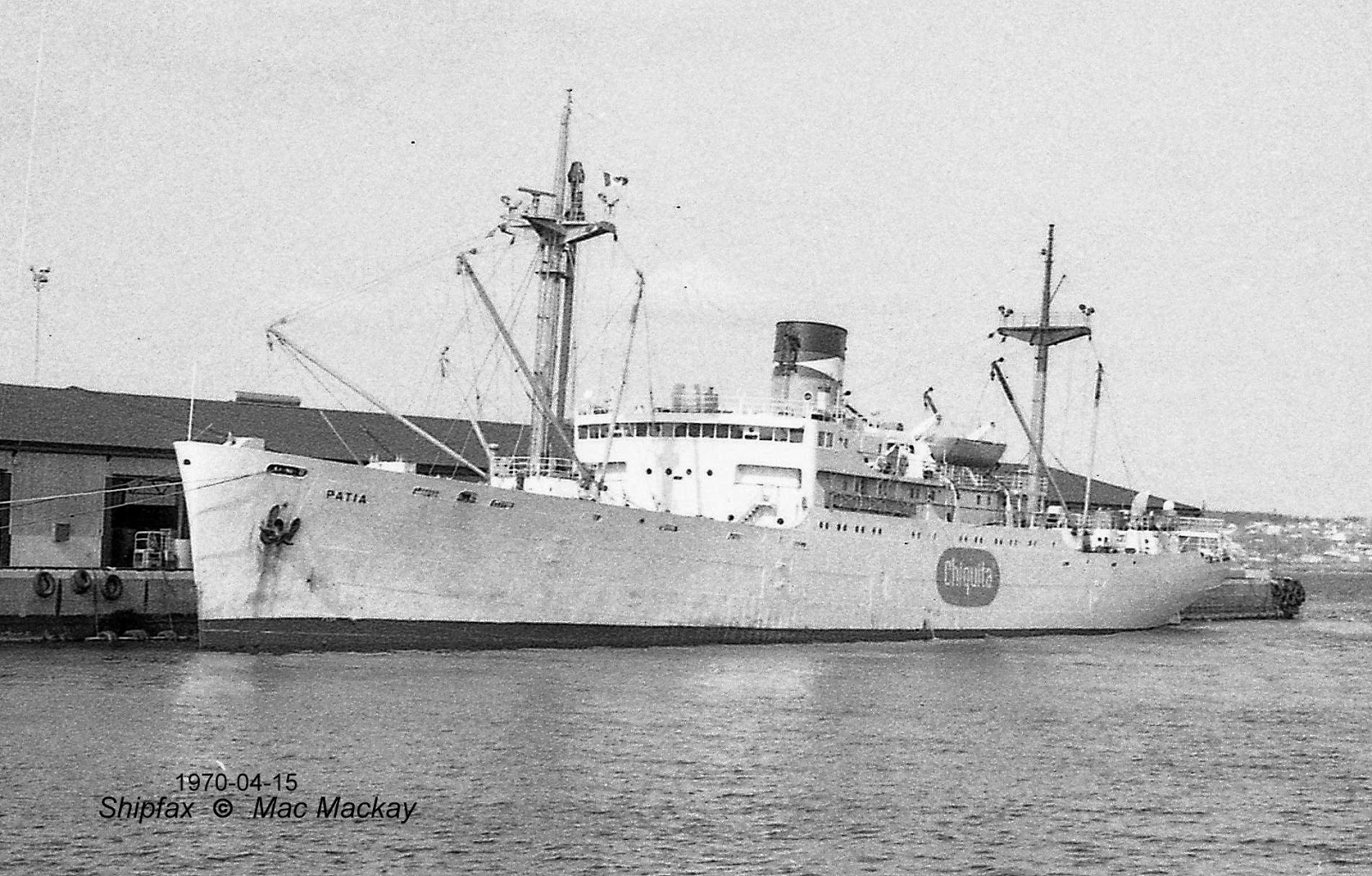 The newly renamed Patia was built in 1947 at Sparrows Point, PA by Bethlehem Shipbuilding
and broken up in Italy in 1972. It had carried the name Yaque until 1970, when it was transferred within UFC to Fyffes Group Ltd. It was in Halifax loading corrugated cardboad to take to South America for banana cartons.
Now known as Chiquita Brands International, the company's shipping arm still exists, and uses its former nickname as part of its corporate identity:   http://www.greatwhitefleet.com/About/AboutGWF.asp

Cuba had a fleet of reefers for exporting fruit and transporting its fish products. Golfo de Guacanayabo was built in Japan in 1978. After a lengthy career, with a variety of names it was broken up in Turkey in 2013.

One well known reefer operator was the Dutch Dammers and van der Hiede. Their Atlantic Star measured 499 tons and was in Halifax to load fish and general cargo for the Caribbean.
From 1964 to 1973 it operated on charter to Shaw Steamships of Halifax. It then had nine subsequent names, and flew the flags of Panama, Ghana and Honduras until removed from Lloyd's in 2012. 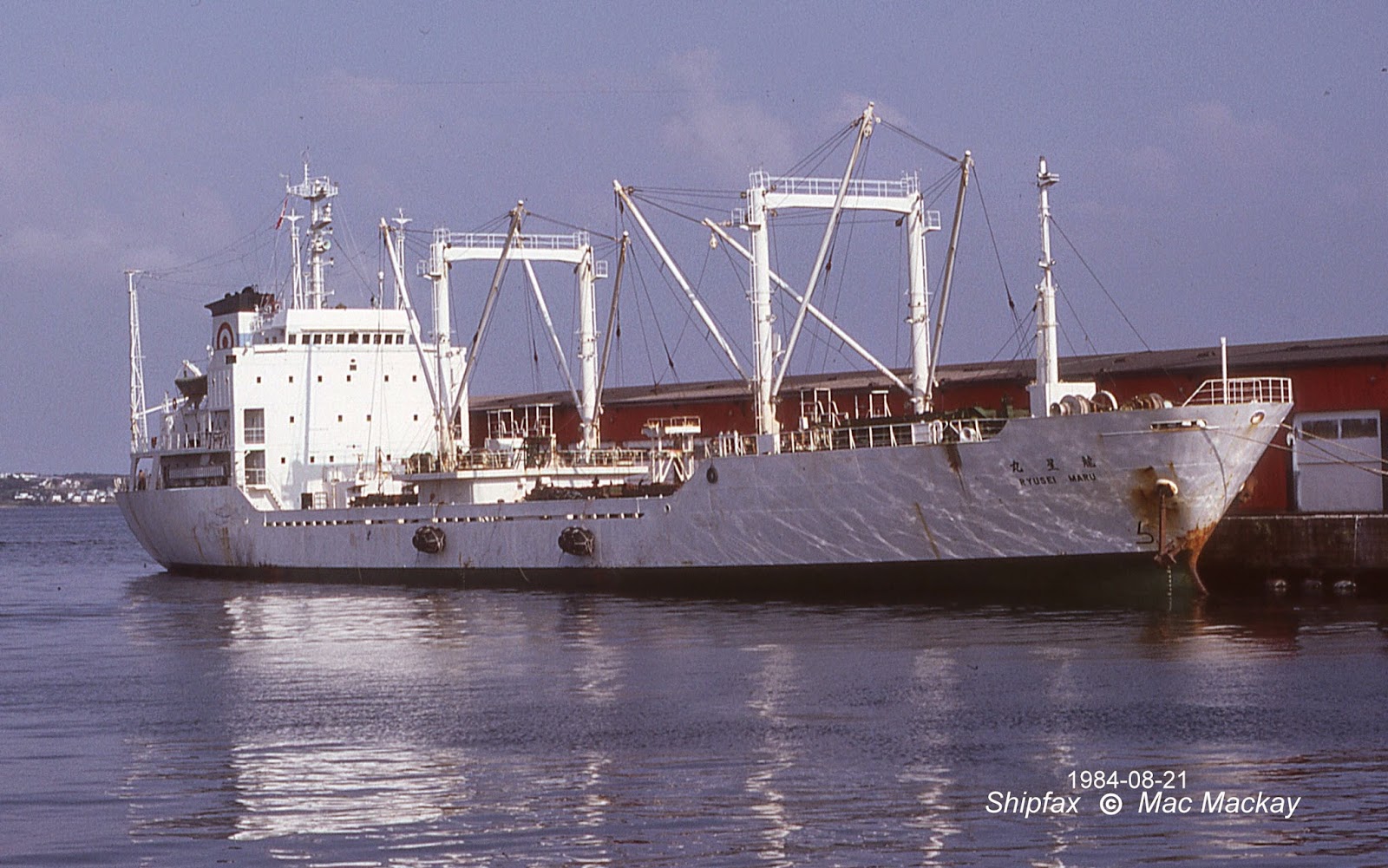 The Japanese were large reefer operators, and Ryusei Maru was in Halifax in 1984 following the tuna fishing fleet.
The most prized tuna catches were airfreighted to Japan, but some went home the long way by sea. However, on this trip, the ship was carrying frozen squid from South America, used to bait the tuna hooks.
In 1995 the ship was converted to a livestock carrier and scrapped in 2011. 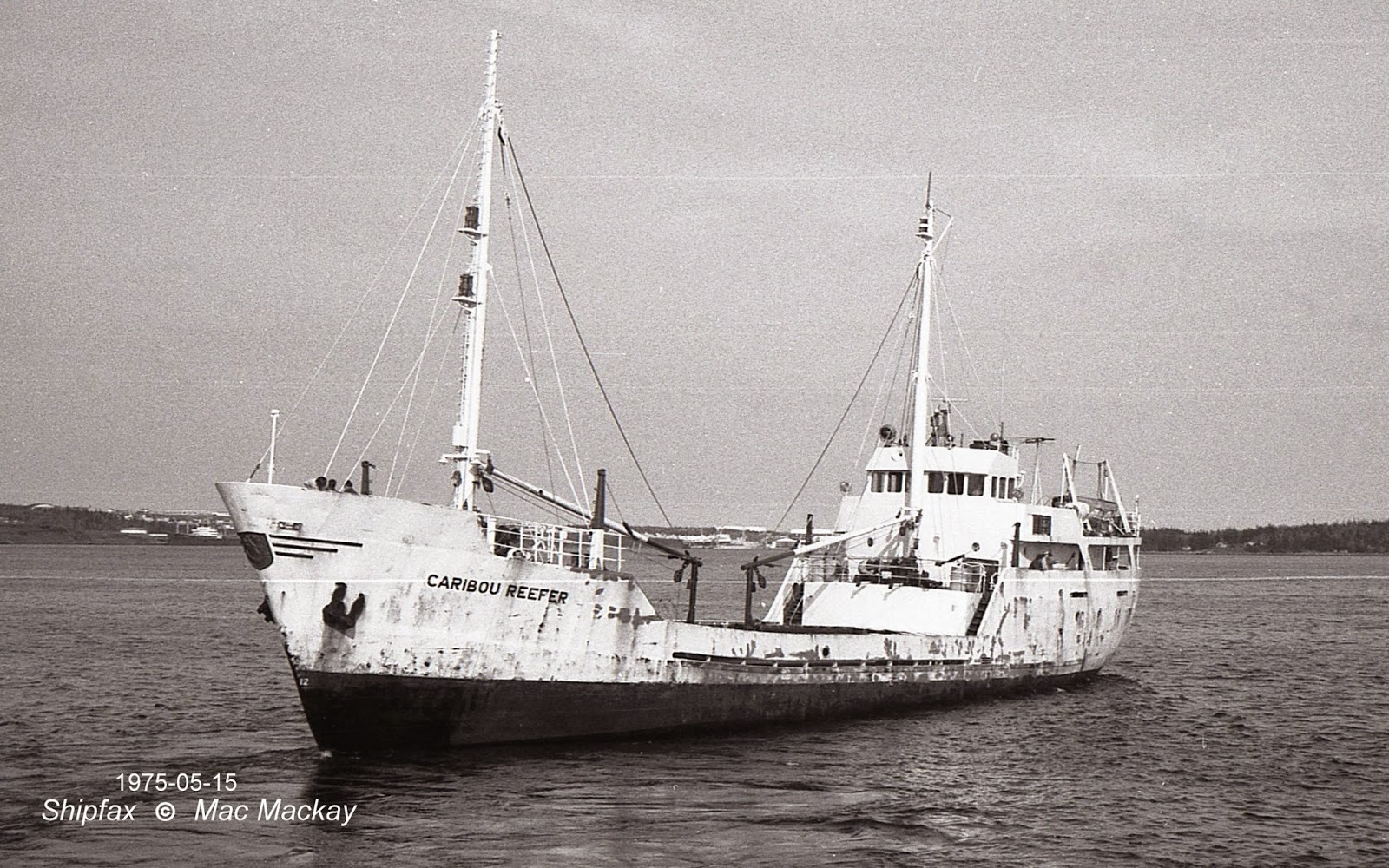 Only a few Canadian ships had refrigerated capacity. Caribou Reefer ran between Newfoundland and Gloucester, MA with fish, returning with produce and general cargo.
It made some trips further afield as well, participating in Northern Supply in 1966, reaching Frobisher Bay.
A 1963 product of Collingwood Shipyard, the 490 tonner was reflagged to the Bahamas in 1976 and was sold in 1979, then carried the names 79: Polar Queen, 80: Toma, 87: El Cancun, 90: Transcargo, 91: Caonabo I. It was removed from Lloyd's in 2012.

Polar Ecuador accelerates out of Halifax in 1979 working up to its 23.5 knot cruising speed.

The best looking reefers ever built in my opinion were the six twin funnel sister ships of the Polar class, of Hamburg-Sudamerikanische D.G. Built by Blohm+Voss in Hamburg, they came out in 1967-68, and featured early computerized engine controls, shaft powered generators, and even a hands free flag dipper. They were plagued with glitches however and their 14,880 bhp Pielsticks had an unfortunate history of crank case explosions. Most were sold after ten years, and went through a variety of owners and names.

Polar Argentina was lost by engine room fire in 1982, Polar Brasil was scrapped in 1986, Polar Colombia lasted until 1998, Polar Ecuador was scrapped in 1985. Polar Paraguay was arrested in Halifax in 1985 and sold at auction, but lasted to 1993. 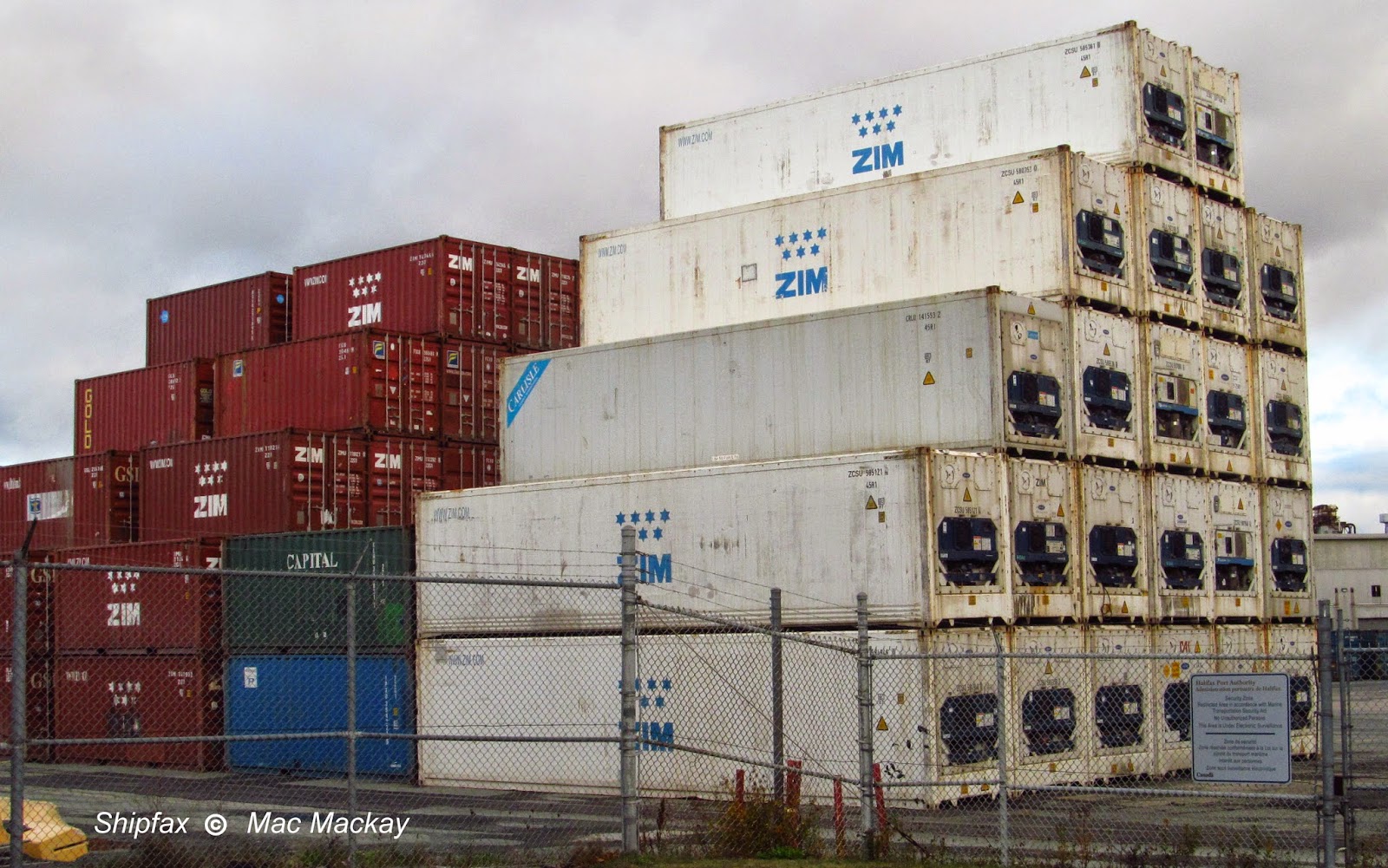 Dedicated reefer ships are not extinct - they still run on many routes, but the reefer can has certainly cut in to their numbers.