Sir Wilfred Grenfell was an important figure in the early days of the last century, and if he is largely ignored or forgotten today, it is time his legacy was remembered. The Canadian Coast Guard has a ship named for him, and that is an important reminder.

As a medical doctor and Christian missionary, he became aware of the plight of indigenous and seasonal fishers on the Labrador coast. Most were malnourished, had no access to medical care, education or commercial prospects. He took it as his mission to correct this, and he raised funds to build hospitals, medical stations, schools and craft industries. By writing about his experiences in the sub-arctic conditions of Labrador he not only raised enormous amounts of money in Europe, Great Britain, Canada and the United States, but he shamed governments into action and became a folk hero himself.

Much has been written about Grenfell, and it isn't my intention to write an exhaustive biography here!

One sidebar to the Grenfell story however, is that ships were needed to support the work in the remote communities, which could not be reached in any other way. From Grenfell's earliest days he depended on ships and boats to bring supplies sufficient to last over the winter season until the ice broke up the following spring. He also made use of a variety of craft as hospital and mission boats and over the years there were probably a dozen or more boasts, ranging from little more than yachts up through schooners to freighters..

Headquarters for Grenfell's work was St.Anthony, on the tip of the Great Northern Peninsula. Although it is located on the island of Newfoundland, it is still very remote and was a logical jumping off point for "the Labrador" which started across the Strait of Belle Isle.

The immense quantities of cargo and supplies needed cargo ships, and the first ones were schooners, usually built in Nova Scotia. Over time they became motorized, and were in fact wooden hulled general cargo ships. The particular type of ship that developed in Nova Scotia, and was built at several yards in Yarmouth, Shelburne, and Dayspring reached its ultimate at the Smith + Rhuland shipyard in Lunenburg. Primarily known for its fishing schooners vessels, it was also the builder of the biggest wooden general cargo vessels and the last one built in Nova Scotia.

The Grenfell Mission operated two of these motor schooners, George B. Cluett (bought in 1929)[it was Grenfell's third boat with that name] and Nellie A. Cluett built in 1941 by Smith+Rhuland. The latter was the typical pattern of the early coaster, flush decked, with schooner bow, long pointed stern and engines amidships and sheathed with Douglas fir. Its seven month season usually involved loading in Montreal, North Sydney, NS and Montague, PE, for Labrador and it often made a winter trip to the Caribbean with salt fish, returning with salt. It then went into a refit to ready it for the next year.

By 1961 Nellie A. Cluettt was showing its age and surprisingly it was to be replaced with another wooden coaster from Smith+Rhuland. They had not built a similar ship since 1949. The demand for those ships had petered as wages increased, timber became costly and insurers became reluctant to cover wooden ships. Steel became available again, and surplus war-built ships were available at reasonable cost. However it may have been Grenfell's long time skipper Capt. Ken Iversen's influence that lead to the decision.
Capt.Iversen of La Have, NS, had been at sea for fifty years, more than 30 with the Grenfell Mission and certainly knew every inch of the waters that he would need to navigate, and the type of ship needed for the work..

Smith+Rhuland had remained busy building wooden fishing draggers of about 120 ft long and 150 grt, particularly for the locally based George's Bank scallop fishery, and so the skills needed were still present in the yard.


Construction of the new ship started in the early spring of 1962 and it was launched September 15, 1962, sponsored by Mrs. Frank Houghton wife of Rear Admiral Houghton, representative of the Grenfell Mission in Canada. The ship was christened Lady Grenfell after the wife of the late Sir Wilfred Grenfell (1865-1940). An American by birth, née Anna Elizabeth Caldwell MacClanahan (189?-1938), Lady Grenfell had given up her American citizenship when her husband was knighted in 1927. The couple had met in 1908 while crossing the Atlantic on the Mauretania and she had become an active participant in the work of the Mission. 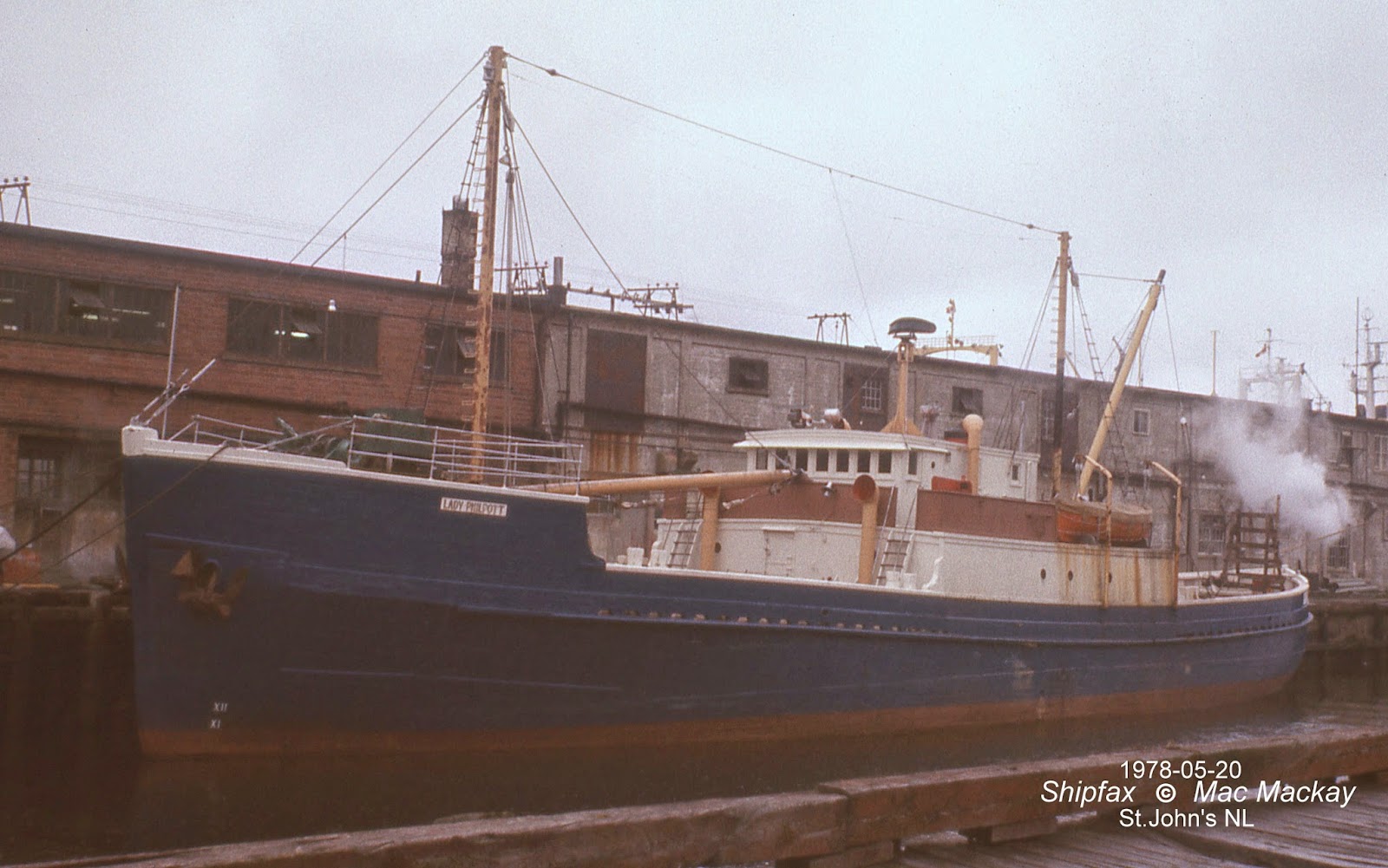 The new ship measured 145' long x 28' breadth and 370 grt, 500 dwt. It received a 640 bhp Fairbanks Morse engine and conducted its first trials trip January 19, 1963. The ship was built with a full forecastle, and plumb bow typical of the later coasters. Its stern was pointed, but less dramatically overhanging than its predecessor.
Lady Grenfell sailed from Halifax May 24, 1963 carrying grain, lumber and other building materials as cargo. The ship seems to have resumed the usual pattern, making three trips in 1964.
Capt Iversen retired in 1966 but the ship remained in service making seven mission trips and seven charter trips in 1966. Under Capt. Cecil Walters, the ship wintered in Bridgewater, NS and loaded out of Halifax. 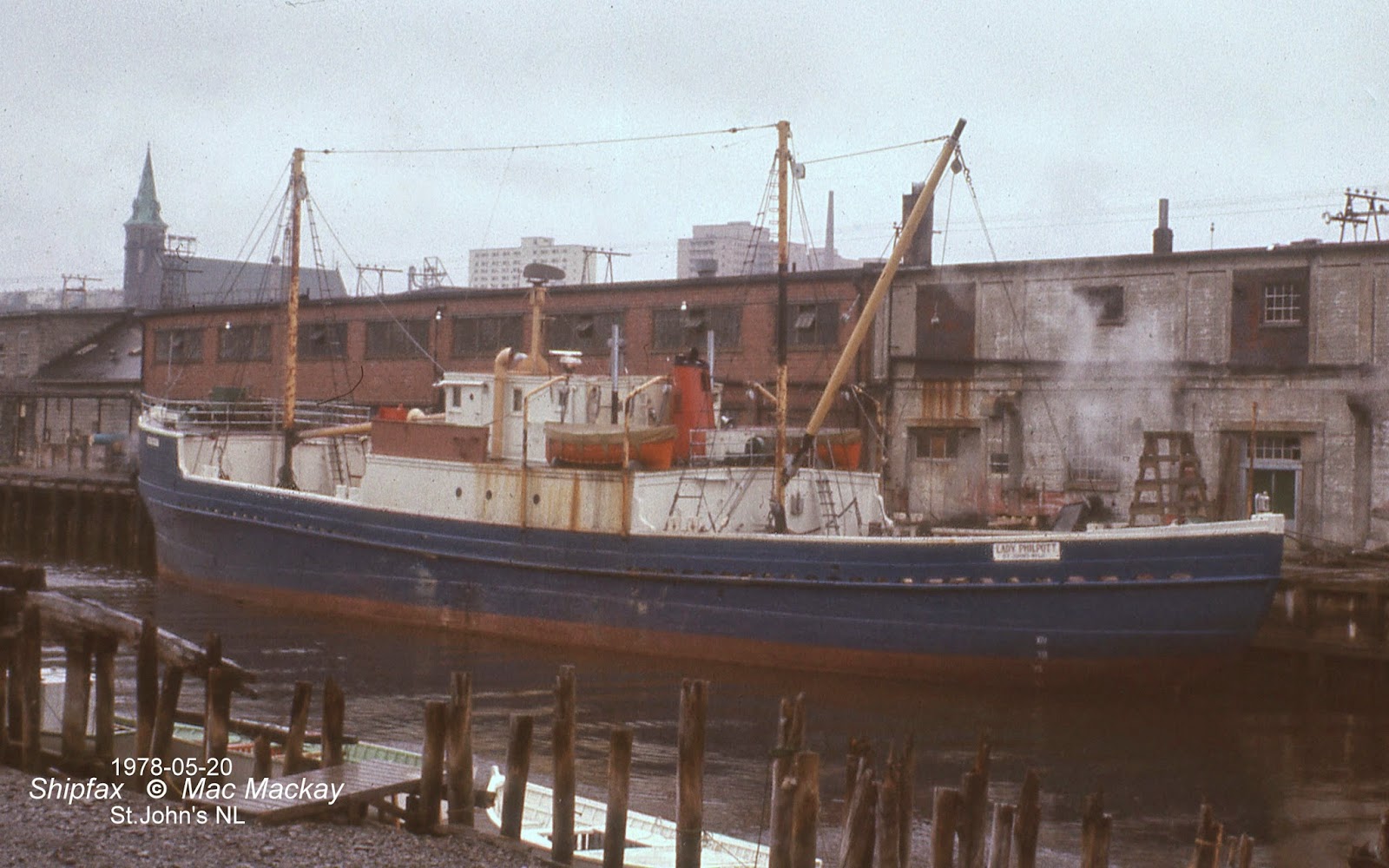 The Grenfell Mission opted to use other ships for its work in 1968 and the ship was advertised for sale in April 1968. It was then purchased by Stephenville Shipping Ltd (Roland G. Bennet) of North Sydney, NS and was renamed Stephenville. Jerry Petite+Sons of English Harbour West, NL  acquired the ship  in 1970 with PHV Shipping of the same port listed as owners from 1973.

Woodrow Philpott of Cottles Island, NL became the owner in 1977 and renamed the ship Lady Philpott. Shortly thereafter Lewisporte Shipyards were shown as owners in Lloyd's Register,and that was the owner listed by Transport Canada from 1979. The ship continued in operation for a time after that, but Lloyd's deleted it in 1994. By then Lloyd's had ceased to list wooden hulled ships generally. Its Canadian register was finally closed March 1, 2008.

In the meantime Philpott had acquired the delightful little Newfoundland built wooden coaster Ambrose Foote which he renamed Lady Philpott II in 1988, so it may be safe to assume that Lady Philpott (i) had been retired by then.

She was the last big wooden cargo coaster in a long series, numbering perhaps thirty ships in all, built between 1937 and 1952 in Nova Scotia.

Smaller wooden cargo ships were built in Newfoundland for a time, but that is for another post.