Left over rough seas and continuing high winds from last night's storm had the Halifax pilot boat off station this morning. As the day wore on conditions improved and the boat got underway at noon. Three ships then arrived in quick succession. All would have arrived Sunday or earlier today.

The tanker Afrodite arrived first and anchored. It was originally due yesterday, but went into a holding pattern offshore over night. 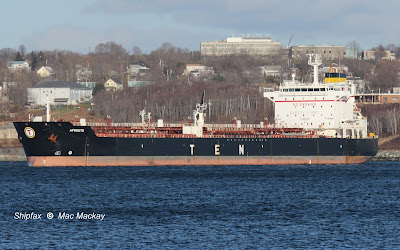 The Afrodite was here at least once before (September 18, 2011) and anchored that time too. The ship is was due in Montreal today, and in Quebec City -  so it will not be  be in port long. Its first stop will likely be Quebec City to discharge, then it will go to Montreal to load at the Norcan pipeline.
A Hyundai Mipo-built handysize of 30,053 grt, 53,082 dwt, the tanker dates from 2005 when it was built as Western Antarctic, a name it carried for only a year. It is now owned by Tsakos Columbia Shipmanagement of Greece, and flies the Bahamas flag.

Next along was EM Kea one of the four ships servicing the joint Maersk / CMA CGM transatlantic St.Lawrence service. The ship represents CMA CGM on what they call the "St-Laurent 1" route. It would normally have called in Halifax on Saturday or Sunday at the latest. It is due in Bremerhaven January 18, so will not waste much time getting back on track. 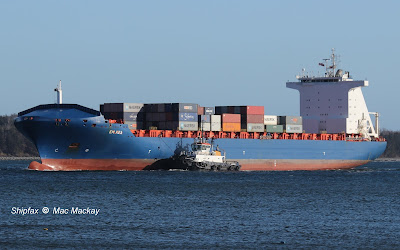 Capable of 22 knots, the ship was built in 2007 by Stoc.Szczecinska Nowa in Poland and is owned by Eurobulk Ltd of Athens. It has been on this route since July 2015, and carries 3108 TEU on its 35,824 grt, 42,166 dwt.
The other four ships on the Maersk / CMA CGM run are Maersk ships, and not nearly as handsome looking if I may be pardoned for saying so.

For me, the highlight of the arrivals was the third ship. Atlantic Runner is making one of the infrequent calls by Atlantic RoRo Carriers. The line, which operates out of St.Petersburg, Russia and serves east coast North America and the Gulf of Mexico, proudly claims to be the largest operator of Astrakhan class ships.
The Astrakhans have been featured here before many times including January of last year

Built for commercial/military use by the USSR, they have proven to be highly versatile ships with their combination of RoRo and LoLo and their own cranes. Fitted for work in ice, and for carrying dangerous cargoes, they also have long endurance ability. 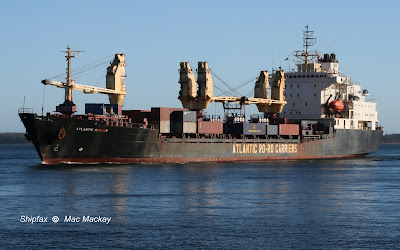 They are getting on it years now, but Atlantic Runner appears to be in good condition and dates from 1992, as part of the Type III variant, fitted with cranes only (the earlier versions also had derricks).
The ships were built by Warnowerft in Warnemunde, it what was East Germany. This one measures 16,075 grt, 18,731 dwt and has five 80 tonne cranes with two pairs that can work in combination. Its modest RoRo ramp is fited on the starboard quarter. 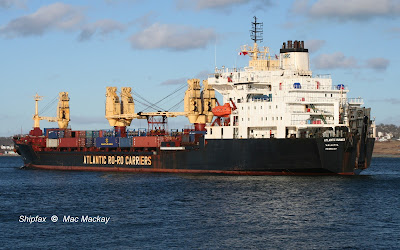 It started life as Krasnograd, but was soon chartered out and renamed in succession: Nordana Kitale, 98: Nordana Kigoma, 99: Nordana Surveyor, 01: Lykes Runner. It became Atlantic Runner in 2004, and is operated by Atlantic Ship Management of Odessa, Ukraine under the Maltese flag.

Speaking of dangerous cargo those tank containers on deck look like they might contain radioactive material, sent from Russia for re-processing in Canada.

Janet C is at pier 27, a member of the growing Carisbrooke Shipping fleet, based on the Isle of Wight.
An open hatch type ship, with box shaped holds and movable 'tween decks, it started life in 2009 at Yangzijiang Shipyard in China. With two 80 tonne cranes it is ideally suited for its cargo of rails from Poland for CN Rail. It was chartered out as UAL Capetown until last year. 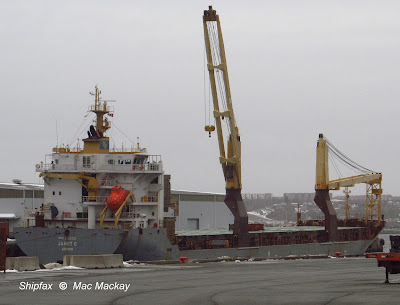 The ship arrived at noon time yesterday, but has not been working cargo, and seems to have attracted a lot of attention from Canada Border Services.

Carisbrooke has an interesting web site that shows ships' positions: http://www.carisbrooke.co/
It is a few days out of date however, since it shows Janet C just passing the Azores on January 2.