The Netherlands flag general cargo ship Singelgracht put in for bunkers this afternoon, but it will have to wait for a while. The bunkering tanker Algoma Dartmouth left Halifax Saturday for point Tupper to load and is not due back in port until tomorrow.

Singelgracht is one of the 14 strong 'S' class built for Spliethoff's by Mitsubishi, Shomonoseki. This one dates from 2001 and measures 16,641 grt, 21,402 dwt. It carries three cranes of maximum 120 tonne capacity, and has removable tween decks. It is also fitted with five sideloading elevators, located on the starboard side - it is the housings for those elevators that look like containers on deck. The 16 tonne capacity elevator platforms are used to load paper rolls or other types of cargo, without opening the ship's hatches.
See the ship's spec sheet and a video: http://www.spliethoff.com/fleet/s-type/ 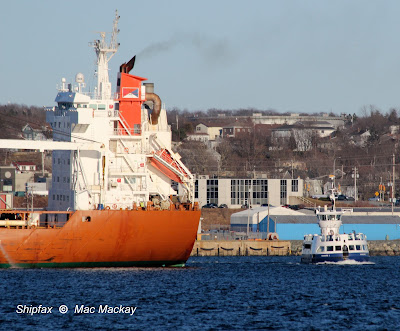 As the ferry Woodside I scoots around the ship's stern, Singelgracht's exhaust scrubber system is visible in close up. The ship has been fitted with the scrubber so that it can continue to use heavy fuel, hence the need for Algoma Dartmouth to go to Point Tupper to top up. Judging by the exhaust plume from the ship's funnel - it looks like it could use a bit more scrubbing!