The port seems to have caught up after the many delays caused by Monday's and  Thursday's heavy snow falls and high winds. Almost every ship was effected, and at one time up to five ships were anchored in Bedford Basin awaiting berths.
Shipfax's mobility was hampered too, so it was not until Saturday that I was able to catch up, thereby missing most of the intense activity.

One of the many container ships that was delayed was NYK Constellation. It was initially due on Tuesday February 14, but put off its arrival until Thursday and even then anchored in Bedford Basin until Friday morning. With Fairview Cove running flat out it was not until Saturday morning that it was able to sail. While I normally avoid wide angle lens photos, the only spot to get a fair picture (without wading into hip deep snow) demanded the 28mm setting.

One ship that apparently did not experience a delay was Hafnia Malacca. It arrived at the Irving Woodside terminal on Thursday  and sailed Saturday morning for Saint John. 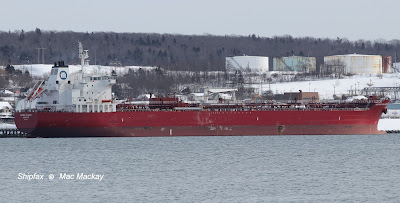 Built in 2015 by Hyundai Mipo, the 24,120 grt, 39,067 dwt ship is on the small size of Mid Range tankers in the Hafnia Handy Pool Management fleet, operating out of  Singapore for the Danish Hafnia company.

Not photographed, was Saturday's arrival of UASC Umm Qasr the first ship on Columbus Loop service in two weeks. The line has reduced winter sailings and is changing partners in the service effective in April. UASC (United Arab Shipping) has been bought out by HAPAG-Lloyd, and although this ship is only a charter to USAC, this may be its last call here as H-L will not be a partner in the service with CMA CGM.

On Sunday temperatures  soared into the plus 7C range, but there was still a heavy snow cover, reflecting a bright sun. George's Island looked spectacular - like a populated iceberg (it is neither). 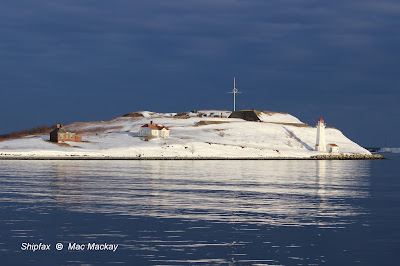 There was quite a traffic jam in the lower harbour as California Highway arrived but stood by east of George's Island until the Autoport berth was clear. It has little time to work since the next ship, Mignon is due tomorrow. An autocarrier of 59,447 grt, 18,644 dwt, it was built in 2010 by Imabari Zosen in Marugame. It flies the Panama flag for Taiyo Nippon Kisen of Kobe and operates for K-line. 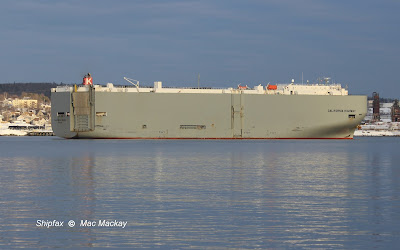 With two tugs on its port side, the ships sits waiting for its berth.

California Highway had been anchored offshore since Friday waiting for Autoport to clear its backlog of shipping. Starting on Monday, the Metis Leader was due, but had to wait Tuesday, it was followed by Oregon Highway on Wednesday, Boheme on Friday, leaving no time for Oceanex Sanderling to load. 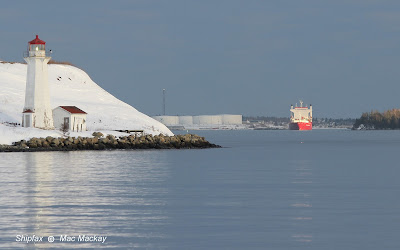 Its normal departure time is Friday evening, but it had to wait until Saturday evening to get into Autoport, and finally sailed late this afternoon, clearing the way for Oceanex Sanderling. 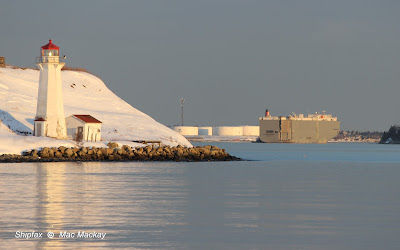 Not long after, Califronia Highway and its two tugs sailed in toward Autoport. 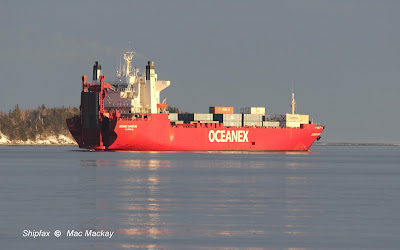 Outbound for St.John's the ship catches some late day sun. 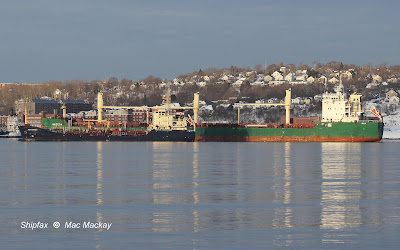 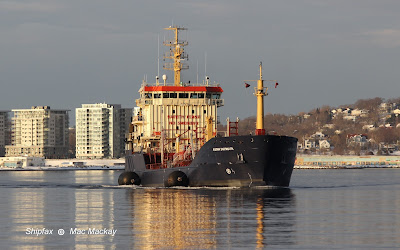 The diminutive tankers carries its fenders permanently to save time while coming alongside ships.

Maccoa dates from 2009 when it was built by Shandong Weihai Shipyard in Weihai China. A bulk carrier of 19,814 grt, 30,898 dwt, it carries three 30 tonne crane. It is one of about forty ships operating for Canadian Forest Navigation (CANFORNAV) of Montreal that are frequent Great Lakes and St.Lawrence River callers. The ship is giving Ilheus, Brazil as its next port of call. 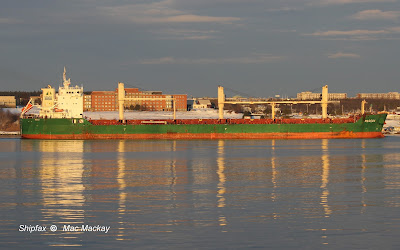 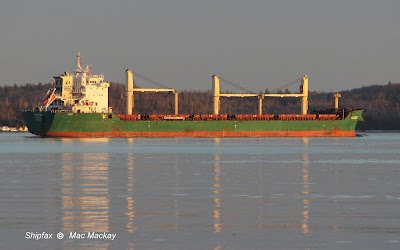