The Narrows - connecting Halifax lower harbour and Bedford Basin is a great spot for close up ship watching. Geologically an extension of the Sackville River, it was carved out by glacial melting, which happened slightly before I started watching ships. 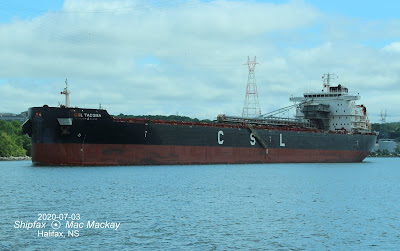 The 71,405.30 dwt ship was built in 2013 and is a versatile self-unloader that CSL Americas operates in a pool with Algoma and Oldendorff.  The company's published spec sheet for the ship rates its unloading capabilities as 6,000 tonnes per hour (tph) for iron ore, 4,200 tph for coal, 4,500 tph for gypsum and 5,000 tph for stone. Its 80m boom can swing 95 degrees out from centre line, allowing it to deposit cargo precisely on shore.

Ships transiting the Narrows pass Pier 9C, the scene of considerable activity lately, related to the decommissioning of the Encana  gas installation off Sable Island. Currently tied up at the pier is the Boa Barge 34 which arrived here in tow of the Boa Odin on June 19:
http://shipfax.blogspot.com/2020/06/boa-and-zims.html 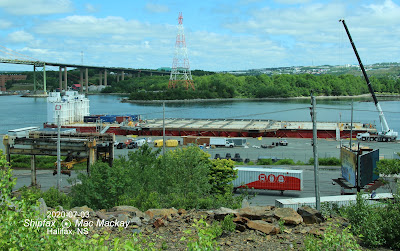 The barge is being prepared to load the Deep Panuke Production Field Centre (PFC), consisting of a 25,000 tonne structure standing on four jack-up legs. The main platform is non-floating but can move up and down on the legs. The barge will be slid in under the platform, which will be lowered onto the deck and the legs raised from the sea bottom. Once the platform is secured, the barge will be towed, likely to Chedabucto Bay.
Unlike much of the rest of the gas field topsides, the PFC may be re-usable, if a buyer is found. Therefore the barge will be used to store the unit for up to a year.
.
Posted by Mac at 5:51 PM