NT Dartmouth off to Newfoundland 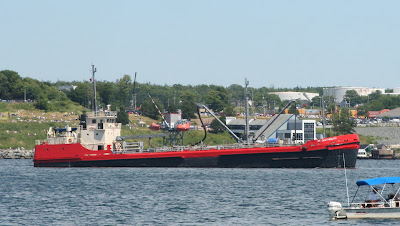 We will soon be bidding farewell to one of the fixtures of Halifax harbour. The bunkering tanker NT Dartmouth, which was taken out of service during the summer and has been laid up ever since, will be leaving for Newfoundland, probably this week.
As a single hulled tanker, she only has four more years to go before the requirements for double hull come into force, at which time she will be obsolete.
For more on this interesting vessel, built in 1970, see earlier posting of May 25.
Not mentioned in that post is a piece of 'non-original' equipment, fitted to her deck. Mounted just forward of the wheelhouse is a grey coloured derrick, which is in fact a hydraulic ladder, salvaged from an old fire truck! The ladder can be used by the crew to reach the deck of a ship if they need to get aboard. I don't believe it has seen much use, but it replaced some very long rigid ladders once carried for the same purpose.
The main derrick, mounted farther forward is used to raise the fueling hoses to the ship's manifold.
In the photo above NT Dartmouth is in the midst of the Tall Ships Parade of Sail July 20, 2009. She managed to get a ringside seat in the event when she was returning to her berth at pier 34, but was held in position for a few hours for the tall ships to pass by.
Posted by Mac at 10:35 AM