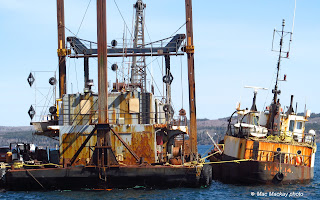 The dredge Rosaire and hopper boat I.V.No.14 got away from Meteghan on April 18 in tow of the tug André H. By the time the flotilla reached the Strait of Canso they had been a problem with the hopper boat, which had taken on a severe list to starboard. (see also Tugfax.) Repairs were underway in Mulgrave on Saturday April 21.


Thanks to comments from readers, it should be noted that I.V.No.9 and I.V.No.10 remain in Meteghan River at the time of writing and will probably form a second transport later on.
These unique hopper boats have an extremely interesting history.
They were built to carry newsprint from Quebec to New York City via the Richelieu and Hudson Rivers. The Richelieu canals dictated their size, including water draft and air draft due to low overhead clearances. The brain child of a man named Guy Toombs, they rejuvenated a long dormant form of transport between the two countries. The fleet was built in 1936-37 by G.T.Davie & Sons Ltd in Lauzon, QC and operated by a subsidiary called Davie Transportation. They were built in two lots. The first for their own account and the second for Quebec Paper Sales & Transportation. They loaded paper in such places as Donnacona, QC, but also on the Ottawa River. They then sailed along the St.Lawrence to Sorel where they took the Richelieu River south to Lake Champlain, joining the Hudson River via the New York State canal system all the way to New York.
By the late 1960s they had become outmoded and Verreault Navigation acquired at least six of the boats. In the end they converted five of them and remarkably all are still in service.
The conversion involved all new accommodation and propulsion, and rebuilding of the cargo hold to hopper space for dredging spoil. The bottom of the hull was fitted with hydraulic doors which could open to dump the spoil. Side tanks and bow space became buoyancy chambers which ensured that the boats remained in balance at all times. It is apparent from the photos of I.V.No.14 that there has been a failure somewhere, likely brought on by deterioration after several years in layup.
It is quite amazing that these 75 year old hulls, now more than 40 years after rebuilding, are still going. 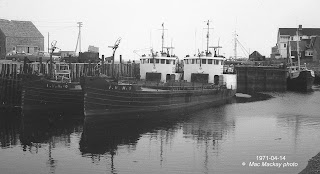 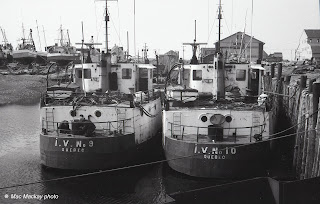 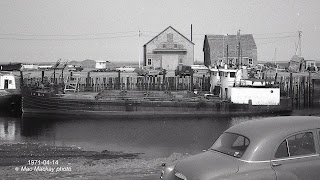 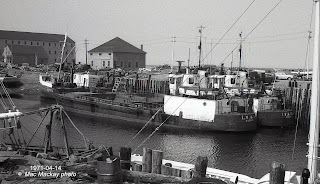 2. to 6. A series of photos taken at Meteghan River April 14, 1971. The boats had completed working at Yarmouth and were refitting before going on to Saint John.
See the excellent coverage on http://bayferryman.blogspot.ca/ for more current photos, in the same area.

I have many photos of these craft at work, most often at Rivière-du-Loup, QC, where sand is washed in to the ferry dock every year by the spring freshet. Snow melting in the Laurentians floods down river well into summer and dredging can't begin until it eases down in July. The sand is dredged up, and moved to a dumping ground downstream, where it will not wash back in. But there is always fresh sand next year!
﻿﻿
﻿﻿