Fifteen years ago - a bargain for $8

On March 14, 1997 I made a little excursion to Prince Edward Island - my last trip through the ice on a ferry. The Confederation Bridge was to open in June of that year and the Marine Atlantic ferry service from Cape Tormentine, NB to Borden PE would shut down when the bridge opened.
I boarded Abegweit as a foot passenger and made the round trip for the grand sum of $8. 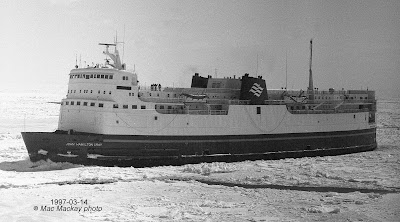 Quoting from my Shipfax newsletter of the March 1997 "John Hamilton Gray left Borden at the same time and appeared to be bobbing and weaving more than we were. Several times we crossed each others' bows as the two ships sought leads in the ice. With a mile or so to go [before we met] both vessels straightened out for a clear port to port passage.
" As the Gray drew abreast the thrum of her eight 12 cylinder Fairbanks-Morses [total 16,000 bhp] was audible in the cold air and her funnels were pumping hazy streamers of hot exhaust."
The return meet was equally exciting as more ice had built in and I can still almost hear the Gray's engines humming.

On a previous winter trip in 1983 I crossed on the Gray and got similar photos of the Abegweit. Her six Rustons totalling 18,000 bhp did not sound nearly as good, but it was an equally impressive crossing with lots of crunching ice.

Both ships were sold off and eventually scrapped despite efforts to find other work for them.
John Hamilton Gray 11,260 gross tons, built by Marine Industries Ltd in Sorel in 1968. Carried 165 cars and loaded and unloaded through a stern door. It was sold to Contessa International Cruise Line, renamed Contessa I, but plans to convert to a cruise ships fell through. Sold to Texas Treasure Casino in 2001 and renamed Texas Treasure for conversion to a casino-also failed. Remarkably the ship sailed on its own from Texas to Alang India, arriving June 29, 2004 where it was broken up. It was renamed Treasure for the delivery trip. Abegweit 13,483 gross tons, built by Saint John Shipbuilding & Dry Dock in 1982. Carried 250 autos and originally fitted with rail tracks for 20 rail cars. Had bow and stern doors. Sold in 1999 to Accrued Investments of Houston, TX and renamed Accrued Mariner for use as a casino in Galveston. In February 2004 it was also sold for scrap, renamed Mariner and also sailed on its own to Alang.
Posted by Mac at 8:30 PM