Despite my dire warnings, it is possible that Algoma Dartmouth may be given a reprieve. She went alongside IT Interceptor at pier 9 November 26, so it is possible that she will be fueling some other ships.  Rumour has it that the last fuel she had aboard was for Oceanex Sanderling but the contract to refuel her expires November 30. Today she moved the short distance from pier 34 to pier 36 to refuel the Sanderling. 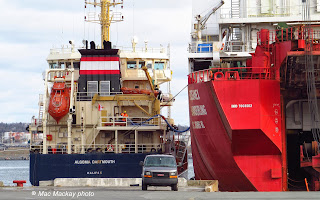 From the advent of steam propulsion, ships have put into Halifax for fuel. A nearby supply of coal in Pictou and Cumberland Counties and Cape Breton could be brought to Halifax by ship or barge and stored here until called for. The Royal Navy was a prime consumer, and there are many wonderful photos of "all hands"- including officers- turned to for coaling ships (and themselves). Another customer was the Nova Scotia Light and Power Co that generated electricity and gas, using coal, at its generating station at the foot of Morris Street.
Sometimes the ships went to the coal, and sometimes the coal was brought to the ships. Similarly N.S Power had a rail spur and a dock for coal. Photos of the coaling scows and barges that carried it are rare, but I have found a couple. 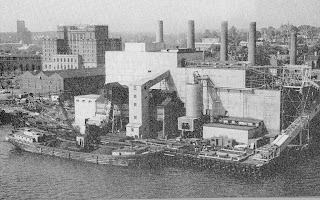 1. Although taken after World War II, this uncredited aerial photo shows a an old  three masted schooner, reduced to a coaling scow, alongside the NSP Light +Power dock at the foot of Morris Street. The scow might also have been used to take coal out to ships at anchor.

2. Another uncredited photo, this one taken at pier 9, shows a giant coal pile, and a ship unloading coal on the right, using a huge shore crane. The ship on the left is probably Ponoka, an old Great Lakes ship brought to Halifax during World War II for bunkering.  On the far left is a cement storage silo and ship unloader.

By the time I reached Halifax, coal was gone and oil was in, but the term bunker and bunkering remain to describe ship's fuel and the process of  fueling a ship. In the intervening years Halifax has had several bunkering barges (mostly self-propelled) but the first one I saw here was I.O.Ltd. No.6 Under the command of Capt. Mike Harrity, it did the same job as the current ship, but had to be moved by tug. Built in 1903 in Port Richmond, NY, for Imperial's parent company, Standard Oil, it was originally called S.O.Co.No.41.
It was used on the Great Lakes, towed by other Imperial Oil ships, but came to Halifax during World War II when there was a huge demand for bunkering ships at anchor.
In 1946 I.O.Ltd. No.6 was transferred to Saint John, but did go back and forth to Halifax under tow. It was retired in 1970 when a new tanker was ordered from Collingwood Shipyard. 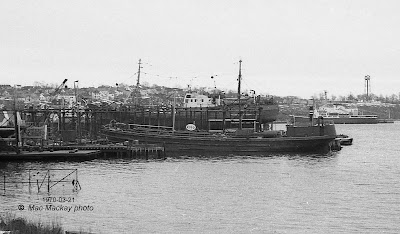 3. I.O.Ltd. No.6  alongside the Dartmouth Marine Slips in 1970 - the year it was retired from service. Note its "woodbine" funnel -it had a boiler to keep the heavy fuel warm. Top Shipspotting marks for identifying CCGS John A. Macdonald at the Coast Guard base in the background. On the adjacent slip is the small Russian trawler Sloboda. 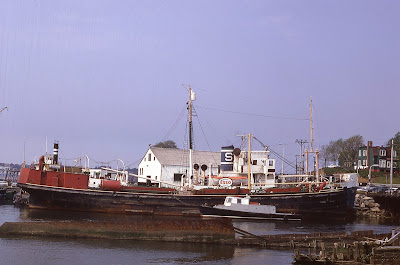 4. The barge was later laid up in Dartmouth Cove side of the Long Wharf, and is seen here in a 1972  René Beauchamp photo alongside the sealer Arctic Bay with a former navy duty boat.

In 1972 the barge was bought by the consortium of McNamara/ Marine Industries/ J.P.Porter for use on the large Grand Traverse dredging project on the St.Lawrence River. It was renamed Grindstone Island and continued in use as a bunkering barge, carrying fuel to the several dredges and pumping stations as they worked. It was laid up after the project was finished, and eventually broken up in by Alpha Demolition at Pointe-aux-Trembles, QC in 1982-at the venerable age of 79 years.

The Nova Scotia Light and Power (NSL+P) generating station at the foot of Morris Street purchased product from Imperial Oil, and Texaco (which also had a refinery here) and it was delivered by conventional tankers, and by bunker barge.


5. A thoroughly disreputable looking Irvingwood was often used to transfer product around Halifax harbour, usually stove and furnace oil from Dartmouth to the Irving-owned S. Cunard dock, adjacent to NSL+P in Halifax. Sometimes, when its engines were acting up, it was moved around by a tug. Technically not a bunkering barge, because it did not carry ship's fuel, it did perform a similar function, but as a shuttle tanker. Built in 1952 as a cargo ship, it was converted to a tanker in 1957 and was finally scrapped in 1987.

Foundation Company of Canada purchased their own bunkering barge in 1962. It had a long history before ever reaching Halifax. Built in 1921 by Soc. Anciens Etab.Henri Satre of Arles-sur-Rhone, France it started life as a dry cargo ship and carried the names Pientre Peintre (1921), Biessard (1921-23) then Poplarbay (1923-37) for Bay Line, later Tree Line, operated by the Ogilvie Flour Hudson's Bay Co.
In 1937 Canadian Coastwisde Carriers Ltd had the ship converted to a tanker by Muir Brothers of Port Dalhousie, ON and renamed her Translake. She was notable for also carrying deck loads of dry cargo in addition to her tanker cargoes. Despite several collisions and a fire, the ship remained in service until 1958 when the opening of the St.Lawrence Seaway made it obsolete and it was laid up.
Foundation bought the ship in 1962, and brought it to Halifax where they rebuilt it at their own yard. They removed the superstructure, but apparently retained a boiler for the heating coils. It was renamed Halfueler and worked around the harbour, often delivering bunker C to NSL+P. It ran aground on Lawlors Island in 1965 but was soon refloated.
In 1973, when Foundation's successors, MIL Tug sold its fleet to Eastern Canada towing Ltd, they kept the barge and it was towed to Sorel where it was to be renamed M.I.L Fueler. It was broken up in 1978 at Louiseville, QC and may never have been used on the dredging project, since its new name was never painted on the hull. For the complete history of this ship (up to about 1978 see: http://www.maritimehistoryofthegreatlakes.ca/documents/scanner/13/04/default.asp?ID=s005
Unfortunately I took only one very poor photo of the ship. It was taken from a great distance, and doesn't enlarge well. 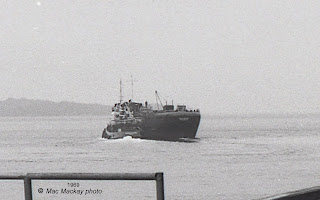 6. Seen here off pier 20 with a Foundation tug on the hip, it has cleared the NSL+P plant and is headed for Dartmouth. 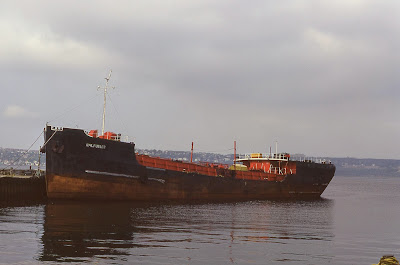 7. Again thanks to René Beauchamp we have have this June 1972 photo of Halfueler alongside what is now the pilot boat dock in Halifax.

While awaiting delivery of their new bunkering tanker Imperial brought in one of their veteran tankers, Imperial Cornwall. Built in 1930 as Acadialite by Furness Shipbuilding, HavertonHill-on-Tees, it operated under that name until 1947 when the fleet was renamed. It became Imperial Cornwall and continued to work on the Great Lakes in summer with some winter work on the coast. In 1965 when Imperial repainted most of its fleet in new colours, it retained the old black hull and red superstructure, which suited it well.It came to Halifax in 1969  (still a steamship itself) to service an Imperial contract to supply bunker C to NSL+P, both at Morris Street, and a new plant at Tuft's Cove. 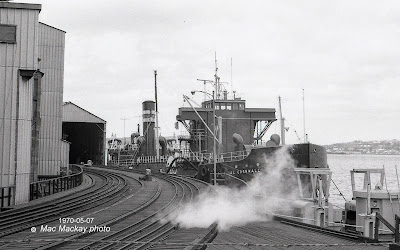 7., 8., 9.,  Imperial Cornwall alongside NSL+P. A photo taken from this location today would show successor company Nova Scotia Power Corp's new headquarters office building, built around the shell of the old power plant. Note the "Queen Mary" bollard in the foreground of photo #9, part of the pier 20 seawall, built to accommodate the largest passengers ships afloat. There was still a railway spur and car dumping shed for coal at the plant in 1970, but it had been converted to oil.

Imperial Cornwall was also used for ship bunkering, but it was not a great success. Its ability to move in reverse (in any predictable direction) was limited, and it took forever to back into position.

10., 11., Imperial Cornwall coming alongside the Gwendolyn Isle at pier 31, made many Full Astern moves before finally getting into position. Pier 31 was used by Dart Container Line before Halterm was completed. Also Volvo brought in boxed car shells and palletized parts to pier 31, using Gwendolyn Isle and other similar ships.

Finally in 1970 the new bunkering tanker arrived in Halifax and Imperial Cornwall was sold in May 1971.It made only two trips for its new owner and was sold at auction in July 1971. Renamed Golden Sable for service through a contractor, to Golden Eagle Refinery in Lévis, QC, it made only one round trip between Lévis and Buffalo, NY when it was condemned as unfit for clean petroleum products.It was sold for scrap and after use as a dock at Louiseville, QC where it was broken up within a few years.

The new bunkering tanker was appropriately named Imperial Dartmouth.and sailed from Collingwood December 2, 1970. It was a hair-raising trip, with storm damage in Georgian Bay, repaired in Sarnia, and reached Lauzon for final fitting out work and handover to Imperial Oil.  When it sailed for Halifax, it was in tow of Foundation Valour in a convoy with other ships, and a CCG icebreaker in the lead. It arrived in Halifax December 23.
12. Imperial Dartmouth passes pier 20 en route to NSL+P.

At 205 ft long x 40 ft wide, it had a capacity of 15,300 bbls with a variety of pumping capacities depending on cargo. With 750 bhp and capable of 8 knots, it was a really a powered barge, with no sleeping accommodation. However its directional propellors allowed it to work in alongside ships with ease. 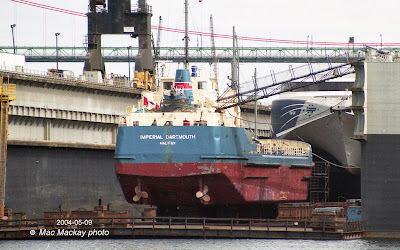 13. Sharing Novadock with the the high speed ferry The Cat, the barge shows its flat bottom and steering propellors, which required no rudders.

Nevertheless it did make some short sea voyages. Twice it went out to refuel the Virgin Atlantic speed record tries, but was towed to Liverpool for drydocking. In about 1994 an aerial device from an old fire truck was installed on deck to ease the boarding of ships.

14. The aerial device was mounted immediately forward of the bridge and could reach the deck of most ships. It also had conventional ladders mounted aft of the bridge 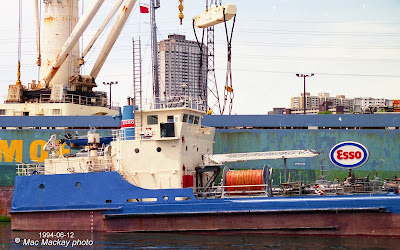 15. The aerial unit worked like a cherry picker, and carried a cage to lift a person. An oil boom reel was also added. Here seen refueling the heavy lift ship Envoyager at pier 23.

In Hurricane Juan in September 2003 the Esso sign was lost overboard. Even though the ship was sheltering at Fairview Cove, it was flying debris and containers that swept the sign over the side.

By 2006 it was the last ship in Imperial Oil's tanker fleet (the others were sold to Algoma) and it was sold to Northern Transportation Ltd. Renamed  NT Dartmouth it was painted green, but carried on with the same work. In 2009 it sailed to Shelburne on its own for refit and returned with a red and black paint scheme. NTCL's contract ended in July 2009 and the ship was sent to Newfoundland where it was laid up until sold in 2012. It is still sailing, as Dartmouth, working as a bunkering tanker in Panama and flying the flag of Honduras.

Algoma Tankers won the contract for bunkering services and bought the present Algoma Dartmouth in 2009 . By this time the Morris Street NSL+P plant was gone, Tuft's Cove was converted to gas, and ships were using less bunker C and more low sulphur fuels.Nevertheless Algoma felt that there was sufficient business in Halifax to purchase this fine ship. Now its future is uncertain.
More on it another time.