Today's arrival at Autoport was the US flag Green Lake. Central Gulf Lines of Mobile, AB is one of several US operators of non-Jones Act car carriers. As US flag, but not US built, the ships are still eligible for preference in carrying US government and military cargo. They also earn their keep on regular trade routes, in this case carrying Dodge vans, which are essentially rebranded Fiats built to North American regulations. 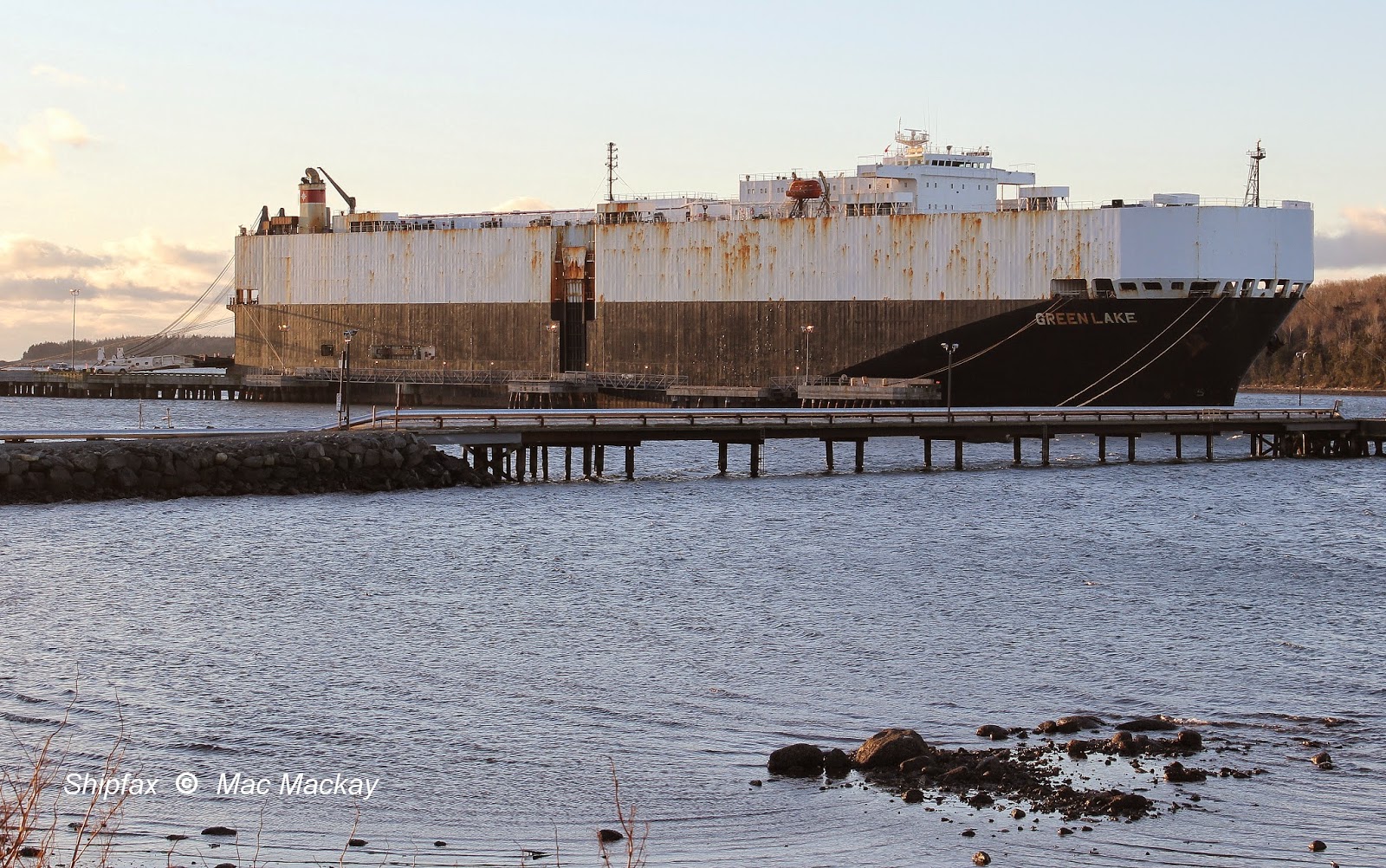 Green Lake with ramp down at Autoport. The McAsphalt jetty is in the foreground, with its heated asphalt pipeline. Notice the boxlike deckhouse, and bridge set well back. Newer PCTCs have adopted the more streamlined appearance of yesterday's Florida Highway. 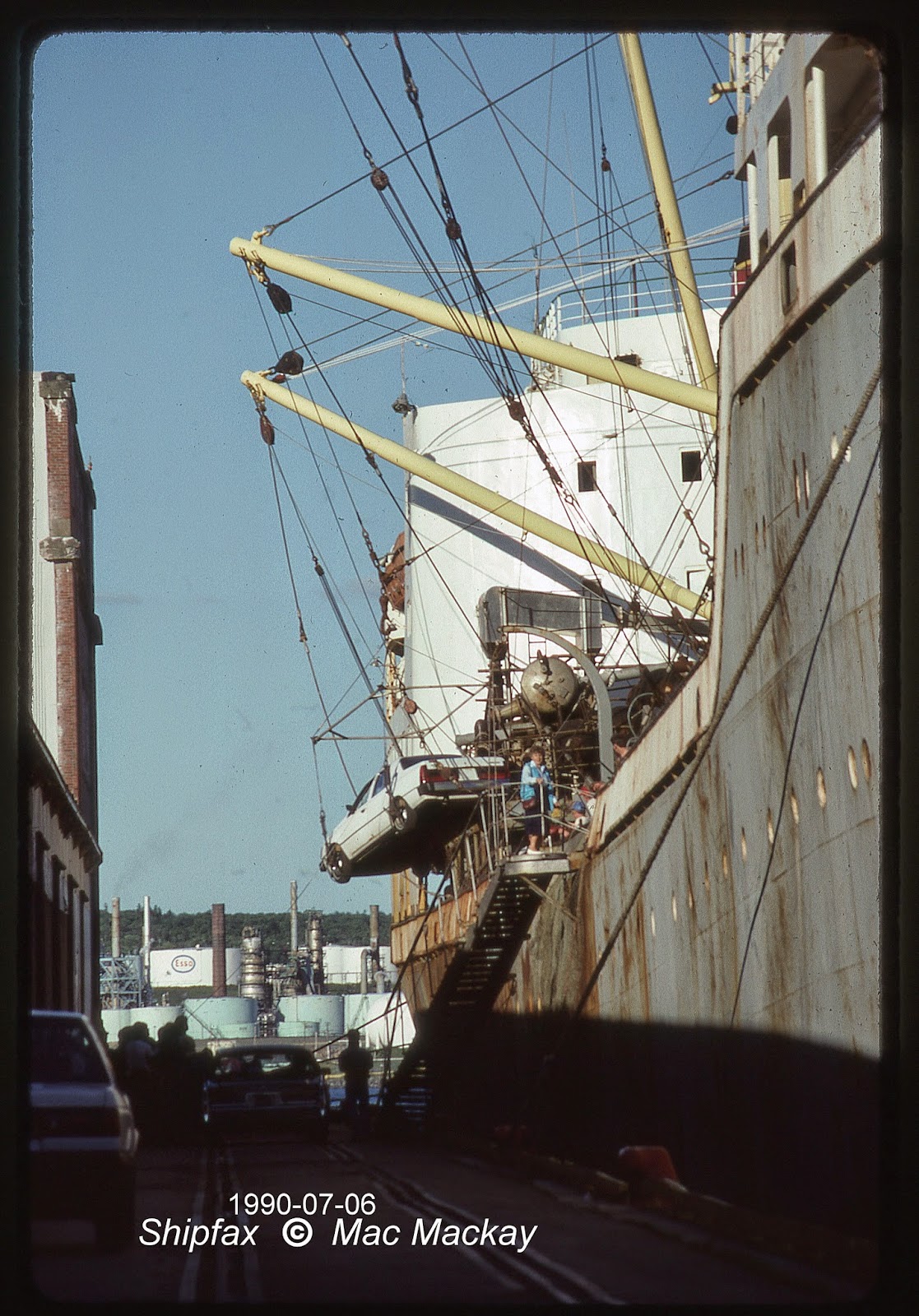 How cars were handled before RoRo. This is a bit of Russian private enterprise at work in 1990. Crewmen on the fishing vessel Sergei Vasilisin bought some used North American cars to take home and sell. The fish factory had lots of derricks and deck space, so they used the old fashioned loading method.

Before there was an Autoport, cars arrived on board general cargo ships and were offloaded in Halifax using slings and derricks. There was much opportunity for damage in handling, but also from other cargo stowed nearby. In one famous case a corrosive liquid seeped onto a cargo of 1958 Morris Oxford cars, etching the paint from the roofs. They were repainted in Halifax with a darker green roof and sold for the price of of a one colour car (two-tones normally cost more.) I know about this because I learned to drive on one of these two-toners - owned by my father.

The bulk shipping operator Anders Jahre of Norway, long an innovator, installed movable car decks in his bulk carrier Jarabella. The ship brought autos to North America, then restowed the car decks and returned to Europe with bulk cargo. The cars were unloaded using conventional derricks, but the masts were set closer to the ships rails than normal to ensure a good reach ashore. 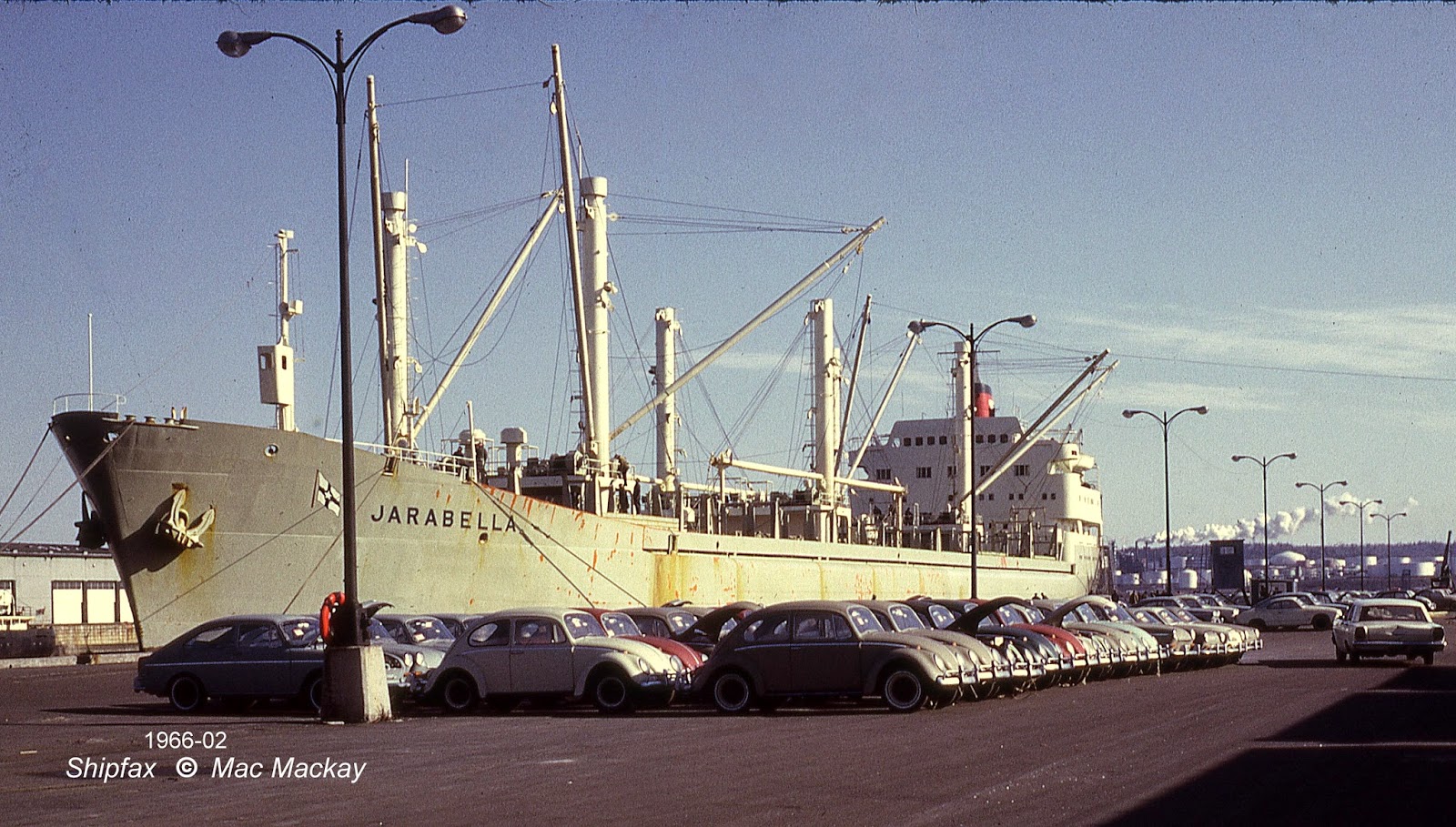 No points will be awarded for guessing the brand of cars Jarabella unloaded at pier 30 in 1966.

Jarabella, 13,173 grt, 19,650 dwt, built 1963 by Kaldnes MV of Tonsberg. lasted until 1993 when it was broken up on this day, December 30, in Nantong China. In 1972 it was renamed Atlas Counsellor and sailed for Hyundai International Inc of South Korea, long before that company was known here for its cars!

The infamous Russian Lada automobiles were imported to Canada for a number of years. They arrived at Autoport on USSR flagged ConRos, among them Ivan Derbenev*. Its 242 TEU capacity was also used, but its car decks were full of Ladas, and some heavy machinery was carried on the weather deck. Its bow door, a feature more often seen on ferries, was connected by ramps and hatches all the way to the weather deck.

Point Valour assists Ivan Derbenev on its approach to pier 31.

Once alongside the bow visor was opened and the ramp extended to the pier. On this trip, the ship also loaded containers (note they are stowed athwartships), but it did make calls at Autoport alone.

Measuring only 3987 grt (under tonnage mark regulations) it was later remeasured at 8,467 grt under new regulations when the car decks were classed as enclosed space for tonnage purposes. In May 1991 it loaded 270 used cars in Milwaukee and 50 in Detroit to take to Poland and the USSR respectively. There was quite a trade in used North American cars for time, but that seems to have faded now.
The ship was sold to Dutch operator Vanuden RoRo and operated as Delfshaven from 1999 until it was broken up in Alang May 22, 2001.

As a finale to the Autoport story, here is the scene this morning with yesterday's Audis clogging the lots.

* Lloyd's Register shows the ship as "Ivan Derbenyev". Transliteration issues persist with Russian names, but I believe that the ship's namesake was an early 20th century satirist and cartoonist, and his name is usually rendered as Ivan Ivanovich Derbenev.
Posted by Mac at 7:15 PM