The annual winter closure of the St.Lawrence Seaway brings to an end to memorable year. Mammoth amounts of grain, early season severe weather made for heavy traffic at times and few idled ships on the Canadian side.
The most notable events in my mind were the retirements of several veteran ships and the introduction of some new ones, with more to follow for 2015.As the largest Canadian operators, Algoma and CSL figure heavily in these developments.

Among the retirements is the last steam powered ship in commercial trade under the Canadian flag. That is the laker Algoma Montréalais, which was due to retire at the end of the 2013 season.  Its reprieve, thanks to the heavy grain run, has now ended.

The remarkable ship was built in 1962 as Montrealer, but was christened as Montréalais when it was completed. The mid-body and stern were launched by Canadian Vickers in Montreal October 19, 1961 and the bow October 25, 1961 by G.T.Davie + Sons in Lauzon. The two portions were joined in the Champlain graving dock at Lauzon, and the completed ship was christened at Canadian Vickers in Montreal.

With the opening of the St.Lawrence Seaway in 1959, new opportunities for shipping came about. Not one to miss a chance, the legendary Phrixos B. Papachristidis used a novel financing approach to create a small laker fleet. Redeeming credits form the war-built standard ships, he had shipbuilder Canadian Vickers of Montreal holding title, with Papachristidis as operator and contracts with whiskey makers Hiram Walker + Sons (a grain customer) as investor/guarantor. Meanwhile Papachristidis ordered an additional ship from Saint John Shipbuilding + Dry Dock. In 1965 the Irving owned company then established Eastern Lake Carriers Ltd jointly with Papachristidis and owned and operated his fleet until 1972.

To finance a new venture in bulk carriers and tankers, Papachristidis (and Irving) sold the fleet to subsidiaries of Upper Lakes Shipping in 1972.  The ship was not renamed, and with sister Québecois continued in operation.

When Upper Lakes Group sold its ships to Algoma Marine in 2011, the ship was renamed Algoma Montréalais. Over the winter of 2012-2013 it received the cement handling equipment from sister Québecois which went to the scrappers.

Most Great Lakes ship were moving to diesels by the 1960s, but this one was powered by a durable Canadian General Electric steam turbine plant, probably due to favourable financing from CGE. However the ship's days were numbered due to the requirement to burn heavy fuel. The new pollution regulations which will come into effect in 2015 mean the end of heavy fuel ships that can't be converted. New ships are also on the way from China for Algoma and these will take up the role of  this memorable ship.


Another Algoma ship, with closer connections to Halifax has also been removed from Canadian service, pending sale to overseas owners.The coastal tanker Algoeast arrived in Sydney, NS December 25 and moved from the government dock to Sydport on December 28.

Built in Shimoneseki, Japan by Mitsubishi Heavy Industries in 1997, owners Texaco Canada Ltd had to get a special government waiver to build the ship in a non-Commonwealth country, since all eligible yards were fully occupied with work. Measuring 8545 grt and 9657 dwt, the ship was powered by a 5300 bhp B+W Hitachi engine driving a single controllable pitch prop. As Texaco Brave it traded all over eastern Canada, often to Halifax, where Texaco had a refinery in Eastern Passage. 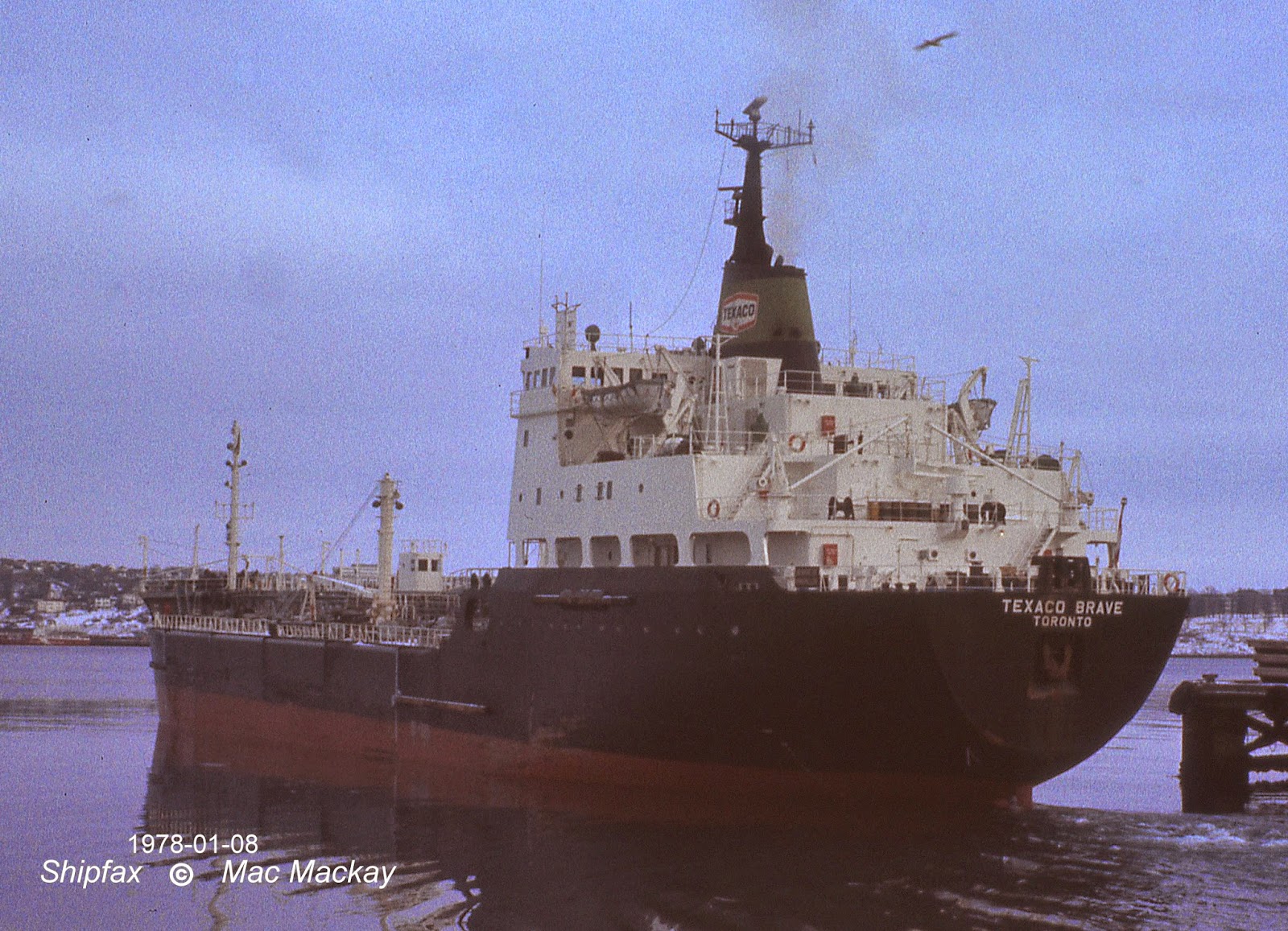 After a brief Christmas layover at Purdy's wharf in Halifax, Texaco Brave gets under way.

In 1986 Imperial Oil took over Texaco Canada, but did not need the ship. It was leased to Sofati / Soconav (which had taken over Branch Lines) for ten years. 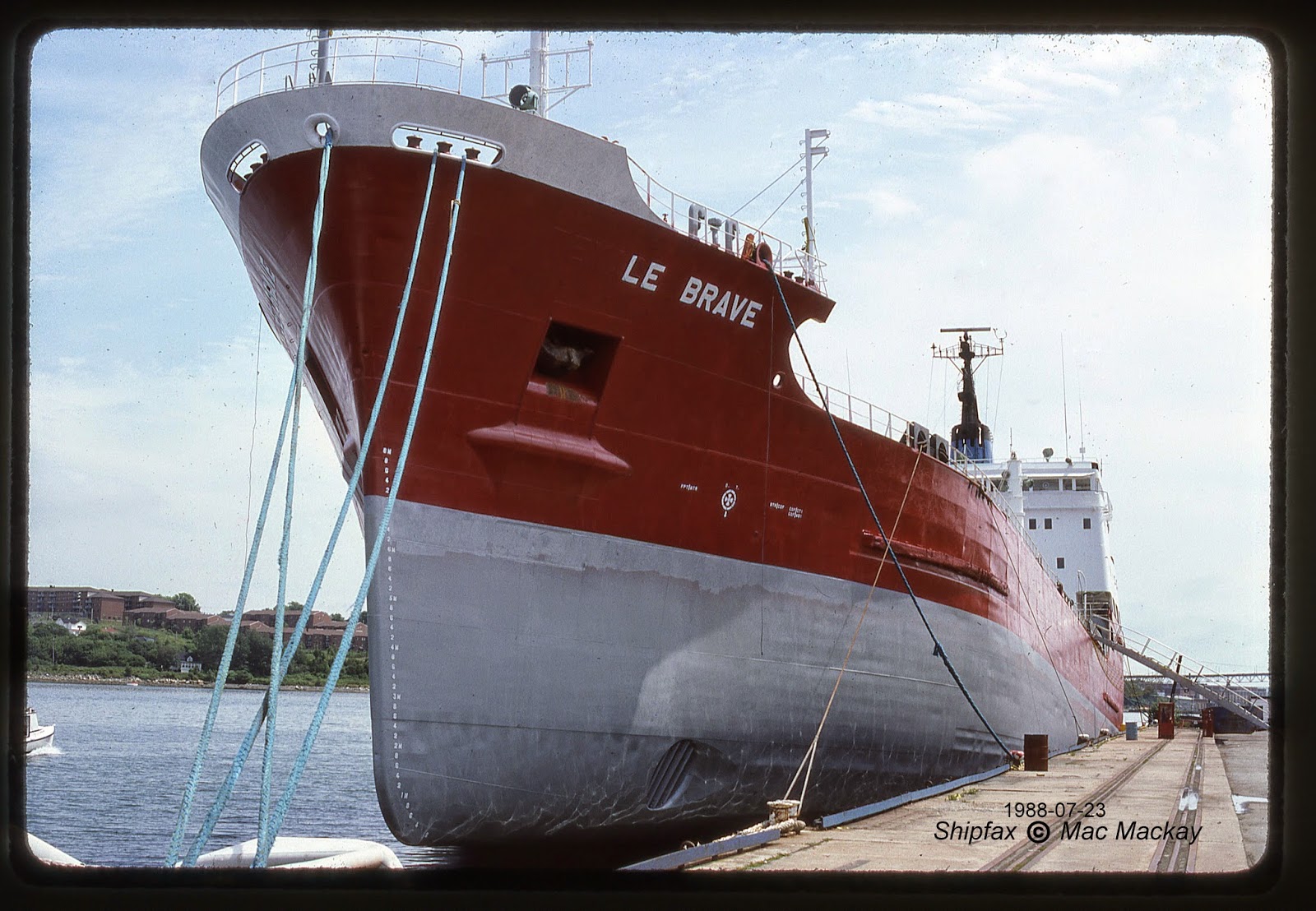 At pier 9 in Halifax, the newly renamed Le Brave shows off her red hull colour, with aluminum anti-fouling paint. High out of the water the bow thruster is exposed.

Renamed Le Brave in Halifax, the ship traded all over eastern Canada. Imperial had to sell the Halifax Texaco refinery to Gulf Canada, and the ship called there among other places. Sofati/Soconav was renamed Socanav, and management of the tanker was assigned to QMT Tankers in 1993. In 1996 when Sofati became insolvent, the ship was laid up in Sorel and the lease could not be renewed. Operation reverted to Imperial Oil. 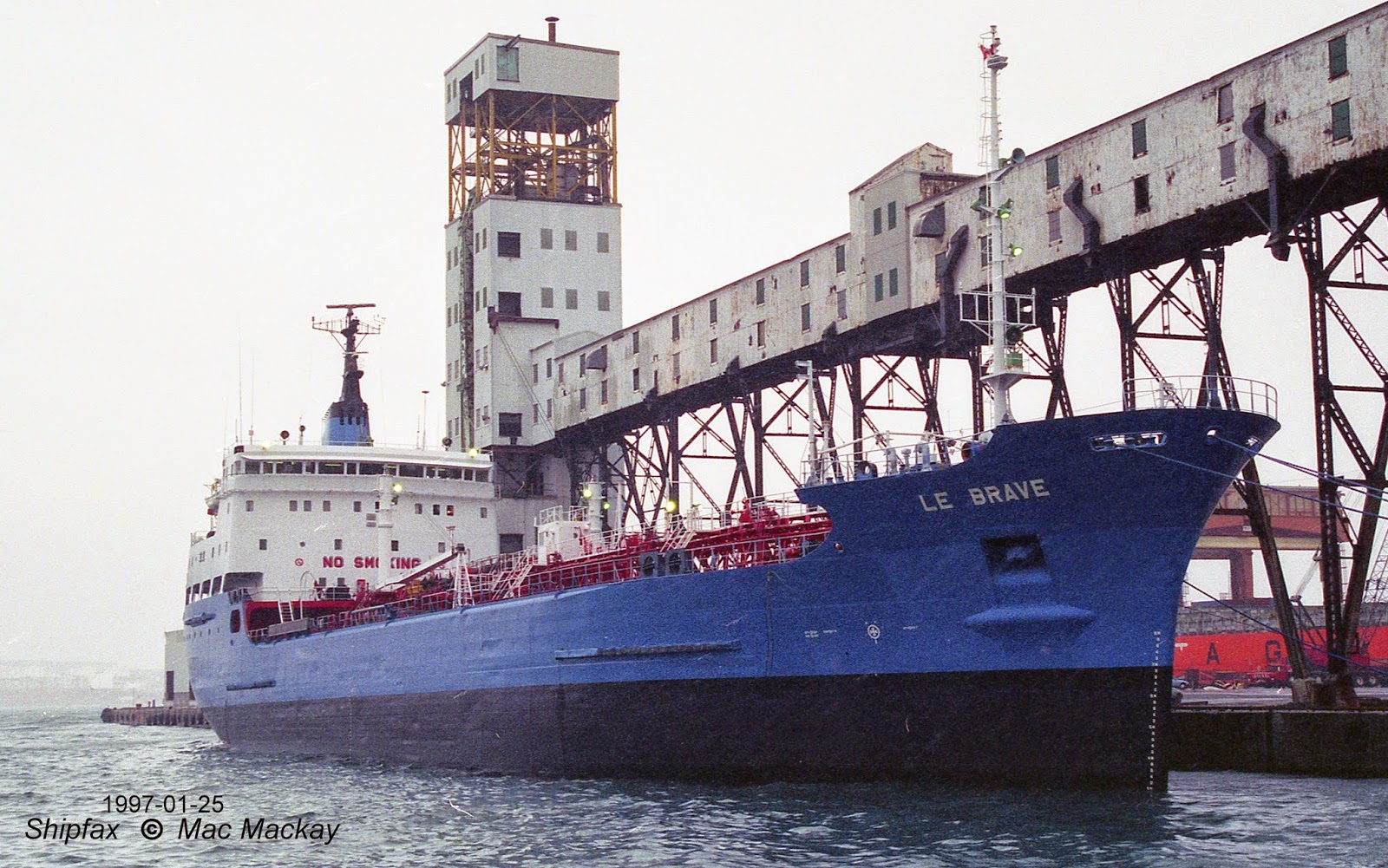 Fresh out of drydock in Imperial colours, but still called Le Brave, the ship is idle at pier 25-26.

It arrived in Halifax in December 1996 and after a refit at Halifax Shipyard, it emerged in January 1997 with a blue hull and in February was renamed Imperial St.Lawrence (ii). The ship worked on the Great Lakes, but also on the St.Lawrence with some coastal operations. 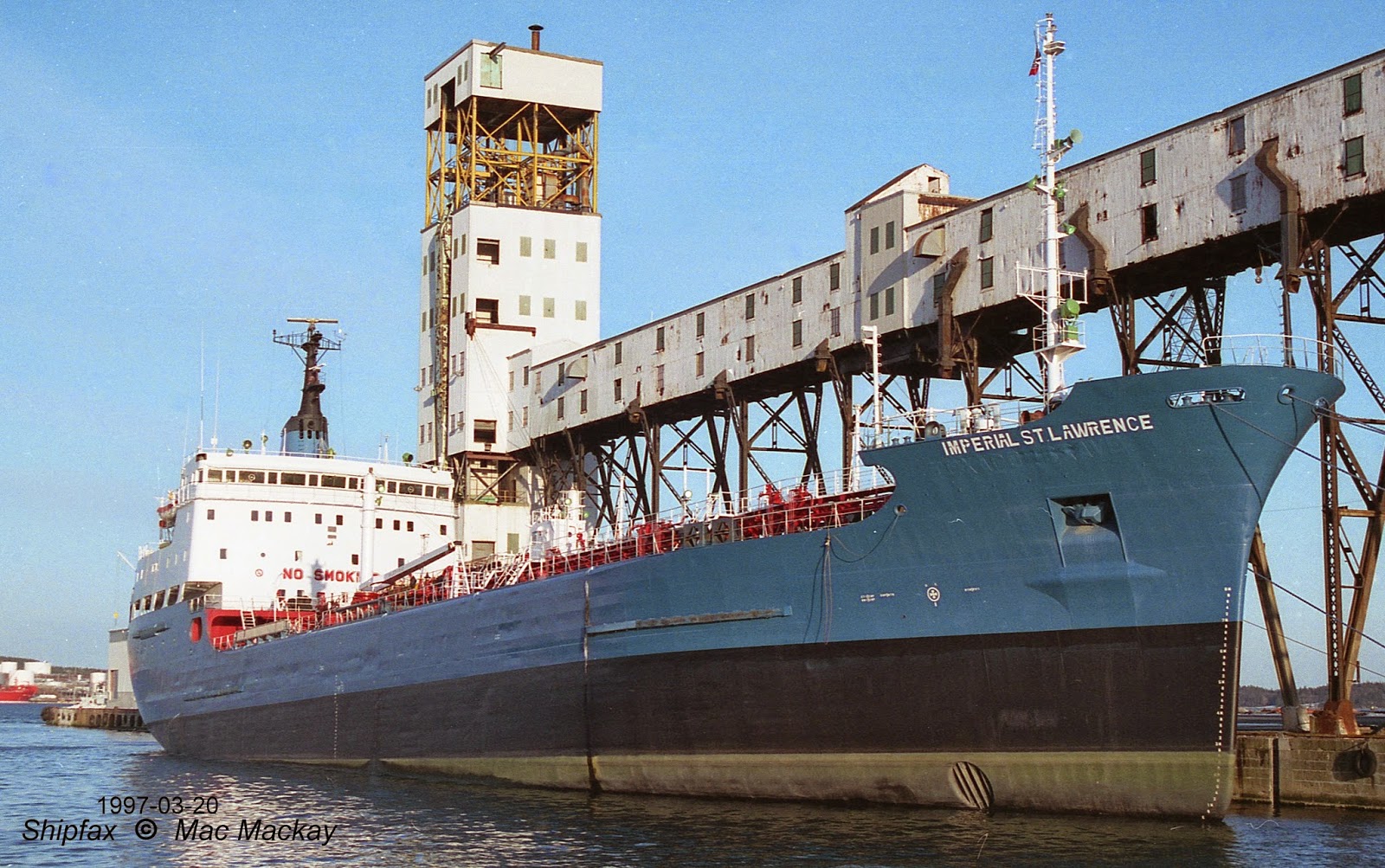 Socanav was declared bankrupt, clearing the way for Imperial to rename the ship. The blue colour is the same, but appears brighter in the sunshine.

In 1998 Algoma Tankers Ltd was formed to take over the Imperial Oil fleet, along with a contract to move Imperial Esso products. Renamed Algoeast, the ship's routine changed little. Over the winter of 1999-2000 it went to Port Weller Drydock where it was converted to double hull, essentially by building another skin inside the ship's frames. Gross tonnage thus became 8471, but deadweight was unchanged. Its trade was mostly on the Great Lakes and St.Lawrence, but in the winter of 2006-2007 it worked out of Halifax.

In 2014 Algoma brought the newer tanker Algoma Hansa under Canadian flag, and with Imperial's refinery in Dartmouth closing, there is apparently not enough work to support this ship anymore. No details are available yet on the ship's new owners, flag or name.