Back before container ships, there were general cargo liners, which operated on regular routes, although sometimes their schedules were flexible. In Halifax the array of general cargo ships calling on a regular basis was quite astounding by today's lights - particularly in winter.
One particular line that always made an impression on me was Elder Dempster Lines. Messrs Elder and Dempster first formed a partnership in 1868 in Liverpool, and began service to West Africa in the early 20th century. Admittedly, Halifax is not directly en route to West Africa, but their ships called here monthly and loaded a variety of goods, both general cargo and some bulk.
The most common Elder Dempster ships in the 1960s and 70s were their "D" class, but we also saw their "F" class. These were superb British general cargo ships of the highest class, fully outfitted to carry any and all cargoes to and from Africa.  In 1965 ownership of Elder Dempster had been taken up by Ocean Steamship Co Ltd (Blue Funnel) but the company identity was preserved. Shaw Savill + Albion Line stock was transferred to Elder Dempster in 1970.
I needn't go into a detailed history of Elder Dempster, particularly when there is such an excellent web site does just that:

However I will go into the story of some of the ships, in the chronological order of my sightings. All of the photos were taken after the Suez Canal was closed by war in 1967, and the company ceased it trade with Burma. Elder Dempster also served New Zealand, and had to do so by way of the Cape of Good Hope, but this as an extension of the West African service. In the late 1960s and into the 1970s, there was one ship a month from Elder Dempster calling in Halifax. 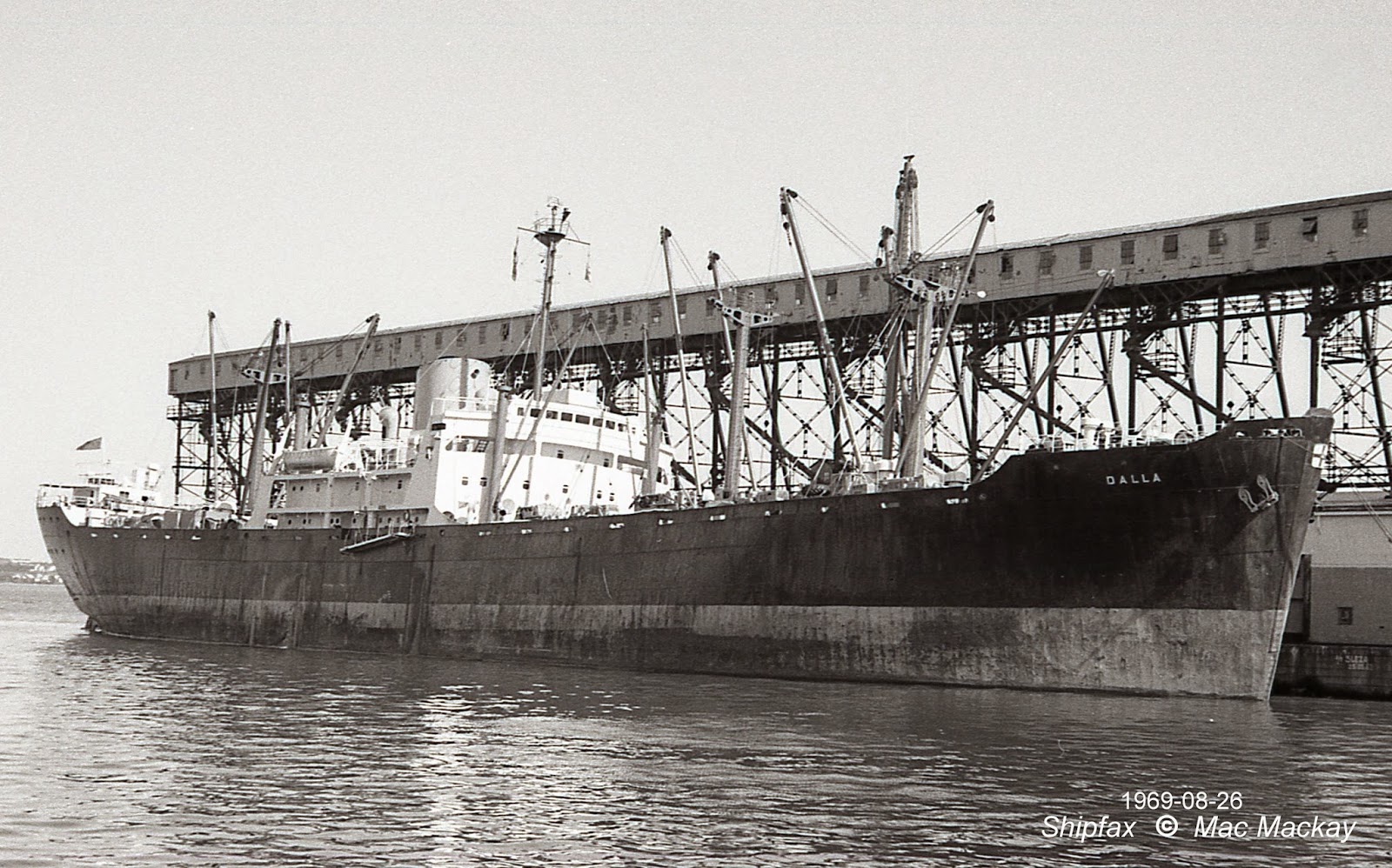 Dalla tied up at pier 26, the usual berth for ED ships. Note the grain galleries still extended to the end of pier 26 in those days, and the ED ships did load grain-but not full cargoes.

Dalla dated froim1961 when it was built by Lithgows in Port Glasgow, Scotland for the British+Burmese Steam Navigation Co (P. Henderson, managers). B+BSN had been owned by Elder Dempster since 1952 but dated back to 1934 when Patrick Henderson began as a ship owner in Glasgow, trading to New Zealand and Burma. He founded B+BSN in 1874, soon after the Suez Canal opened in 1869, trading from Glasgow and Liverpool to Burma.

In 1980 the ship was sold to Greek owners, renamed Marmaras, shifting to Cypriot owners in 1982. It was laid up at Lefkas in February 1982 and on September 1- 2, 1982 a fire gutted the engine room and accommodation. The ship was declared a total loss and was broken up by Brodospas, in Split, Yugoslavia (now Croatia) in June 1984. 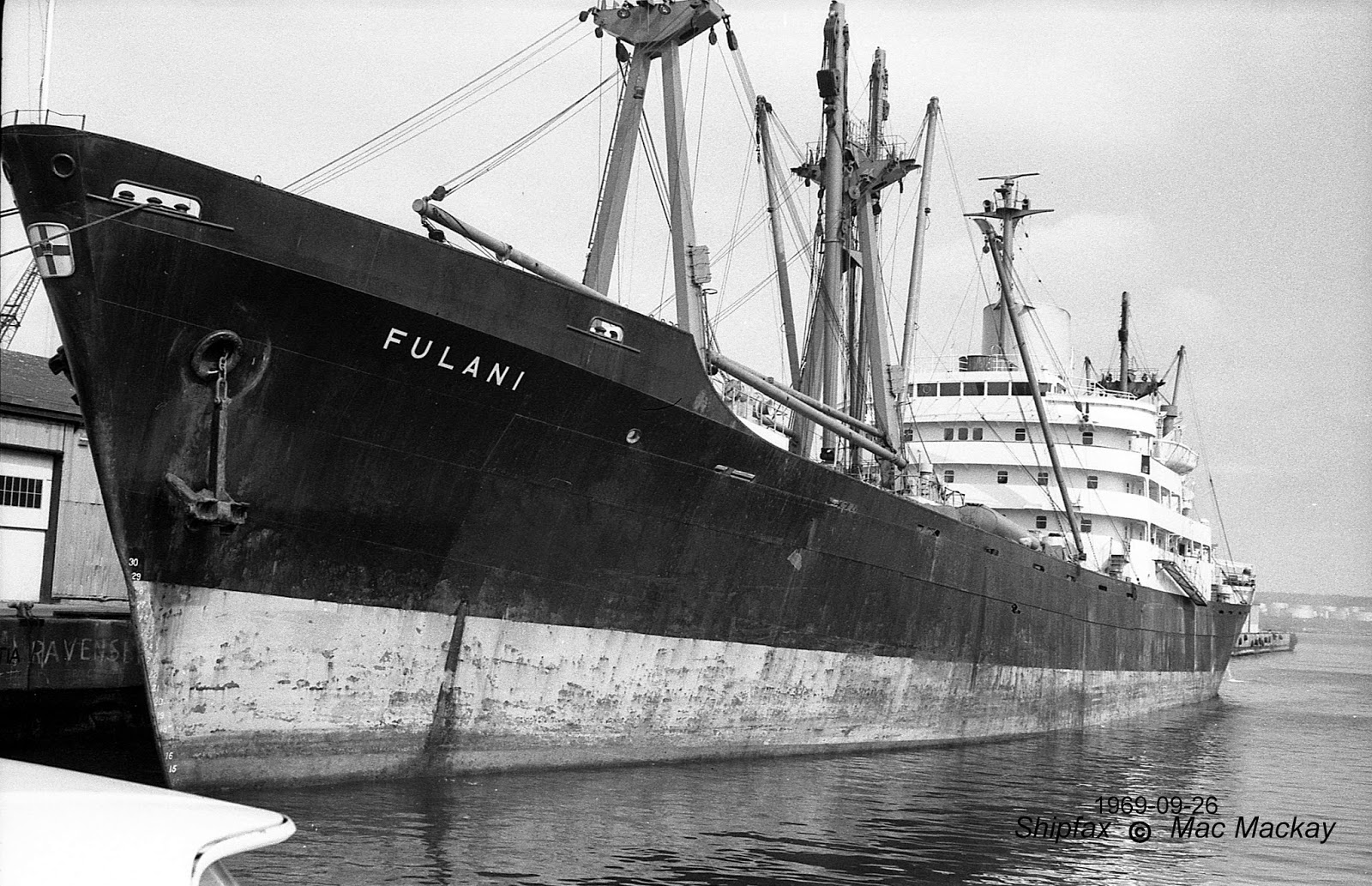 Fulani at pier 34 allowing for a close up view (in those days). Even with tug assistance, ships usually were ready to use one anchor while berthing to slow the ship if needed - sometimes called dredging the anchor.

Fulani also came from Lithgows in Port Glasgow, but in 1964. Its tonnages of 7,689 grt, 8,115 dwt are somewhat smaller than the "D" class of ships, but it appears to have more accommodation and certainly has more varied cargo handling gear. 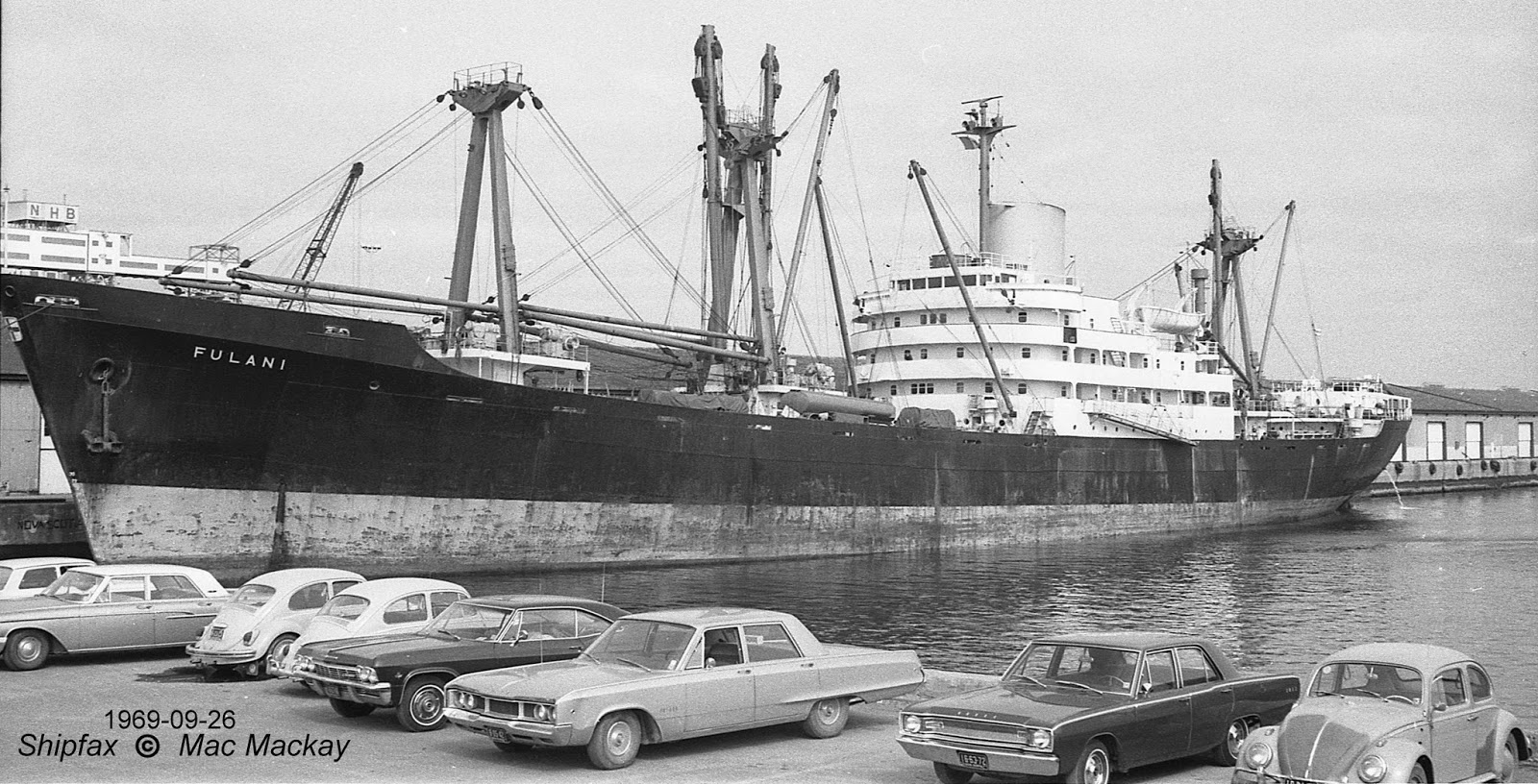 Car spotters will enjoy the variety of vehicles operated by waterfront workers in1969. I must have climbed a pile of pallets to get this elevation on the photo.
[ Another lesson learned was the limitation of fixed focal length range finder cameras. The image is not through the lens, and so doesn't always show exactly what will appear on the negative.]

Among the more modern touches were the bipod masts working one 80 ton, two 30 ton, four 15 ton, two 12.5 ton, four 7.5 ton and six 5 ton derricks. The ship could carry vegetable oil, latex and glycerine in tanks, in addition to general cargo. It still had the traditional slightly raked all buff funnel, with integral radar mast. 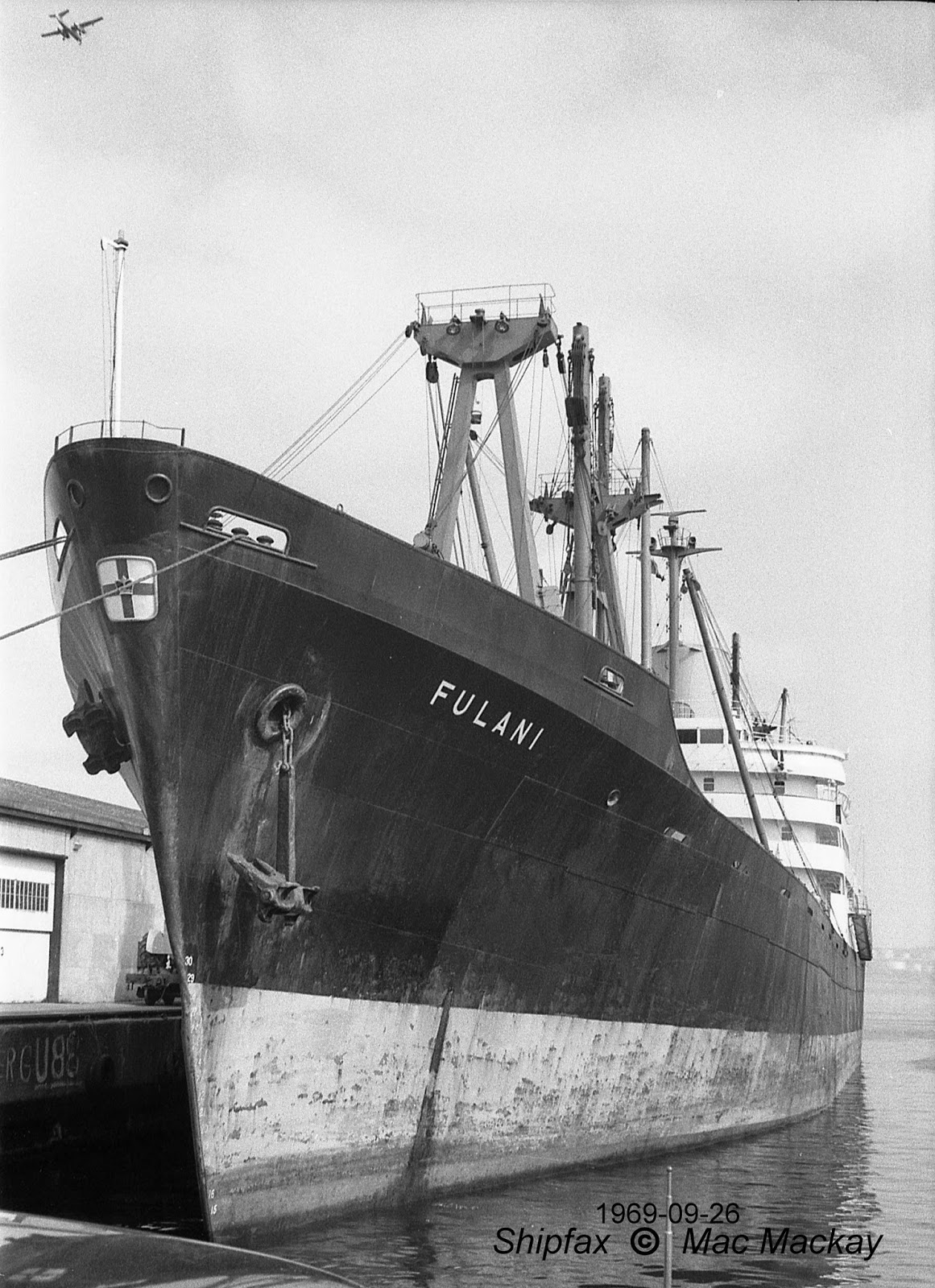 The Elder Dempster flag was used as a bow ornament. The aircraft overhead appears to be on flight path for the Shearwater naval air station.

The ship was sold to the Cameroon in 1976 and renamed CAM Azobe then in 1981 to Greek owners, becoming Cotton Trader. On July 13, 1983, while off the coast of Oman the ship suffered an explosion and fire. It was not until February 23, 1985 that it arrived in Djibouti in tow where it was declared a total loss. It was towed out later in the same month and arrived in Karachi May 5 and Gadani Beach May 13, 1985 where it was broken up. 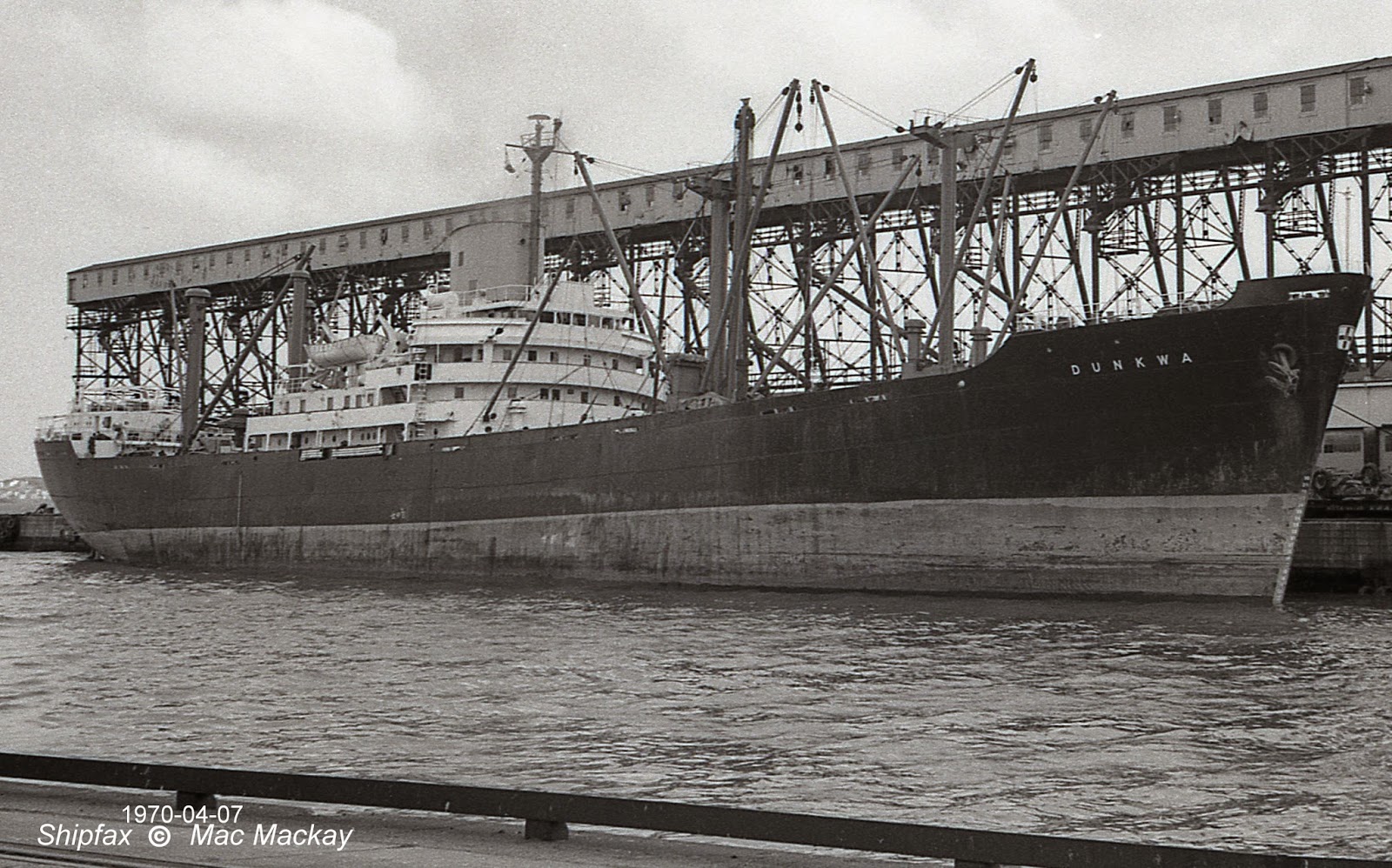 The D class ship Dunkwa was built in 1960 by Scott's Shipbuilding + Engineering Co in Greenock, and powered by a 6400 bhp 4cyl Doxford, built under license by Scott's. It also made 14 knots, and had slightly different derrick capacities of one 50 ton, two 20 ton, two 10 ton, two 7.5 ton, eight 5 ton and two 3 ton.

Built directly for Elder Demspter, it lasted until 1981 when Greek owners renamed it Clare, but it passed to Panamanian owners the same year becoming Resolve.It arrived at Gadani Beach March 20, 1985 for breaking up. 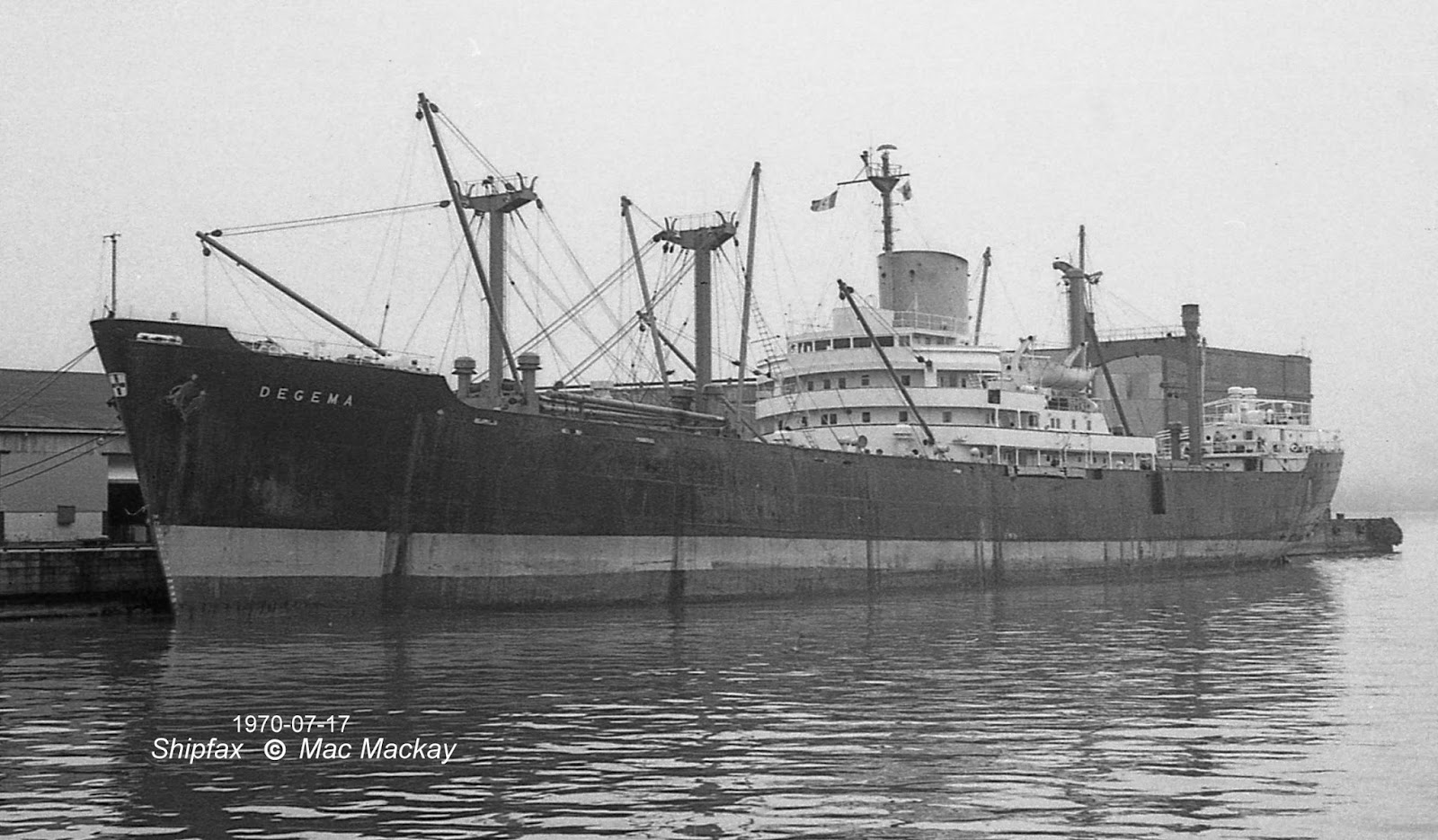 Also dating from 1960, Degema came from Wm. Gray + Co Ltd in Hartlepool, and carried a 5 cylinder Doxford of 5500 bhp, built by Central Marine Engineering Works. It carried a lighter array of cargo handling gear of two 20 ton, two 10 ton, two 7.5 ton, two 5 ton, eight  5 ton and two 3 ton derricks, and no jumbo. The after mast was a goal post type. It did have the tanks for vegetable oil, latex or glycerine.

In 1979 it went to Honduras flagged owners, and was renamed Veejumbo, but they changed it back to Degema in 1982. On December 21 of the same year it sailed from Port Sudan, and arrived at Gadani Beach January 30 for scrapping. 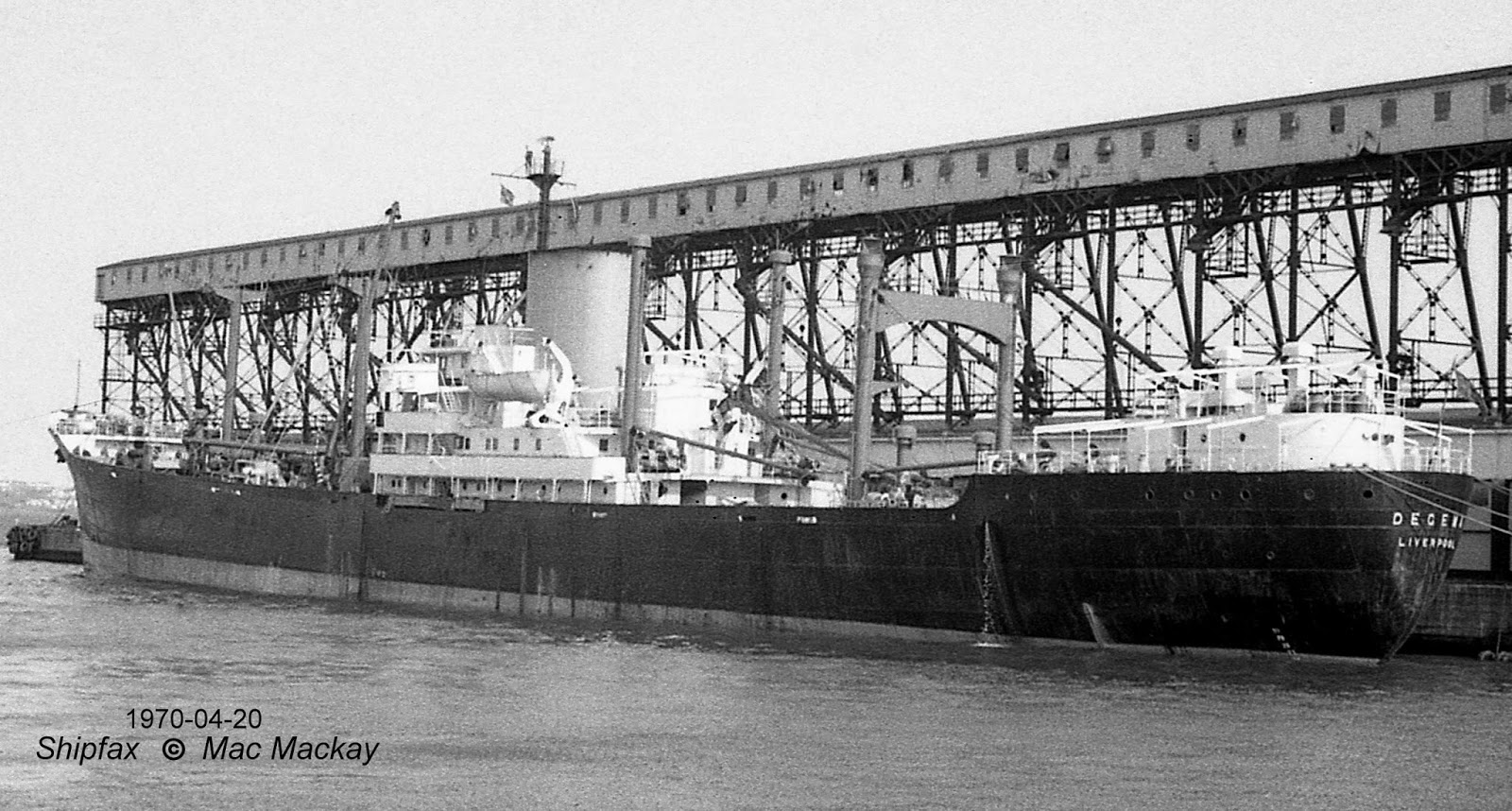 On another visit the ship tied up stern in at pier 26, allowing for a good view of the funnel and the goal post mast. There was more accommodation for crew aft,

Although I am not aware that the ship ever called in Halifax under its Elder Dempster name of Onitsha, the ship did put in a notable appearance later.

It was sold in 1972 to Cisne Cia Nav SA and renamed Amvourgon under the Greek flag.
On January 8, 1975 when on a voyage from Quebec to Baltimore, it caught fire off Rivère-aux-Renards, QC. Unable to contain the fire, the crew of 30 were taken off by a nearby Russian ship and then by Canadian Forces helicopter.

The fire burned itself out, but not before gutting the accommodation. The tugs Point Valiant and Point Victor, that had been working in Belledune, NB, took the ship in tow arriving Halifax January 11. [That seems like very quick work, so the date of the fire breaking out may be incorrect, though it is cited by most sources. The arrival date in Halifax is correct.] 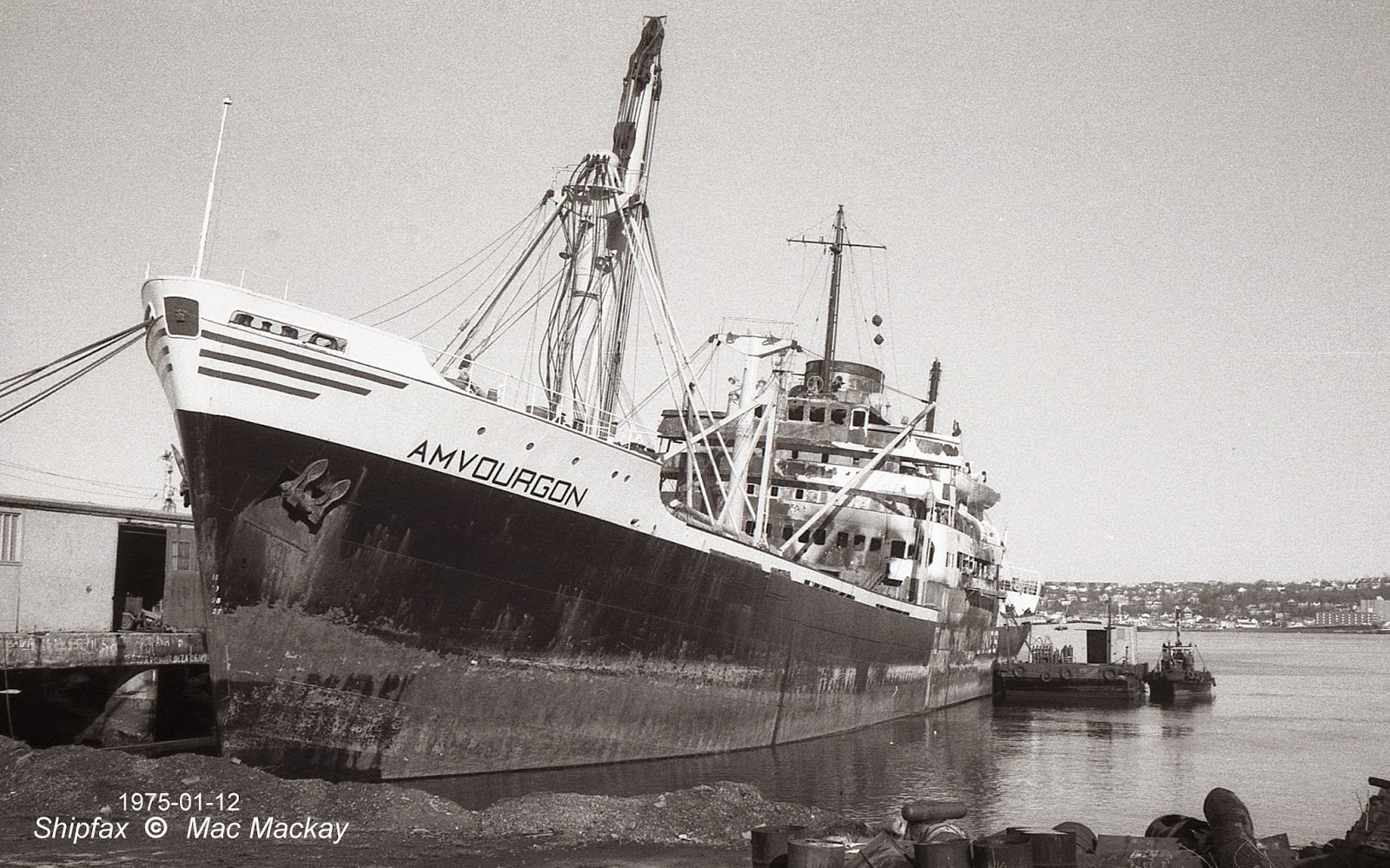 Amvourgon ex Onitsha, at Purdy's wharf where it was patched up sufficiently to be towed to Europe for scrap.

It was berthed at the south side of Purdy's wharf where it was declared a total loss. Some work was done to right the ship to an even keel and make it sewaorthy enough for a tow. The German tug Dolphin X (the former Canadian navy tug St.John) towed it out May 7, 1975 and it arrived in Santander, Spain May 29 where it was broken up. 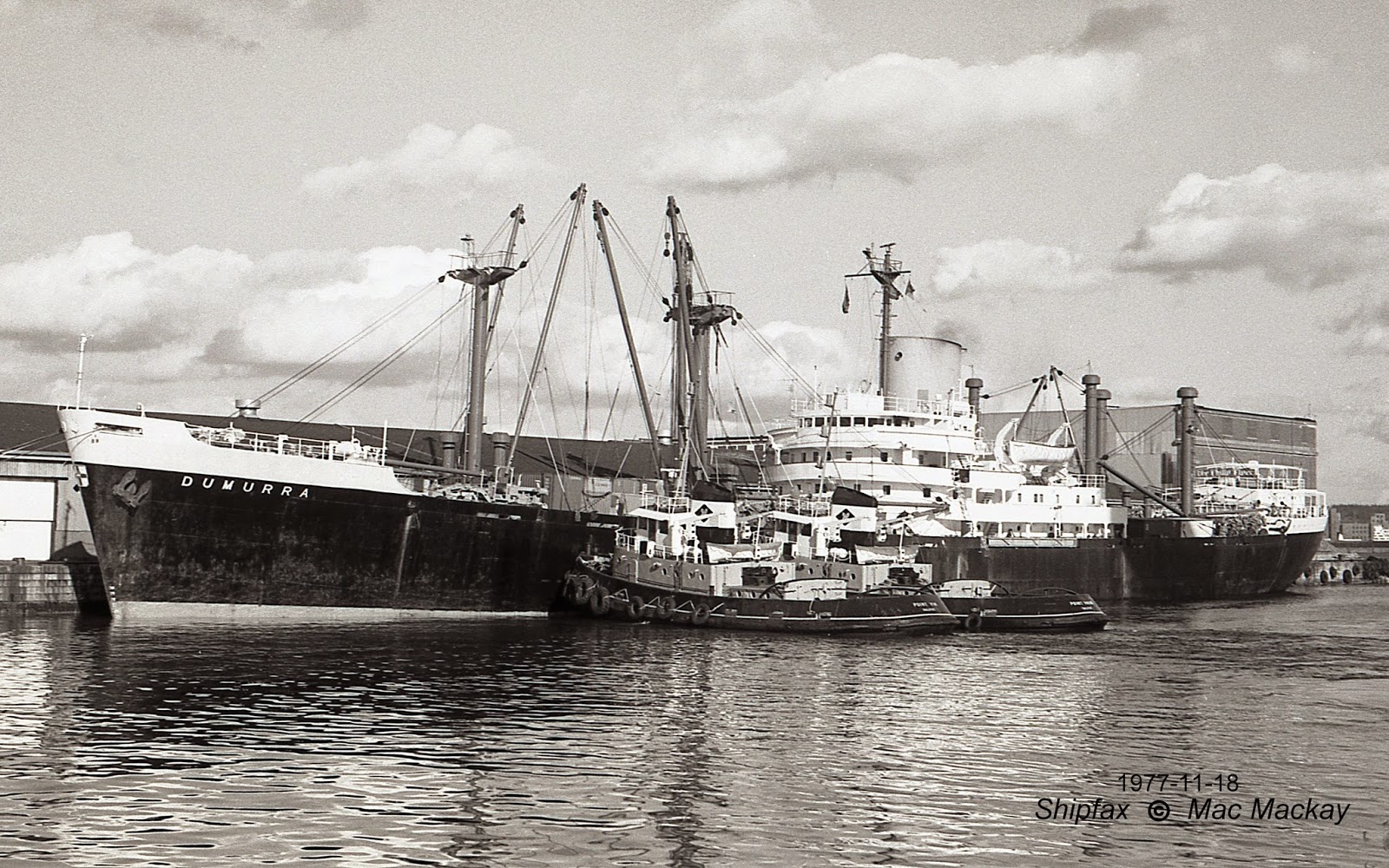 Tugs Point Vim and Point Viking push up on Dumurra as prepares to leave pier 23. 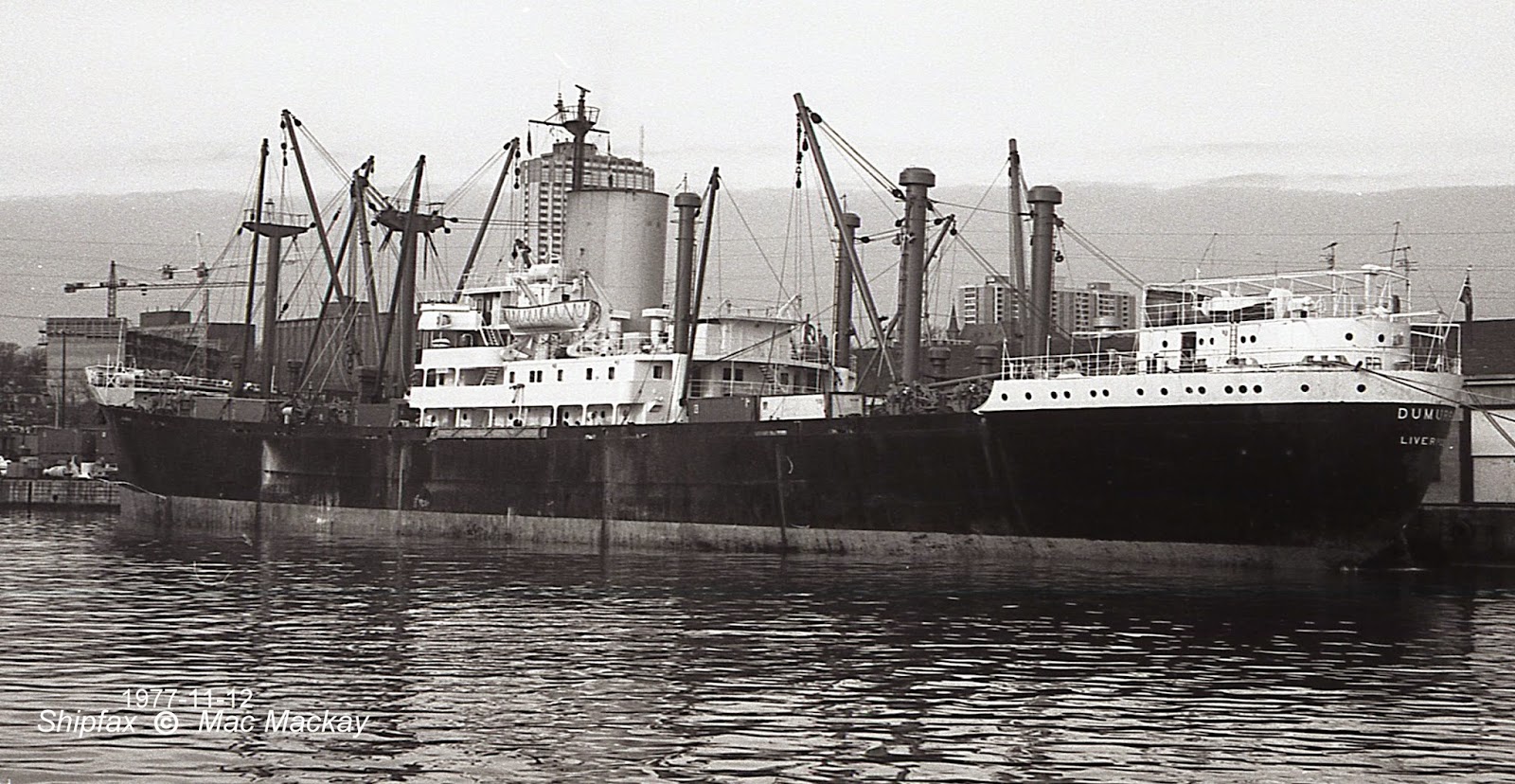 Seen from astern, at the same pier, this ship, unlike the previous ones, has its forecastle and after castle painted white. It also has kingpost masts aft.

The ship served Elder Dempster until 1980 when Isle of Man owners called Fumurra Ltd, renamed the ship Fumurra. It arrived in Gadani Beach May 2, 1983 where it was broken up. 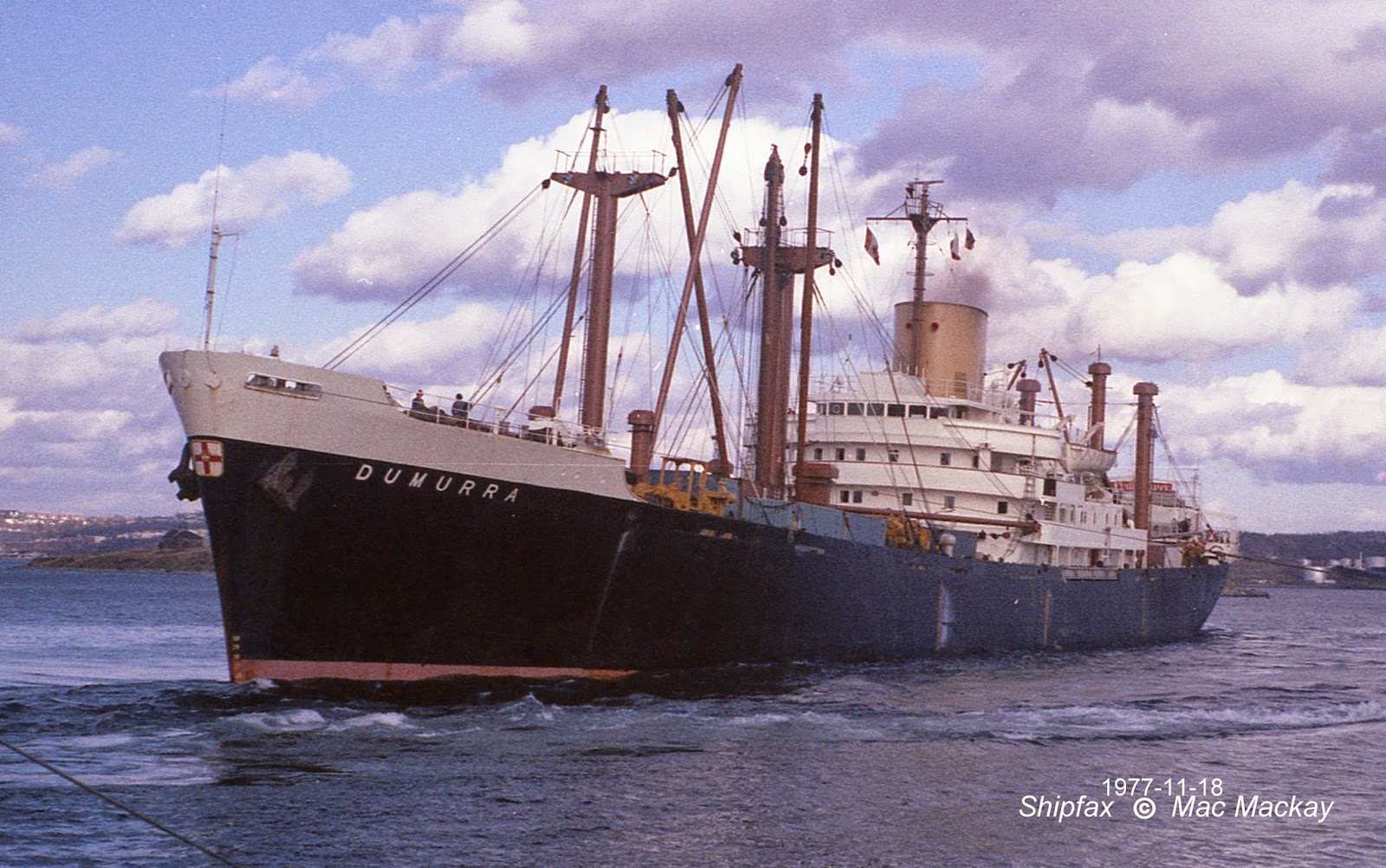 Getting away from pier 23, the ship leans a bit under the control of tugs. It has machinery cargo on deck, and appears well loaded..

Underway for sea, the tugs are ready to cast off.

General cargo ships, including those of Elder Dempster disappeared from the seaways as the container age developed. British shipowning and British shipbuilder also virtually disappeared too, thus changing the character and number of ships calling in Halifax.