The prestigious Port Line, founded in 1914 as the Commonwealth and Dominion Line, took its name in 1936 when it was acquired by Cunard Steamship Co. They participated with ships of the New Zealand Shipping Company and Federal Line in the Montreal Australia and New Zealand service called the MANZ Line, and served the St.Lawrence River (Halifax in winter) and among their was Port Halifax.
The ships carried a grey hull, white superstructure and Cunard red funnel. The funnel had two black stripes instead of Cunard's three.

Another Port Line service was UK direct to Australia and New Zealand. Much of the returning cargo was refrigerated, and thus speed was thought to be essential. Huge carrying capacity was also required since there was also a variety of other cargoes carried such as oils (edible and otherwise) machinery and all sorts of general freight. For example the ships could carry 66,280 cu ft of chilled, 606,940 cu ft frozen, 236,000 cu ft general, 460 tons liquid, and (omen of the future) 71 TEU.

Just at the dawn of the container age Port Line ordered the construction of what proved to be the largest reefer ships in the world. Both were delivered in 1968 and regrettably nothing better typifies the state of British shipping of the day. Port Chalmers was the first of the pair and it was built by Alexander Stephen + Sons of Linthouse, Scotland. With hull number 700 from that yard, it was also the last ship built by the independent company. It was then consolidated, after 200 years of existence with other Scottish builders, into Upper Clyde Shipbuilding, which delivered Port Caroline, from the same slipway, but with hull number 1.   (The further consolidation, nationalization and virtual demise of most Scottish shipbuilding is one of the sadder tales of the 20th century shipping. The resultant ill will still resonates today as one of grievances that lead to the Scottish independence movement.) 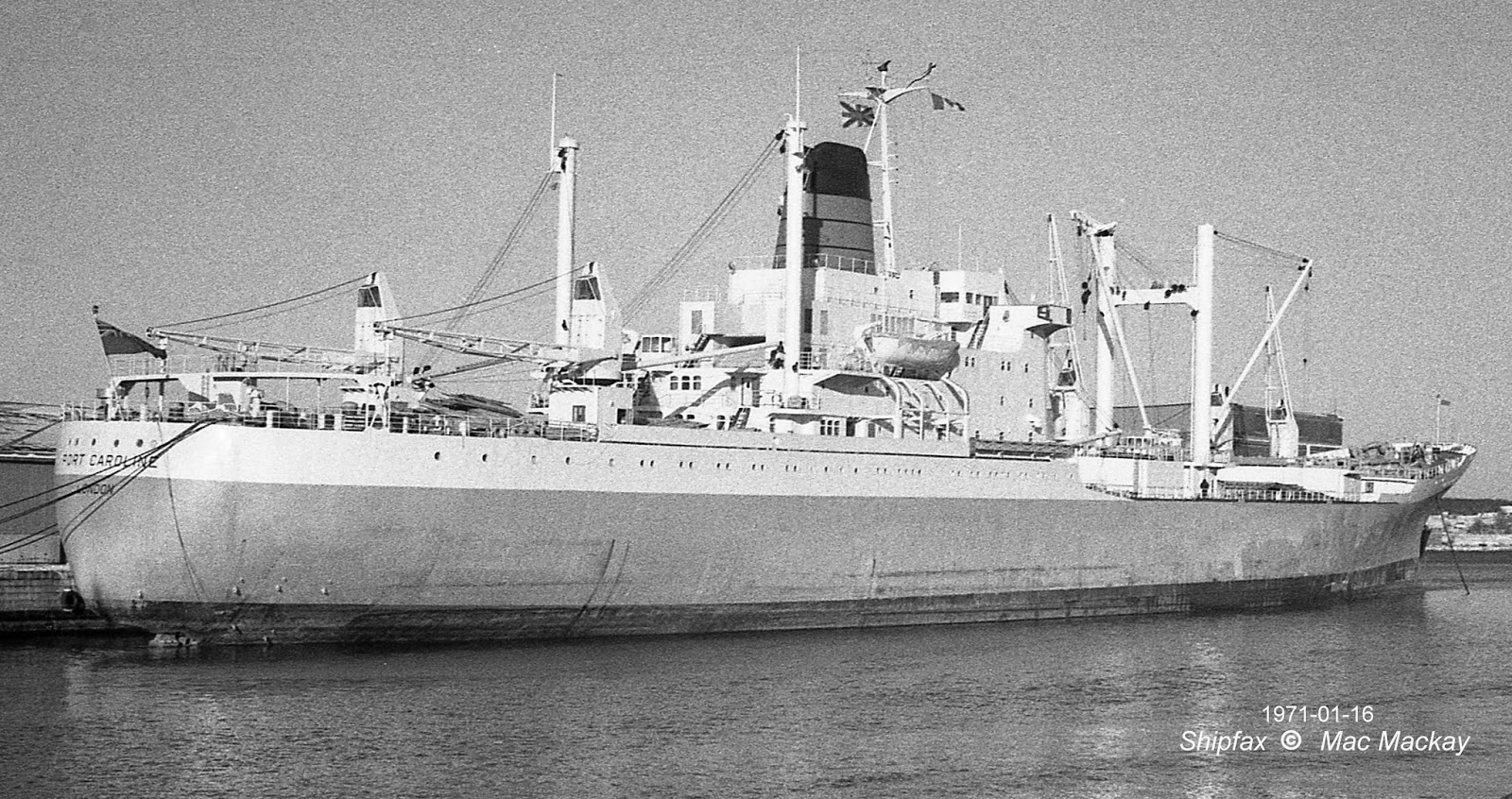 They were fitted with an array of cargo handling gear including three traveling and two fixed 5 tonne cranes, four 10 ton and two 15 ton derricks and one 25 ton derrick.

There was accommodation for 12 passengers and larger than normal officers quarters to allow wives to accompany husbands. The size of crew, including stewards, and passengers is not known to me, but the ship carried two 98 person lifeboats.

Overcome and bypassed by the container age, they were laid up in 1979 for five months then chartered out by various Cunard subsidiaries to other operators. Both were sold to Greek owners in 1983 but again laid up and broken up in China in 1985. At only 17 years of age, they were a great waste. They also proved to be the last ships ordered by the Port Line and the last ships of the Brocklebank Line. 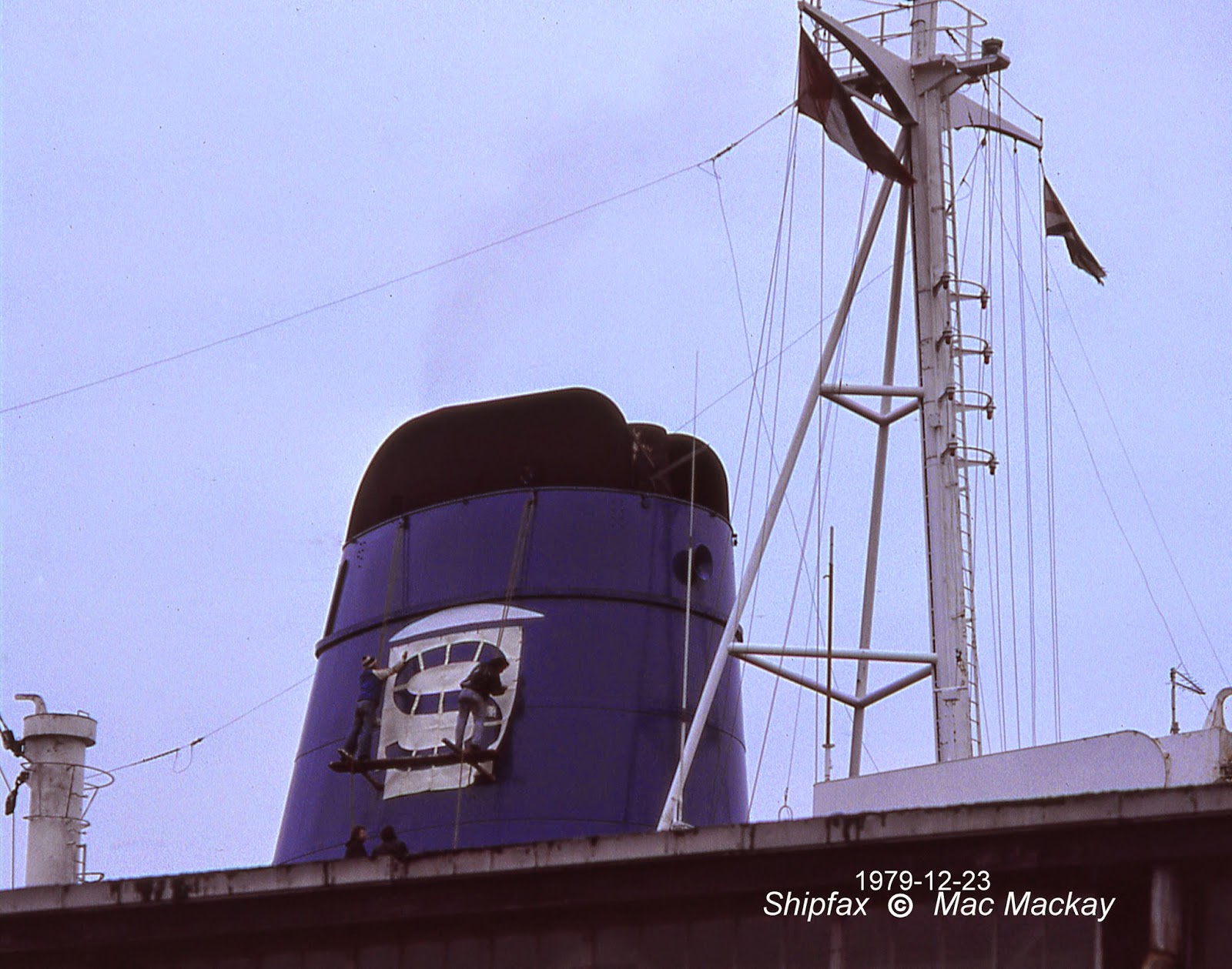 The Port Line colours disappear for as the ship takes up a charter with the Swedish Salén Rederierna.**

Port Caroline was assigned to management of the Cunard owned Thos + Jno Brocklebank* in 1981 and renamed Matra . However Cunard-Brocklebank died a slow death and the ship was the last of two Brocklebank ships when sold in 1983. It became the Greek Golden Dolphin for Kappa Maritime of London but was laid up in the Arabian Gulf. It sailed from Fujairah anchorage January 31, 1985 for Shanghai.

Port Chalmers was transferred to Cunard Shipping Services for management and renamed Manaar as a Brocklebank ship in 1981. It was the other last Brocklebank ship and the company name disappeared  when it was sold in 1983. Renamed Golden Glory by London Greek owners Kappa Maritime it was also laid up in the Arabian Gulf. It arrived in Shanghai June 13, 1985. 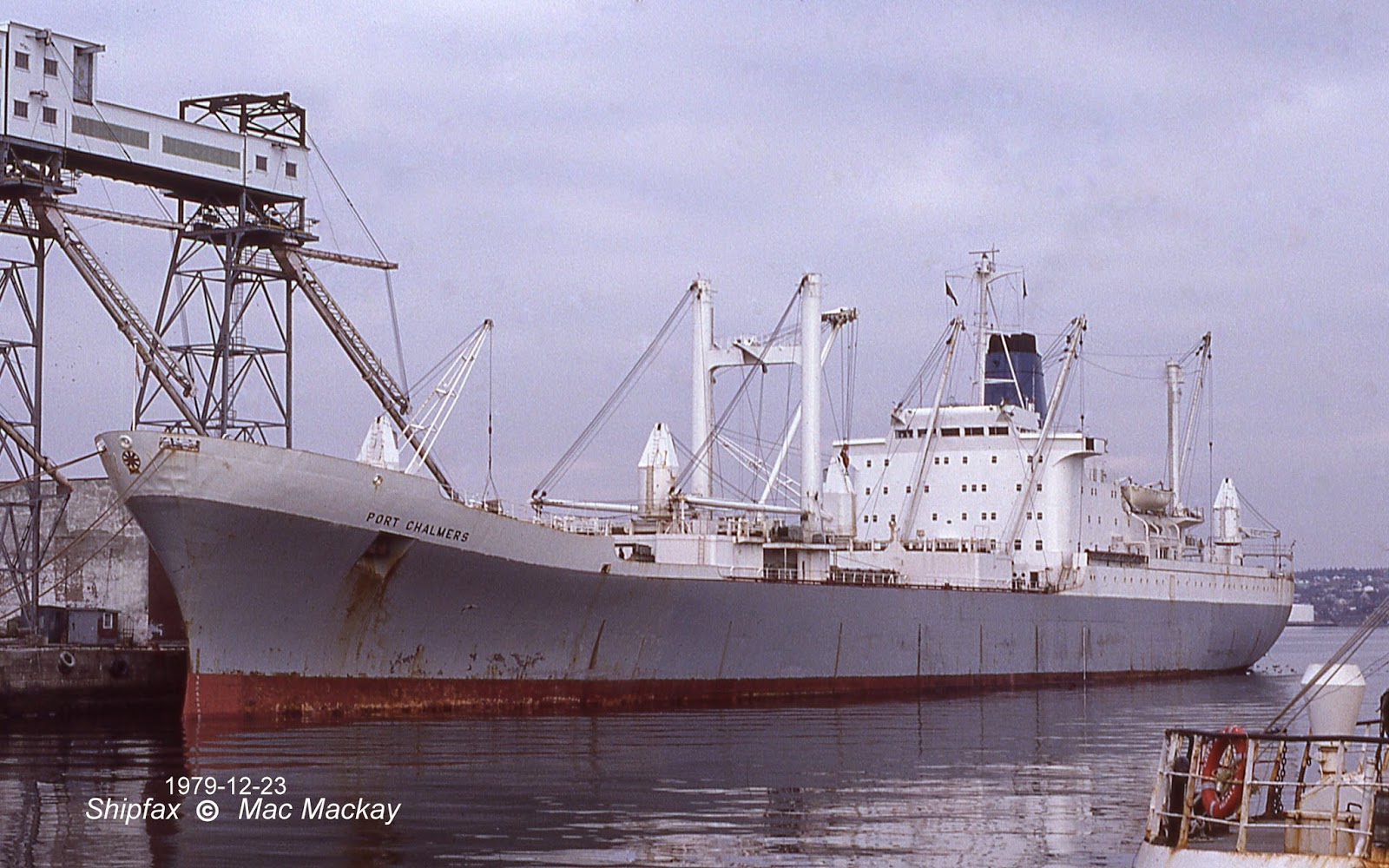 Arriving in Halifax from a five month layup Port Chalmers looks decidedly shabby. Even so it remained a magnificent ship fallen on hard times.

The uncharitable would say that these great ships were white elephants- the last of a great race, but doomed to extinction.

* Thos. + Jno. Brocklebank was also a venerable British concern, dating back to 1801 and trading to India. It was owned by Cunard after 1911. Cunard-Brocklebank was formed in 1968 and the ships of the two lines were pooled but the writing was on the wall as containerization took over the India and Pakistan trade.

** Ironically Salén, the world's largest reefer company became overextended in the early 1980s and was declared bankrupt in 1984. Swedish shipbuilding also collapsed in the 1980s, after being in third or fourth place behind Britain alternating with Germany in terms of tonnage built in the 1960s and 1970s. Japan on the other hand was so far off in first place that it eclipsed the next ten or more countries together.