Another in the odd assortment of ships on the G6 service arrived in Halifax this evening. This time it is Northern Delegation, a Liberian flagged ship owned by Norddeutsche Rederei Schulte of Hamburg.

As the ship rounded Seaview Point in Bedford Basin the sun broke through the haze and cloud. Escort tug Atlantic Oak stood by while the ship turned. 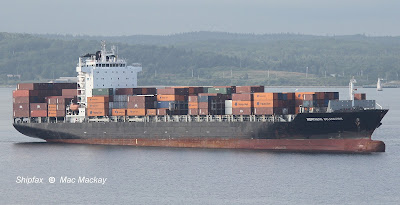 Viewed from the heights of Fairview, the ship got the full benefit of the few mintes of sun we were allotted today.