Tanker He Chi - needs a revision

A rare Chinese flag tanker put in today. A handysize tanker, He Chi is en route from New York to Montreal, and anchored for Asian gypsy moth inspection and to take bunkers. 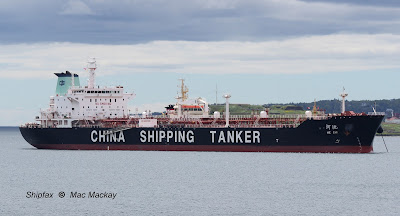 He Chi still carries the funnel markings of the China Shipping Group.


Predictably it was built in China too, at Guangzhou International shipyard in 2013. Although measuring 30,235 grt and 48,698 dwt, typical for a handysize chemical and oil product tanker, it is classed as a crude oil tanker by many sources. However it does have seven discharge manifold connections, which would certainly indicate the ability to carry several products at a time. [The manifolds are marked by white circles, just above the word "shipping".]

The ship's operators are proclaimed as China Shipping Tanker (a subsidiary of China Shipping Development Company of Shanghai, a state owned company) however that is now history.

Following the December 2015 forced Merger of China Ocean Shipping Corp (COSCO) and China Shipping group (CS), the state formed a new company to operate the combined fleet of tankers. Now with a fleet of 105 tankers and 25 LNG carriers, the new company was unveiled last week as "China COSCO Shipping Energy Transportation Company". Despite that rather cumbersome name, it is expected to do very well due to high tanker demand. (The bulk carrier and container segments of the two corporations, which were also merged are struggling, to say the least.)

We can therefore expect that He Chi will soon get a new banner on its flanks (Will the ship have to be lengthened to carry it?) and possibly a new funnel mark too.