The National Energy Board of Canada dropped a virtual bombshell September 22 when it ordered an immediate 10% reduction in operating pressure on Trans-Northern Pipeline's Ontario-Quebec line due to numerous over-pressure incidents and other management concerns. The line delivers product from refineries in Nanticoke, Oakville and Clarkson to Toronto, Ottawa and Montreal, and branches to Pearson International and Pierre Eliot Trudeau International airports.

According to producers, the reduction threatens fuel availability in the Greater Toronto area, and they are scrambling to find tankers to maintain supply.

With no Canadian tankers available to take on the extra work, they have turned to foreign ships available on the spot market. The tankers have to be small enough to use the St.Lawrence Seaway and thus are limited in capacity. (A coasting license may be granted to operate a foreign ship between Canadian ports by the Minister of Public Safety and Emergency Preparedness (upon recommendation of the Canadian Transportation Agency) if no suitable Canadian flag tanker is available.)

Suncor wants to bring in the Duzgit Endeavour, a Turkish owned and flagged vessel of 10,276 grt, 15,995 dwt. It is to make four voyages between Montreal, Oakville and Sarnia carrying 10,000 m3 per trip. 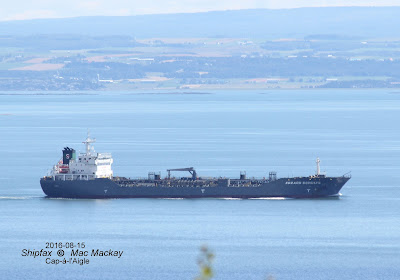 Edzard Schulte on the St.Lawrence in August.

Algoma (working for Esso) has applied for Edzard Schulte, German owned, Isle of Man flag, 11,246 grt, 16,371 dwt to carry 70,000 bbl per trip for multiple trips out of Sarnia ranging between Thunder Bay and Montreal.

Meanwhile Pétro-Nav, which works for Valéro (Ultramar) is not effected by the NEB order, but it has also applied to use Harbour Pioneer, German owned, Portuguese Madeira flag, 13,239 grt, 19,122 dwt to make multiple voyages October 5 to November 3 carrying 10,000m3 to 14,000m3 out of Lévis to ports ranging from Thunder Bay to Corner Brook. 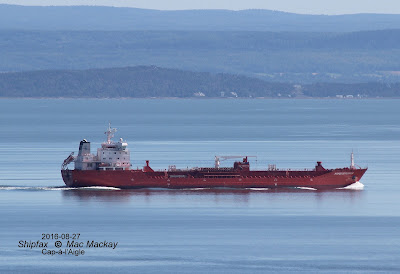 Harbour Pioneer also on the St.Lawrence in August.

This is the fourth foreign flag tanker that Pétro-Nav has chartered in this year. Their own fleet has been fully occupied on the St.Lawrence and in the far north.

This periodic shortage of Canadian tankers has been an issue for years, but apparently is not enough for Canadian tanker owners to increase their fleets. There never seems to be a problem finding foreign tankers when needed. Their low cost crews and rates are no doubt beneficial compared to Canadian flagged and crewed ships.