Several events were worthy of note in Halifax harbour this week (although I missed some of them).

The Irving Oil terminal in Woodside was recommissioned this week with the arrival of Acadian. The pier and all the lines running over and undergound to tanks high on the hill behind the terminal have been rebuilt in the past two years. 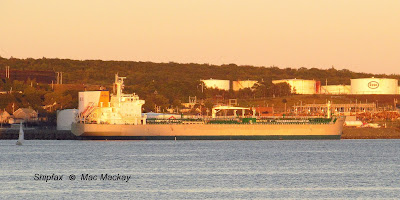 Acadian at the Woodside terminal on September 21.

Irving had shared pier facilities with next door neighbour Imperial Oil for several years, but when Imperial ceased refining at that location and began importing all product, their two piers became too congested for Irving's liking. Irving thus rebuilt their old terminal for their own use. A pipeline connecting Esso to Irving's tanks was probably also removed.

HMCS St.John's was elevated on the HMC Dockyard synchrolift for some needed maintenance. 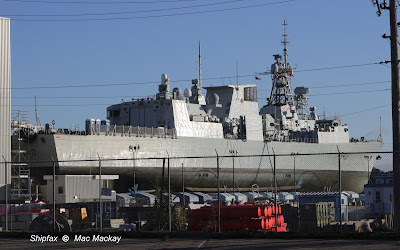 This is the first ship, other than a submarine, to be lifted in a long time.

Speaking of maintenance, Atlantic Container Line's new G4 LoRos are experiencing teething problems. Atlantic Sail has been anchored in Bedford Basin since Thursday September 22 with undisclosed mechanical problems. It has been restricted from sailing by Transport Canada until it has a clean bill of health. 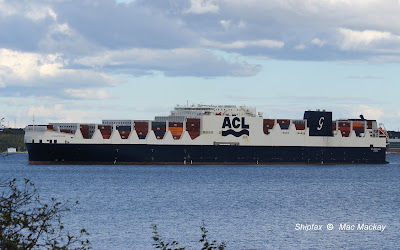 For a time there was a tug alongside, indicating that its main propulsion engines were out of commission. This is the second delayed ACL recently, with G3 Atlantic Cartier hung up in port for several days awaiting parts earlier this month.

The cruise ship Arcadia was only one of 18 cruise ship visits in the last seven days as the season is in full swing. 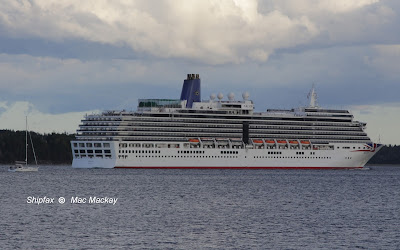 Built in 2004 by Fincantieri, Porto Maghera, the ship was originally ordered by Holland America as a Vista class ship, but was transferred to Cunard, to be named Queen Victoria. However shortly before launch, parent company Carnival transferred it to P+O and it became Arcadia. The 84,342 grt ship has a capacity of 1952 regular passengers, but can carry 2388 maximum (the latter figure is used by the Port of Halifax, but I doubt she was carrying that many.)
The ship has been refitted twice, losing the traditional P&O buff colour on its funnel in the process and getting an exploded version of the union flag on her bow. The unfortunate implications of a such a design are too obvious to comment on here. 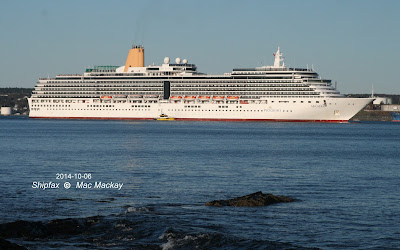 In 2014 the ship still had its traditional P+O funnel colour, even though the funnel was a Cunard style, less the cowl. 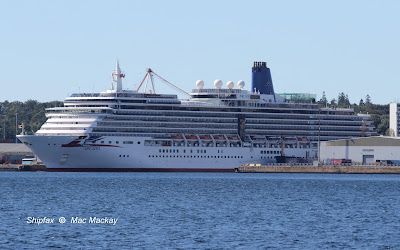 Despite the blue funnel, the ship has kept its attractive red boot topping.

The ship stood out at pier 31, with about 15m of its bow projecting out into the stream. 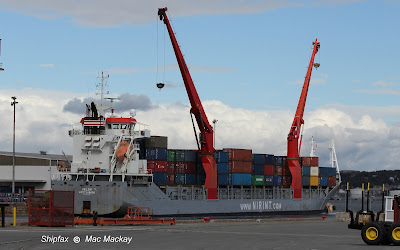 Today's arrival for Hapag-Lloyd, Ningbo Express, was not deeply loaded, but had an ample quantity of containers aft of the superstructure. Many of these are likely to be empties, heading back to the far east. The 7506 TEU ship, built as Hong Kong Express in 2002 by Hyundai, Ulsan measures 88,493 grt and 100,016 dwt. It received its current name in 2012. 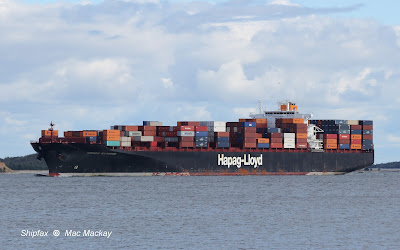 It was met by the tugs Atlantic Larch (filling in for Atlantic Willow which is getting some maintenance) and Atlantic Oak for its trip in to Fairview Cove. 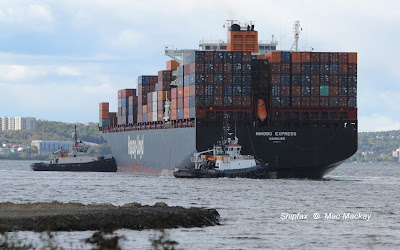 The tugs turn the ship off Fairview Cove, where filing continues, presumably to enabel eventaul expension of the pier. Even though doubts have been expressed about the ability of Fairview Cove to continue serving large ships, Shipfax believes it will continue to serve ships up to and beyond the size of Ningbo Express.
.
Posted by Mac at 9:34 PM