A sub and more cars

The absence of a submarine in Halifax harbour for many months was broken for a short spell yesterday and today as HNLMS Zeeleeuw [Sea Lion] put in for a brief visit. One of four Walrus class subs of the Dutch navy it has been in commission since 1990. 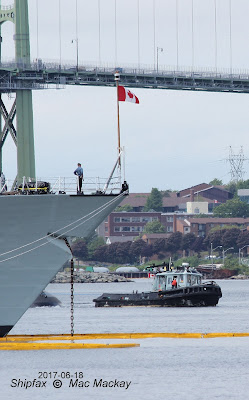 An RCN sailor stands by to pipe a salute as the pup tug Granville turns the sub off the pier.
The civilian tug Atlantic Willow did the work of "lifting" the sub away from the jetty. 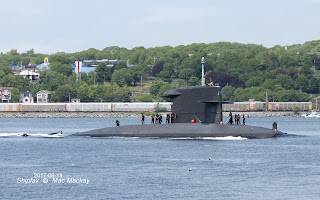 The Dutch diesel electric subs have been instrumental in numerous intelligence gathering operations and have been deployed in anti-piracy operations.


Our own local submarine HMCS Windsor (all the others are on the west coast) has been invisible for many months. However it was announced last week that the RCN will keep the subs for another decade or more, which will mean many billions in refits to extend their life expectancy from 2020 to the 2030s. New subs will then not be needed until the frigate program is complete.

A much more common sight in Halifax is car boats - love' em or hate' em they are a fact of life, and their daily (or more frequent) arrivals and departures create lots of work for pilots, tug crews and longshoremen. 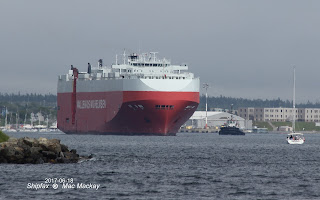 Talia arrived this morning and sailed late afternoon. A  57,692 grt, 21.021 dwt ship, built in 2006 by Gdynia Shipyard in Poland, the ship is owned by Ray Car Carriers and is on long term charter to Wilhelmsen Lines. Although auto carriers look alike, there are subtle differences in appearance and size. 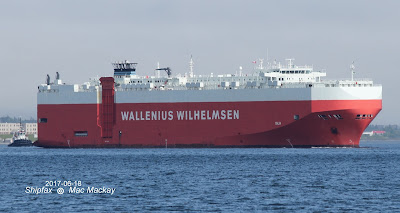 From nearly broadside, the ship's immense size becomes apparent - it has a capacity in excess of 6,500 cars. The tug Spitfire III follows the ship outbound for its next assignment (see below)

As Talia left, the next Autoport customer was arriving. Viking Queen is a new name for ship that has been in service for nearly ten years. Built as Hoegh Delhi by Uljanik Shipyard in Pula, Croatia, the 55, 775 grt, 16,890- dwt ship was renamed earlier this year, reflecting an ownership change that took place in 2014. Current owners are listed as Gram Car Carriers Holdings, but the original owners were Viking Car Carriers, so this might have been an internal transfer rather than an actual sale. Nevertheless it is unusual for car carriers to change names. 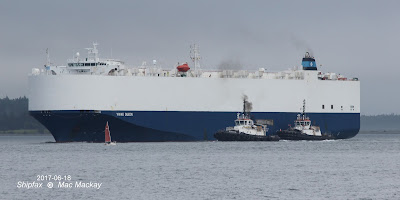 Viking Queen has a slightly more conventional appearance, and somewhat smaller tonnage, but can still carry 7,000 cars.Tug Spitfire III has made up aft and Atlantic Oak moves in forward, to assist the ship to Autoport.