A ship that has spent most of the time since November 4, 2017 in Halifax finally sailed today. The Thorco Logos first arrived at Pier 9C where it was fitted with cable racks (also known as tanks). It took until about November 12 to install the partially prefabricated structure in its hold and the ship then went to anchor in Bedford Basin. (see Shipfax 2017-11-05 ) 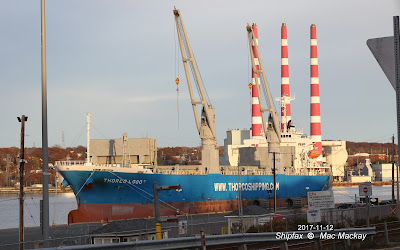 On December 12 it returned to Pier 9C for stores but was back at anchor on the 14th. It remained there until January 3 when it went to sea before the "weather bomb" storm. As a light ship, it was unwise to remain at anchor in the Basin during very high winds.  It was due to return to port January 7, but this was put off until January 9 when it  came in to Pier 9C. Welders were back at work in the ship's hold, suggesting that there was some damage to the cable tanks from being tossed around in the storm. On completion of the repairs it returned to anchor in the Basin on January 13. 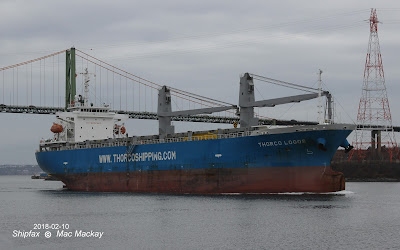 The ship got underway this afternoon, giving Portsmouth, NH as its destination. Newington, NH, just upriver from Portsmouth, is the home of Tyco Electronics Integrated Cable Systems LLC, manufacturers of fibreoptic cable. Ships often fit out in Halifax to carry the cable, and usually wait here until the cable is ready to load. Few linger here as long as Thorco Logos.
Once the ship loads the cable, it may return to Halifax to await the cable laying project to get underway. One cable project planned for this summer is 150 lm of fibreoptic to interconnect the French Islands of Grand Miquelon and St-Pierre and link to the Burin Peninsula of Newfoundland at Lamaline and Fortune. Alcatal Submarine Networks has applied for Canadian coasting licenses to use the French cable ship Ile De Sein for the work, starting in May. About 30% of the work will be in Canadian waters.