Augusta Luna - in the news, twice

Most ships lead uneventful lives, seldom appearing in the news or attracting much attention to their activities. That has certainly been the case with Nirint Shipping's Augusta Luna, a regular caller in Halifax. It plies its normal route from Europe to the Caribbean and back via Halifax with nickel sulfides from Cuba. The cargo, which is very tricky to handle in bulk, (it tends to behave like a liquid) is therefore shipped in large bags which prevents liquification and means that it can be handled as break bulk cargo. 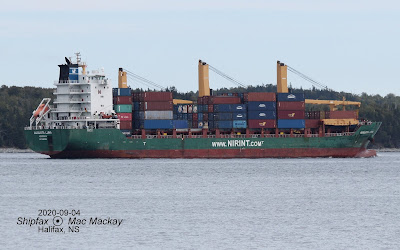 To assist in loading heavy cargo the ship carries a pair of large spreaders, stowed starboard side forward at number one hatch (painted the same colour as the cranes.) Those cranes were put to good use "recently" when the ship loaded "a number" of Russian built railway locomotives for Cuba. The press release about the move was rather coy about details, but did state that the engines weighted 86,000 kg each - fairly light work for this ship. Even at a 31 meter outreach the larger cranes have an 80 tonne maximum capacity. 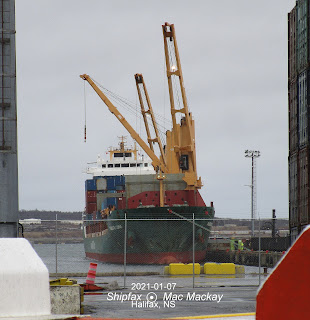 The other newsworthy recent event occurred on December 25 in Mariel, Cuba, when the ship allided* with the tug Capricornio I, causing a 50cm dent in the hull in the way of the starboard number 1 ballast tank. No dent was obvious today while seen through a couple of layers of fence. The press item also stated that the dent was 7.4 meters above the waterline. Even at light draft that would seem to me to be very high on the hull for a ballast tank.

(* The term allision, which I like, means coming into contact with a stationary object, as opposed to a collision when two moving objects come into contact.)

After completing its cargo work tomorrow, the ship will be returning to Rotterdam to start its cycle again. It is due next in Halifax February 18.