New for Melfi, the Imedghassen

Melfi Lines, the trading name for the Melfi Marine Corp is a long time user of the port of Halifax. Its regular trade from Europe to Cuba, and onward connections to Caribbean and South American ports, now consists of a twelve day rotation with five days transit from the PSA Halifax terminal to the home port of Mariel. Over the years, the company has used a variety of chartered vessels, some short term and others quite long term. Today's arrival, on its first trip for Melfi Lines, is fairly typical of the ships the line uses, which is to say, multi-purpose, fitted to carry containers, and generals, and equipped with cranes for cargo handling. 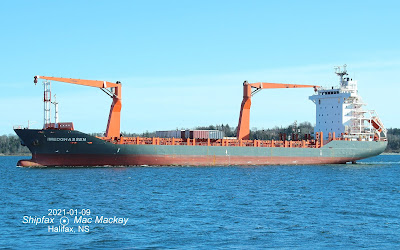 The smart looking ship was built in 2012 by Daesun Shipbuilding + Engineering Co, Pusan as Majority and has carried the names 2013: Dignity C, 2017: Sofrana Surville, 2019: Majority and taking up its present name in 2019. It measures 9998 gt, 12,754 dwt with a capacity of 1048 TEU and carrying two 40 tonne cranes.
The ship is owned and operated by Global Maritime Algerie SpA, and flies the Algerian flag. Its name also refers to a temple-mausolueum dating perhaps to 200 BC and considered to be one of the country's major heritage sites.
The ship arrived with some sort of technical deficiency and was escorted from the pilot station by the tug Spitfire III. It then tied up at pier 34, a berth usually used for repairs or layups. Its scheduled departure date was January 8, but that has now been extended.