Canada's only commercial icebreaker, Polar Prince, arrived this afternoon (with a bit of a list to port) - for the first time with this name.
Built in 1959 as the Canadian Coast Guard ship Sir Humphrey Gilbert, she was assigned to Newfoundland, but frequently had her refits in Shelburne, Nova Scotia. In 1985-86, Halifax Shipyard carried out a major refit, in which she received a new icebreaking bow section and lifting gear.
She was retired in 2001 and given the name 2001-06 until sold. She became Gilbert I and in July 2002 became Polar Prince. Another major refit was carried out in 2009.
She still carries her four original Fairbanks Morse engines, rated at 5,120 bhp each. They drive four generators which in turn power two electric motors developing 2,125 shaft horsepower each.
Current owners are listed as GX Technolgy Canada Ltd of Calgary. This company is a division of ION GX Technology a major world player in the seismic field. In fact GX has a major project in the Beaufort Sea starting July 1 and running until November. 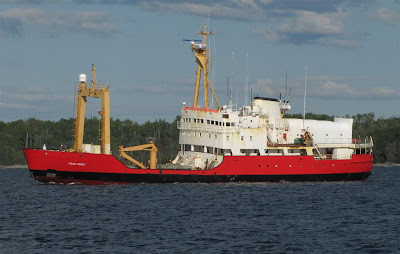 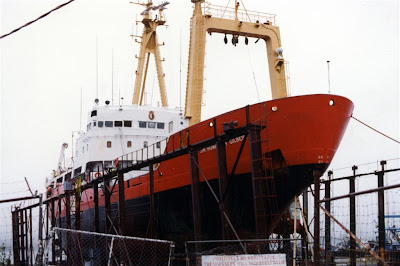 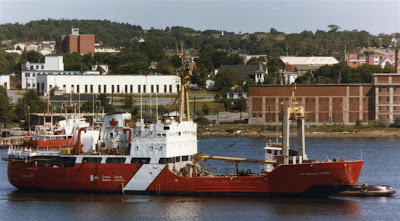 3. Sir Humphrey Gilbert emerging from Halifax Shipyard during her refit. The new bow has been attached, but the mid-body and stern have not been repainted yet. Legend has it that the new bow was built to original construction dimensions, but turned out to be 2 inches too wide for the hull. In the background is CCGS Daring, ex RCMP Wood. The tug is Point Valour. Photo date September 15, 1985. 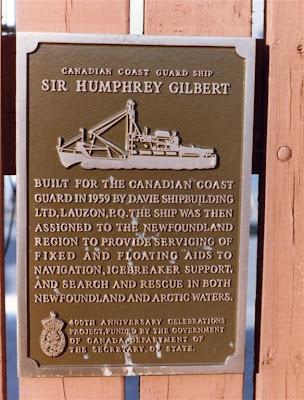 4. A plaque in St. John's, NF shows the ship in it original configuration, with lifting gear mounted on the bridge front, in typical DoT/CCG arrangement. Photo taken March 15, 1988.