Atlantic RoRo Carriers (ARRC) http://www.arrcm.com/ make occasional calls in Halifax, on their operation between St.Petersburg, Russia to Baltimore, New Orleans and Tampa. Long time users of Astrakhan-class ships, ARRC are now adding newer vessels. I featured the Astrakhans back in January: http://shipfax.blogspot.ca/2015/01/astrakhan-loros.html
The newer ships do not have the the RoRo capability, but still have extensive Lift On -Lift Off  equipment. 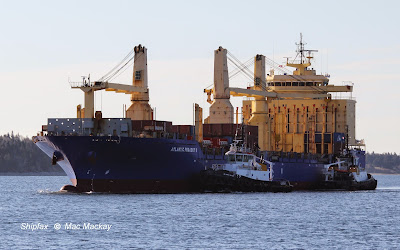 Today's arrival was Atlantic Project II, built in 2002 by Xiamen Shipbuilding Industry Co, measuring 23,132 grt, 30,586 dwt, with a capacity of 1861 TEU (including 150 reefers). Its most impressive characteristic is its cranes. Two are rated at 50 tonnes and two at 100 tonnes. They are able to work in tandem for 200 tonne lifts.
Prior to being acquired by Baltic Mercur JSC of St.Petersburg in 2014, the ship carried the names Antonio-14, Hyundai Jumbo-11, CCNI Antartico-07, CCNI Magallenes-07, Cape Dyer-03. A sister ship Baltic Mercur II also sails for Atlantic RoRo Carriers, reviving the name of a n Astrakhan previously in the fleet.

Atlantic Project II was only docked at Halterm for a few hours this morning and sailed at noon time.