Close Calls in the harbour

The French naval patrol vessel Fulmar elected to leave her berth without a pilot this morning to assist in the start of the St-Pierre sailing race.
She, and the assembling yachts, generated several tense moments with arriving ships. The sailing vessels kept to the western side of the harbour before the race start , but the Fulmar was not as cooperative and insisted on sailing out, sans pilot, and without anyone on the bridge who spoke fluent English. Functional English was not adequate for the situation.
Her very close pass with the inbound Essen Express will surely be the subject of an investigation of some sort.
After the race start the boats soon got into fog and started wandering around in various places they shouldn't have been, giving a bit of a scare to some of the local tour boats.
The next incident is said to have occurred when the inbound gypsum boat Ambassador tried to arrange passing with Fulmar. Again English comprehension was an issue and a close call was narrowly averted.
The Royal Nova Scotia Yacht Squadron was also not much help in this situation either. Its race committee boat, Enos Collins, was reportedly incommunicado for several periods of time, and allowed the participants to wander at will all over the traffic lanes.
When the outbound Algonova (seen in the background of the race start) had disembarked her pilot, he was transferred to Fulmar. By this time however she had passed all outbound traffic and the crisis was over. 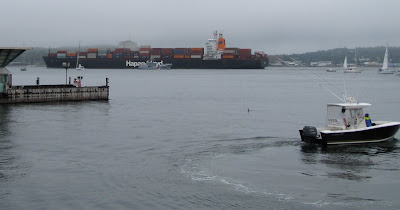 1. A puzzled cormorant gets birds eye view of an uncomfortably close pass between Essen Express and Fulmar. 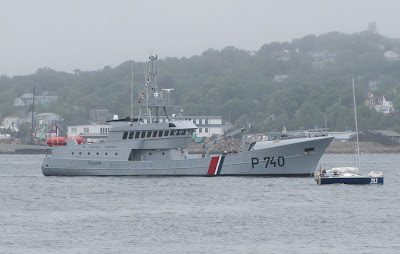 2. Victim or villain? Fulmar was given clearance to proceed to sea without a pilot, at a time of busy traffic and limited visibility.

3. The race start, with the usual milling about. The RNSYS race boat Enos Collins is at the far right and the outbound tanker Algonova is in the background.

Some serious questions arise from this incident. First, how could Halifax Traffic give clearance to this vessel when she had no pilot aboard? Second, when Halifax Traffic finally came to and realized that the vessel needed a pilot, why did they not order it back to its berth or to anchor?
And third, when will Halifax Traffic get over its snit about pilotage? This "turf war" or whatever it is between the two organizations could have resulted in a serious incident. I think it's time to grow up and behave professionally.
For the record foreign flag vessels (other than small craft) require pilots. Outbound vessels are required to give 12 hours notice of intent to depart port. They are required to confirm the intent again at 5 hours from sailing and again at 2 hours from sailing time. All this is to ensure that a pilot will be available when the ship wishes to leave.
Foreign naval vessels are not immune from this requirement, but this is not the first time that a foreign naval vessel has done this in the past year.
Posted by Mac at 9:45 PM