Liberty of the Seas

The Royal Caribbean International Freedom class Liberty of the Seas made a wide sweep around George's Island this morning on its approach to pier 20. 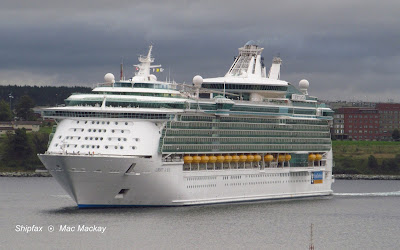 Built in 2007, the ship and its two sisters, Freedom of the Seas and Independence of the Seas  held the title of world's largest cruise ships until 2009 when the even larger Oasis class ships came along.
Rivaling in size the container ships mentioned yesterday, this ship measures 154,407 grt and has a capacity 3,634 passengers and 1360 crew. With an overall length of 1,119 ft it makes remarkably sharp turns using a variety of thrusters, all without the need of tugs.
The ship is based in Port Liberty, in Bayonne, NJ, on the western side of New York harbor. After the autumn season it will transfer to Galveston, TX in November.

Labels: Liberty of the Seas