Sunday round up: Autoport's safety valve, ACL's substitute, and please take a bow - any bow

With four autocarriers due in Halifax in the space of two days, Autoport needed congestion relief. As it turned out there was relief in sight. 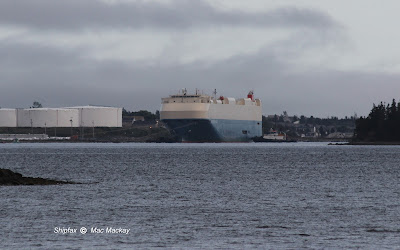 Cattleya Ace ready to sail from Autoport, with tug alongside.

While the larger Cattleya Ace  took up the usual Autoport berth, Glovis Century made the transit up to Pier 9C  where it quickly began to unload a dock full of Italian built Jeeps (Fiat owns Chrysler owns Jeep) North American export cars including Fords, Chryslers, and Jeeps. 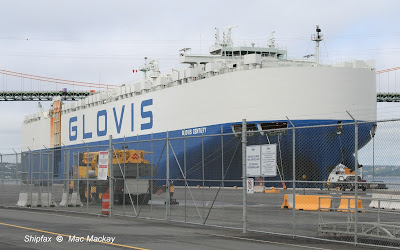 Glovis Century ties up at Pier 9C. It is the first autocarrier to use the multi-functional pier, which was just completed this year. The pier face is 1640 ft long and has a minimum 45 ft depth of water alongside and 450,000 sq ft of open area.

A portion of Pier 9C is already filled with cars after 4 hours of unloading. 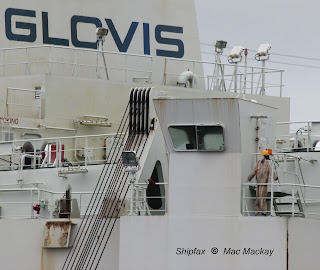 It will be interesting to see how these cars will be shipped on from Halifax. They may well be transported overland to Autoport for prep work before leaving by rail. The cars are to be stored at Pier 9C while the ship goes to Montreal to load a military cargo. The fully loaded ship would draw too much water for the St.Lawrence River, so it was decided to offload here where there was available space. The ship will return for the cars in ten days or so.


With Atlantic Container Line transitioning into its new fourth generation ships, it is using the conventional container ship Northern Delegation to cover a spot in the rotation. It does not carry RoRo cargo, and appeared to be lightly loaded on departure today. 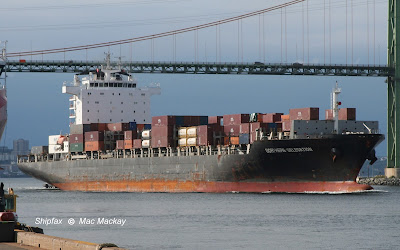 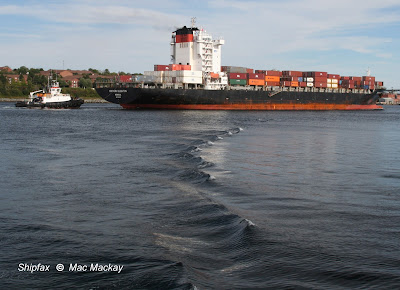 As it made the sweeping turn past the knuckle between Pier 9 and Pier 9A, it set up a miniature standing wave with its bulbous bow. The tug Atlantic Oak is providing tethered stern escort by regulation.
Ships details: http://shipfax.blogspot.ca/2015/07/northern-delegation.html

Featuring a different kind of bulbous bow, that began to makes its first appearance in the past year or so, Equinox Star shows a non-projecting bulb. This is similar to the original bulbous bows of the 1940s and 1950s, and is more suitable for bulkers and tankers that do not require great speed.

After bunkering, the ship sailed in ballast for Lower Cove, NL to load aggregates. It carries four 30 tonne cranes and four 12.5 cubic meter capacity grabs (they are the yellow objects lashed on deck) for discharging cargo.

Speaking of bows, the Canadian Coast Guard Ship Sir William Alexander sailed this afternoon. Equipped for buoy laying it also has an icebreaking bow and is classed as a light icebreaker. 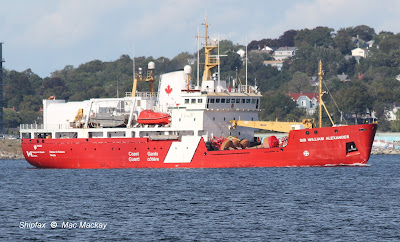 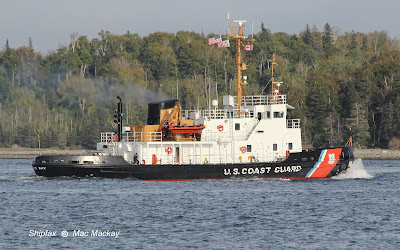 Also sailing today was the United States Coast Guard Cutter Morro Bay. It is also classed as an icebreaker and was built to serve the USCG on such bodies of water as the Hudson River and the Great Lakes. It was already pitching as it left the harbour. Its bluff bow and egg shaped hull are not built for deep sea work, but each year one or more of these craft sail to and from the Great Lakes. They often stop over in Halifax for a day or two en route.
Although its AIS gave its destination as Boston, I believe it is headed to the Lakes to replace USCGC Bristol Bay, which exited the Lakes in August.