The auto carrier Grande Florida made its first call in Halifax today, October 22. It is one of seven ships of its class built for Grimaldi Europa SpA of Italy. 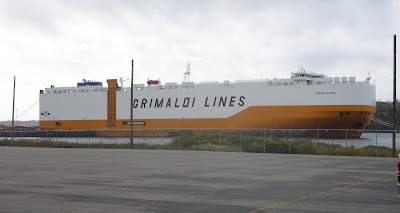 The ship called at Autoport only, and did not discharge any RoRo cargo on the Halifax side. That kind of cargo can be carried by the ships of the Atlantic Container Line, which is also owned by Grimaldi.

In bright sunlight the ship's yellow hull really stands out.

The MSC Pamela was still working at PSA Halifax today, so it must be here on paying business, rather than just picking up empties. As an unscheduled caller it is likely clearing a back log of cargo for an established route. 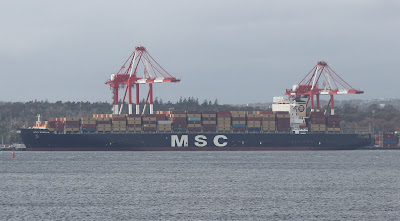 The truck gate at PSA Halifax was still jammed up at 5 pm today as last minute cargo was also arriving for Oceanex Sanderling. 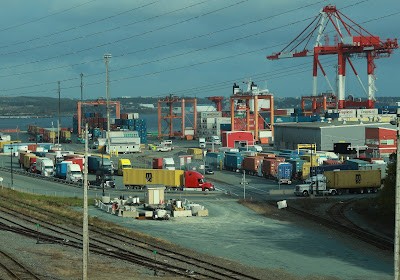 PSA Halifax was bustling today. At Pier 41 Oceanex Sanderling was loading for Newfoundland, but MSC had boxes coming and going.

It is difficult to keep track of all the container ship schedules these days, since there have been "blanked" sailings, where the ships have bypassed the Port of Halifax. This may be because of delays in other ports, and owners are trying to make up time by skipping smaller ports such as ours. Interestingly there have also been unscheduled arrivals. These are container ships that are not regularly scheduled for Halifax, but are deviating from regular routes to stop here or they are "extra loaders". Due in the early hours (that is while it is still dark) of October 21 is one such "extra loader", MSC Pamela. It has been anchored off Halifax since October 19. (Way out in the anchorges there is heat distortion and a maxed out lens that fuzzify the image. Those are fishing vessels on the far background, and the Mars Rock buoy H9 in the foreground.)

(For more info see: Mars Rock on the Maritime Museum of the Atlantic's Marine Heritage database.) 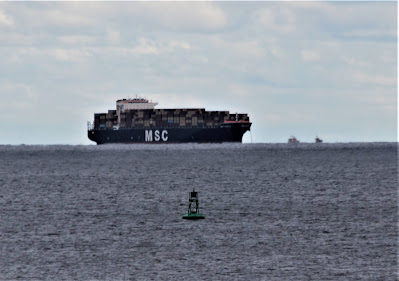 Samsung Shipbuilding + Heavy Industry Co built the MSC Pamela in 2005. It is a large ship at 107,849 gt, 110,592 dwt, with a capacity of 9178 TEU including 700 reefers. While it does not appear to have much additional container capacity, it is apparently coming in to pick up empties.

Many ports, particularly in Europe, are so clogged with empty containers that they have been refusing trucks entrance to the port if they are hauling empties. These extra loaders are sent to retrieve as many empties as they can to return to Asia.

Technical issues may prevent frequent postings over the next few days or weeks. I have been instructed to be patient while a solution is found. Please bear with me.

The German research vessel Maria S. Merian has completed its summer projects in Canadian waters and will be moving on to its next project off northwest Africa. After refueling this morning it shifted from Irving Oil Woodside to the C.O.V.E. dock, and sailed from there late this afternoon. 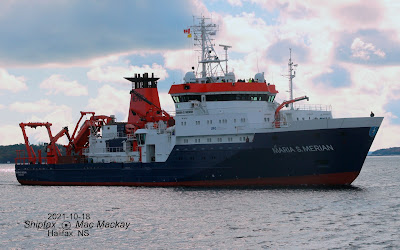 The ship's most recent work off Prince Edward Island involved seismic and other surveys searching for under sea aquafers. This is reportedly pioneering work which may assist in dealing with fresh water shortages in many parts of the world. Prior to that, from July to September its was working in the Labrador Sea exploring the North Atlantic Mid-Ocean Channel (NAMOC) by core sampling and other techniques. The ship returned to Emden briefly between the two missions.

Ever since ZIM started its East Coast North America feeder service, called Canada Feeder Express (CFX), in April 2018 it has been using short term charter ships. All have been about the same size and configuration, and today's first time arrival is no exception. 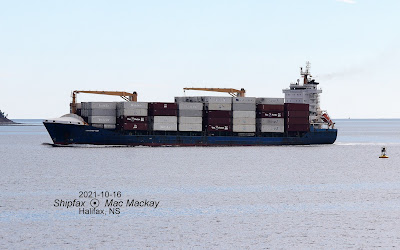 The CFX runs between Halifax, New York and Kingston, Jamaica, using two ships, but the schedule has been disrupted in recent weeks and was reduced to one ship. Published schedules now indicate that Contship Leo will become a regular and the second ship will be the Taipei Trader, which was a regular, resuming in November. It was recently reported en route to Brazil.

The Wallenius Wilhelmsen Ocean ship Tulane arrived in Halifax October 14, unloaded some RoRo cargo at Pier 31 then moved to Autoport and sailed today. On sailing it exhibited one of the scruffiest paint jobs seen recently. 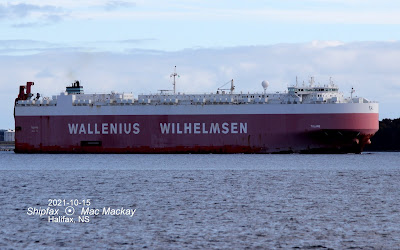 It may be among the last ships in the traditional Wilhelmsen orange. Most others have been repainted in the new joint colours. The ship was built in 2012 by Hyundai Ulsan, it will be due for a ten year survey sometime next year, so will likely get the new paint during that drydocking. They have apparently used up some of the old orange along the waterline.
It is a 72,295 gt, 28,818 deadweight vessel with a 7934 CEU capacity. The ship is not on the usual route for autocarriers: Zeebrugge Oct 3, Southampton Oct 4, Santander Oct 6 and is not due to call at any US ports en route to Manzanilla terminal, Panama.
The ship follows the Wilhelmsen tradition of ship's names starting with the letter "T". Presumably it is named for the New Orleans university, home of the Green Wave.
.

It is considerably larger than the first ship to call on the Indus 2 service, MSC Stella, a 6724 TEU ship that was in port October 5-6.

quite bit larger than the first ship that called last week, MSC Stella

All in a day's work

Halifax is a great harbour for shipwatching because of the great variety of shipping that can be seen on a given day. Of course container ships get most of the glory due to their size and colourful appearance. 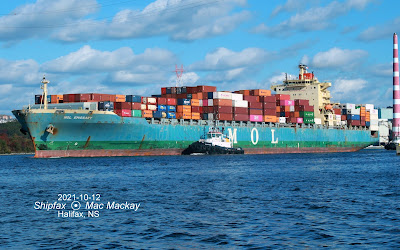 The 5087 TEU MOL Emissary dates from 2009 when it was built by Hyundai, Ulsan for Seaspan Corp. It is chartered to MOL (a partner in ONE) and working for THE Alliance on the AL5 service. I have photo'd the ship many times as it passes through the Narrows en route to the Fairview Cover container terminal.
Another often photo'd ship is CSL's Thunder Bay, en route to Gold Bond Gypsum's dock in Bedford Basin. 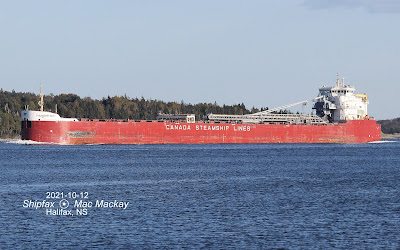 The self-unloader, built in 2013 by Chengxi Shipyard in Jiangyin, China is a 24,430 gt, 34,433 dwt ship that sails under the Canadain flag and works in and out of the Great Lakes. The noticeable abrasions on the hull near the bow signify frequent passages through the locks of the St.Lawrence Seaway.
Naval vessels are also frequent callers in Halifax, since the port is home Canada's east coast navy base, at HMC Dockyard. The Canadian Coast Guard also has a large presence here as does the Department of Fisheries and Oceans of which it is a part.  When a member of the United States Coast Guard visits Halifax it is usually as a guest of the Royal Canadian Navy, which has better facilities but is also a military organization, which the Canadian Coast Guard is not. One such guest for the past few days has been USCGC Healy WAGB-20, which sailed this afternoon. 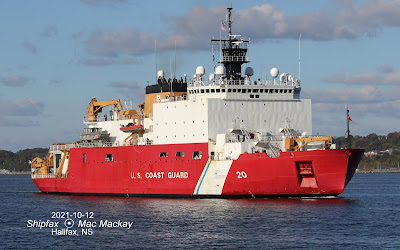 The ship recently completed a west to east Northwest Passage. These northern waters are claimed by Canada as territorial waters, while other nations claim they are international waters. Canada is increasing its activities in the north in order to underscore its claim, and sent HMCS Harry DeWolf on an east to west Northwest Passage. Although the USA is one of the nations claiming the waters are international, it nevertheless went though the process of advising Canada in advance of Healy's trip. The trip was also completed in compliance with Canadian environmental and health regulations for the Arctic.
The Canadian Coast Guard was at work today as CCGS George R. Pearkes did some buoy tending off Halifax. The ship has been drafted in from Newfoundland while other ships are in refit. 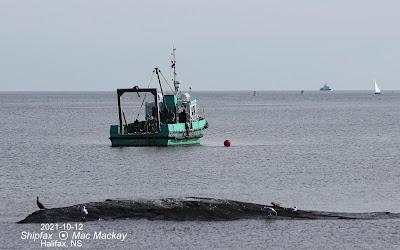 The Pearkes is visible on the horizon as Dominion Bearcat works on some reef balls off Black Rock Beach, Point Pleasant Park. Despite the best efforts of generations of seabirds the black rocks are still black.  (mostly).

Not to neglect the tug industry, see also today's post on Tugfax

And as a follow up on yesterday's post, the tanker New England moved alongside Irving Oil's Woodside terminal late this afternoon. If you didn't catch my amendment yesterday there was more information added after the initial post.