The bulk carrier Sveti Nikola I arrived in Halifax this afternoon. Despite rain and fog , it found it s way to anchorage #7

Built in 1997 by the Uljanik Shipyard in Pula, Croatia, the ship was owned by the well known Atlantska Plovidba of Dubrovnik until sometime last year. Since then, ownership has been translated to TNT International of Athens, and the  ship's flag changed from Croatia to the Marshall Islands.

The G6 Alliance of container lines which call in Halifax, is still bringing in a variety of ships from its several partners. 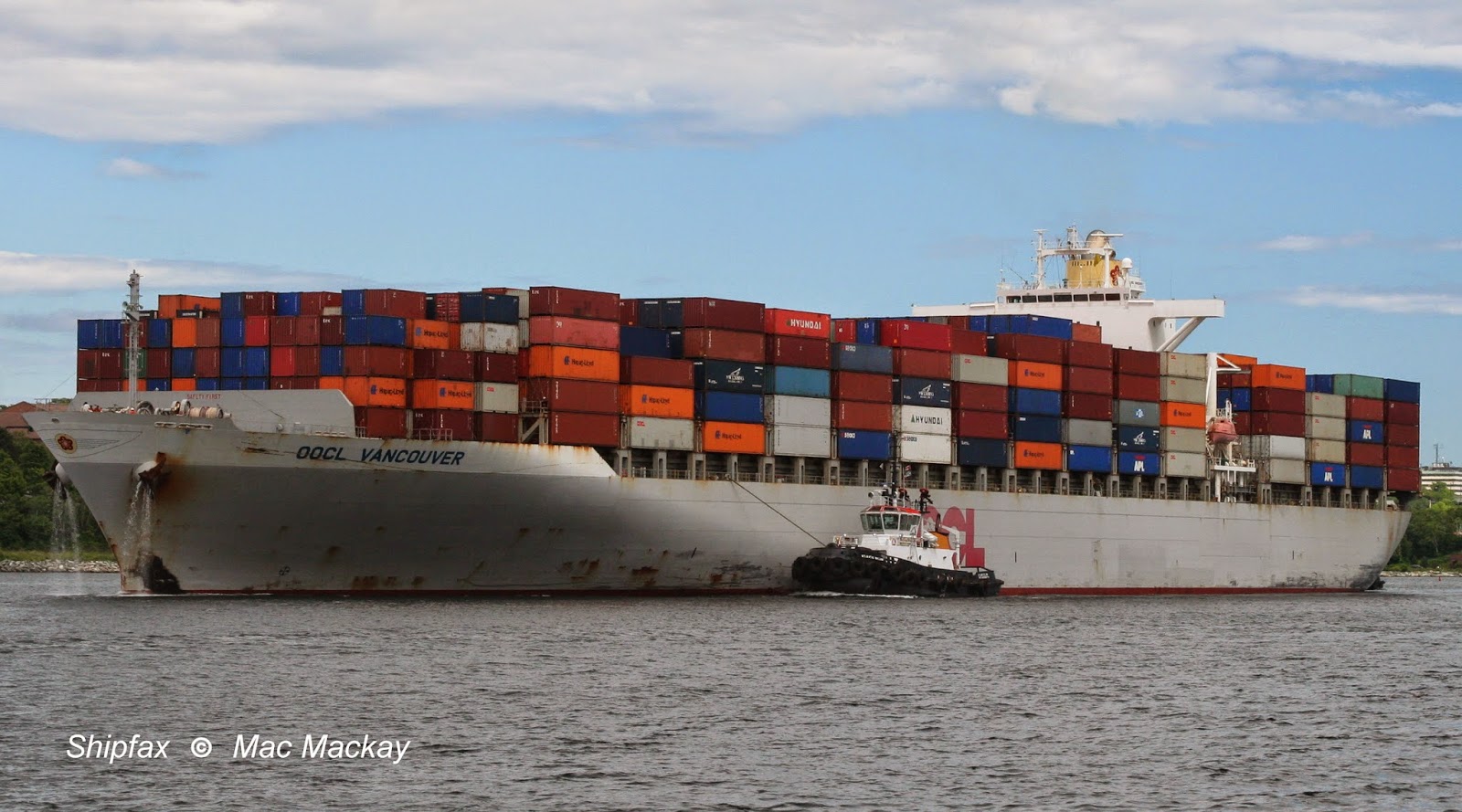 Sunday's arrival was OOCL Vancouver a post-panamax type, measuring 66,462 gross tons and carrying 5885 TEUs, it has been an off and on caller here since the Alliance was formed on 2011. Built in 2006 by Koyo Dockyard Co of Mihara, Japan, it carried the name OOCL Italy from 2010 to 2013. It now flies the Panama flag and is owned by Shoei K.K of Japan and chartered back to OOCL. 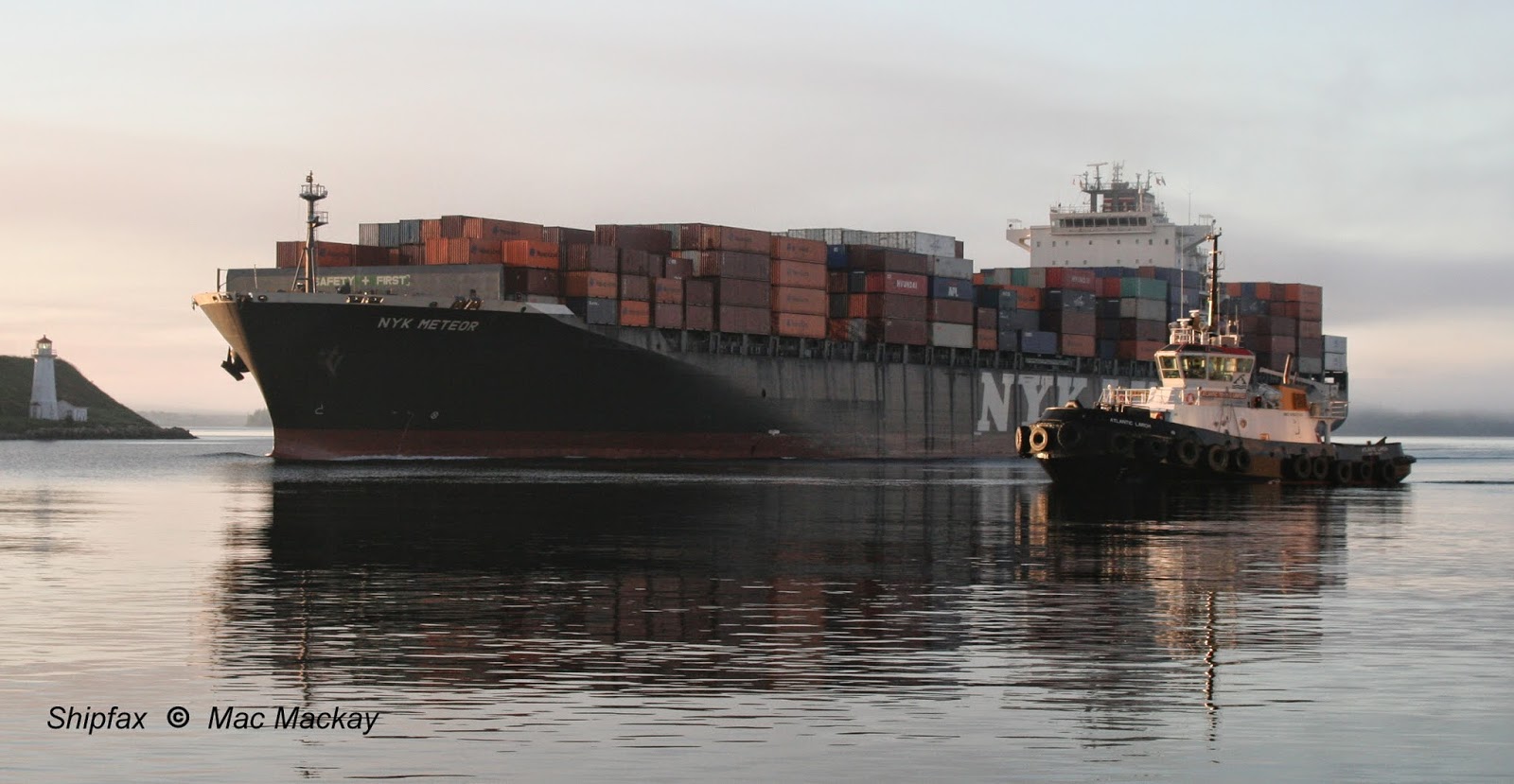 Other members of the G6, Hapag-Lloyd (now merged with CSAV), APL, Hyundai Merchant Marine, and Mitsui OSK, along with OOCL and NYK, have 29 different combined trade routes around the world.

Not so rosy is the future for the proposed P3 Alliance of the world's largest container lines Maersk (15% of world's container capacity),  MSC (13% of capacity) and CMA CGM (9%). The ship-sharing plan was developed to deal with a huge over capacity of ships, ordered during boom times and delivered during the recent slow shipping market.
Approved by US and European regulators, the P3 plan was canned by China last week, much to the surprise of the proponents. Citing the need to protect smaller lines (some of which, not coincidentally are Chinese state owned) China denied permission for the P3 to start up. The three partners have thus scrapped the idea - and will soon have to start scrapping ships. 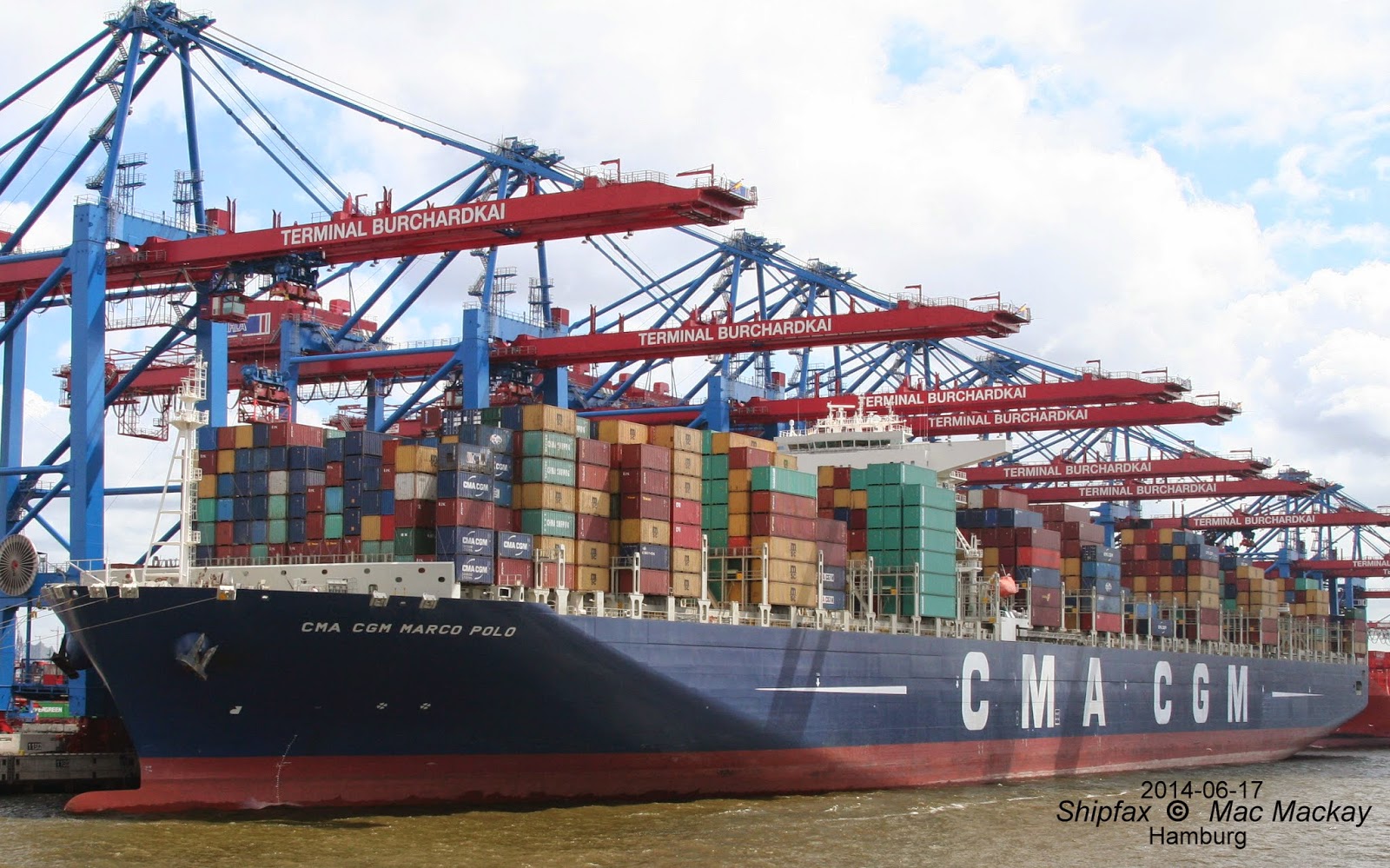 I spotted the ship last week in Hamburg, with seven cranes working cargo.

Smaller lines have also over built, and they must be heaving a sigh of relief with the death of the P3, but over capacity will continue to be a problem for some time.

The Woodward Group tanker Alsterstern put in for a pit stop today, topping up her fuel tanks from Algoma Dartmouth then headig out to Saint John to load cargo. 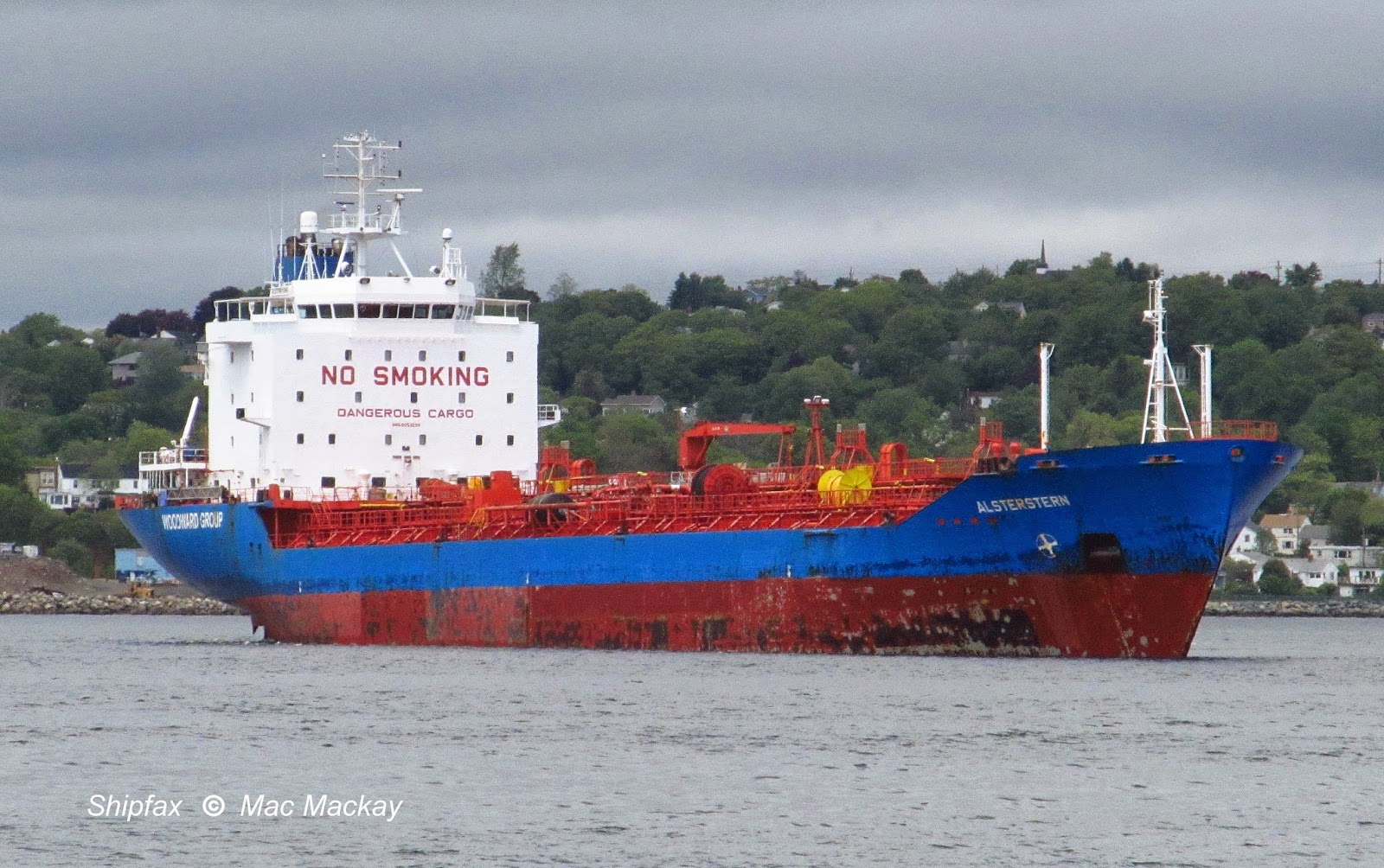 Coastal Shipping Ltd., the Woodward tanker subsidiary, runs five tankers, all of them ice class, which in summer serve Newfoundland, Labrador and the Canadian arctic. Alsterstern and two identical sisters, Havelstern and Travestern are frequent callers in Saint John, but along with smaller fleet mates Dorsch and Nanny also run up the St.Lawrence to load.

CCGS M. Charles M.B. was officially registered in Ottawa June 11, preparatory to hand over to the Department of Fisheries + Oceans. 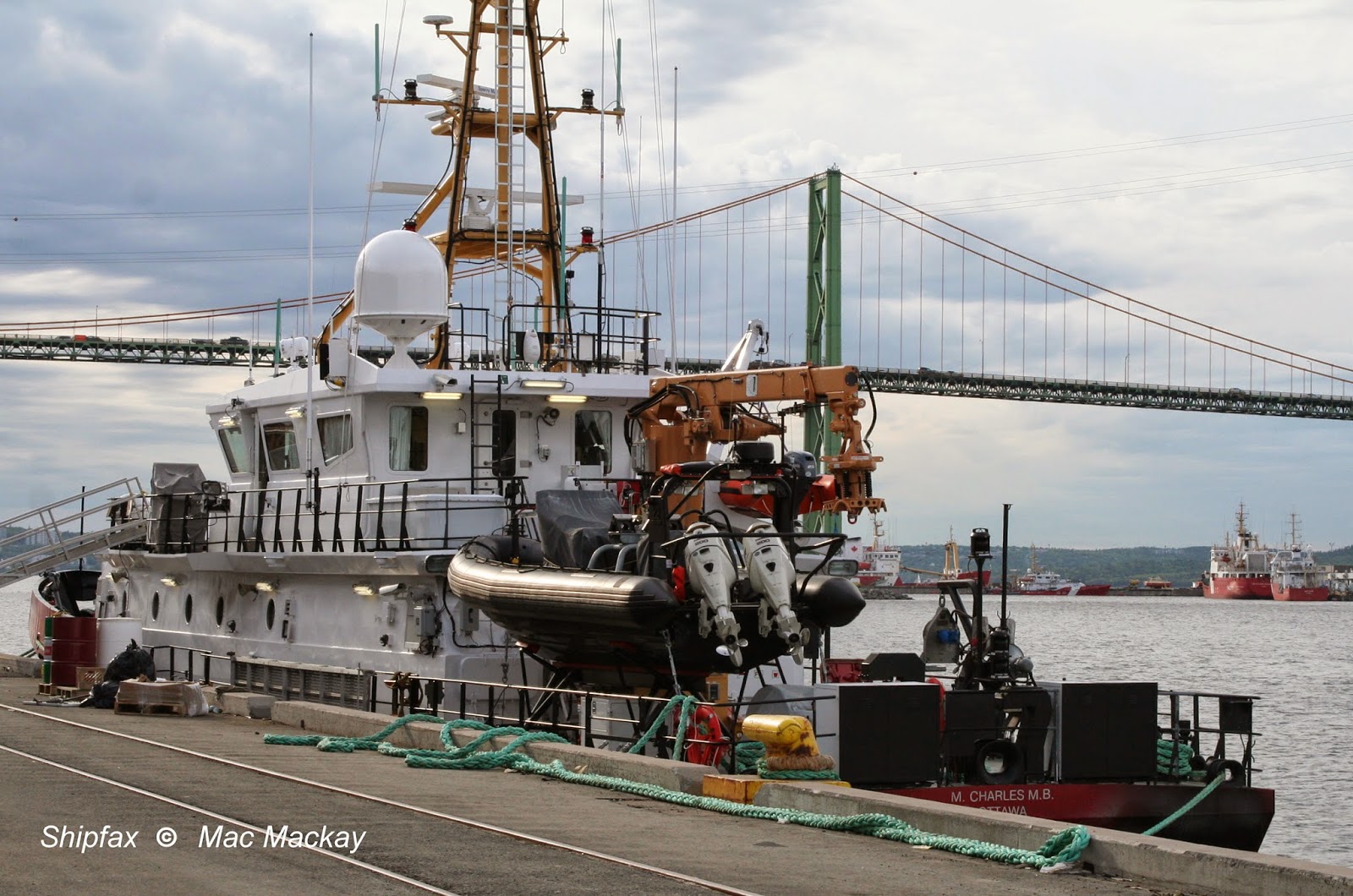 As of this evening the boat was still tied up at pier 9 C, Halifax Shipyard's fit-out and trials berth, and was still flying the Irving Shipbuilding flag.
When it is handed over the Coast Guard it will be based in British Columbia, with the last boat in the class, Captain Goddard M.S.M.  That boat has not begun trails yet.
As of last report, the boats will be transported to the west coast as deck cargo on a heavy lift ship.

A Panamanian flag bulk carrier that was aground near Rose Blanche, NL in March has now hoisted the Canadian flag.

It was later revealed that the ship also tore up a section of underwater cable, that required a costly repair.

Now an anonymous company, 8393087 Canada Inc* of Matane, QC has acquired the ship and registered it today in Quebec City as John T (another economical renaming-with the stroke of a paint brush).

Built in 1991, by Hyundai, Ulsan, the ship has carried the names Sarych to 1993, Sarrah to 1994, Sarych to 1994 and John F to 2012. A basic four crane bulker, it would seem to have limited commercial value under the Canadian flag, unless it is to be used for summertime northern supply work or some other specialized activity.

* Incorporated December 27, 2012, the company shares an address with Méridien Maritime, a well known boat builder and operator. They are also the proponents behind a new drydock at Cacouna, QC. See: http://www.meridien.cc/fr/index

The perennially popular Queen Mary 2 put in today, and as usual was backlit by the morning sun. 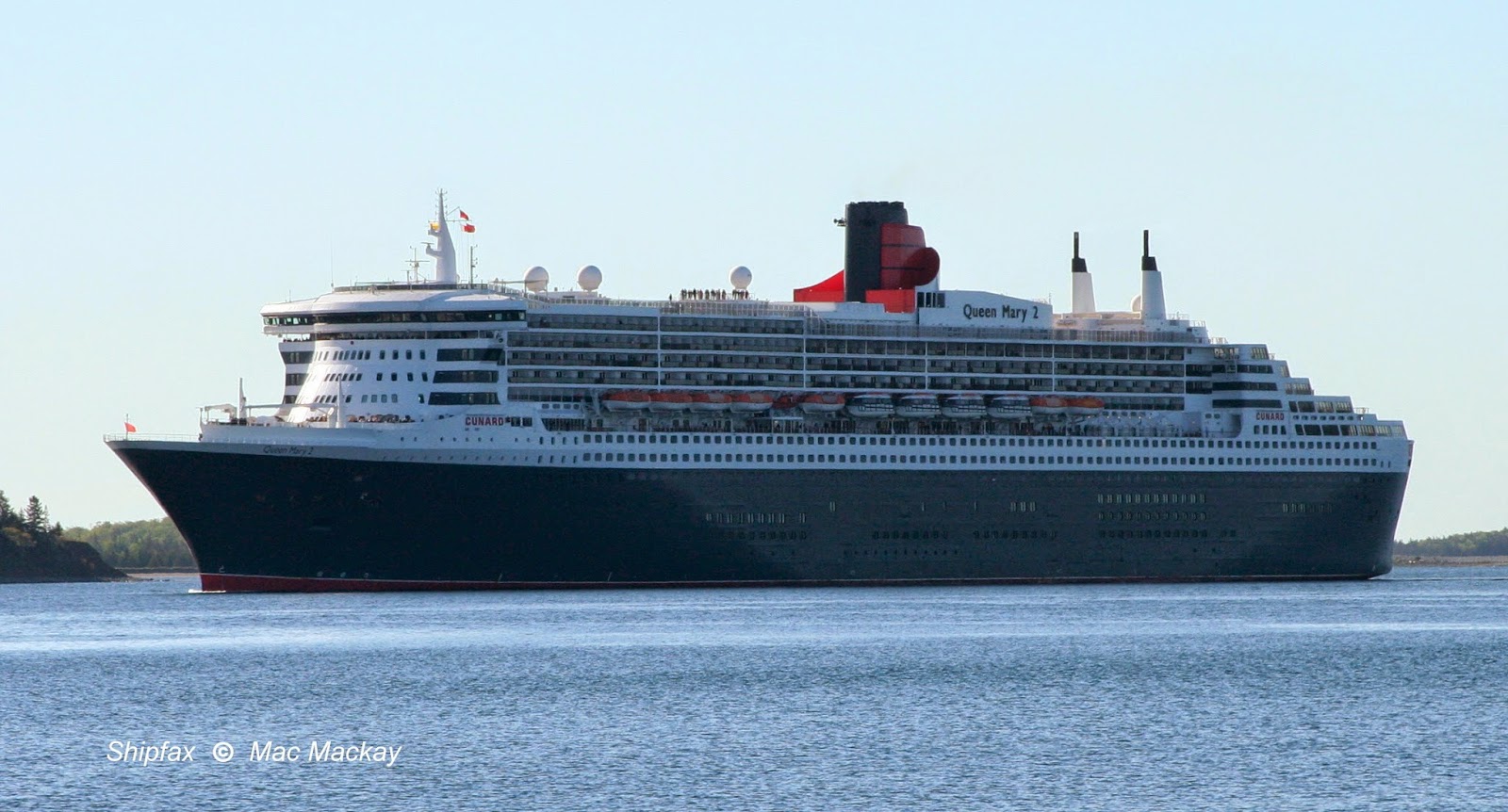 Based on her inbound course, it seems likely that she will berth port side to at pier 21-22, meaning that when she sails later this afternoon, she will head north around George's Island. That decision is at the pilot's discretion, and depends on other harbor traffic and wind. The alternative is to back out into number one anchorage, south of George's Island, then turn and head outbound for sea.

Ted and Bill - back home after their excellent adventure

The Canadian Coast Guard ships Edward Cornwallis and Sir William Alexander are tied up at the DFO pier at the Bedford Institute for the first time in a month.
Both vessels, classed as light icebreakers, were sent out far afield from Halifax this winter and spring, to provide icebreaking services in Newfoundland, and only appeared in their home port a month ago for crew change.

Sir William Alexander left her home baser in January and aside from the May 14 crew change, was working in Newfoundland, PEI and the Gulf of St.Lawrence.


Edward Cornwallis was last in Halifax May 13 for crew change and returned immediately to Newfoundland, only sailing for home June 7. Newfoundland-based Cape Roger was in Nova Scotia waters covering her for Search + Rescue and patrol until this week.

Cape Bon stands by in the Basin

The handysize tanker Cape Bon is anchored in Bedfrod Basin awaiting its turn at Imperial Oil. It seems that it will have to wait until another tanker unloads, and it is not due until tomortrow.

Built in 2003 as Cape Bond by Hyundai Mipo Dockyard in Ulsan, South Korea, the ship took its present name in 2006 with a quick stroke of the paint brush.Owned by Columbia Ship Management of Hamburg, it operates in the United Product Tankers pool of 46 tankers, 30 of which are nearly identical handysizes, with epoxy coated tanks. UPT is also based in Hamburg, with offices in Stamford, CT and Limassol, Cyprus.
At 25,108 gross tons, 40,108 (maximum) deadweight,it is a typical tanker of the handysize type.

Even at this time of year autocarriers arrive too early in the morning for good photos from my normal vantage points. So it was with Wallenius Wilhelmsen's Talia, which took its pilot at 05:30 this morning. It finished its work at Autoport about 11:30 and was thus outbound at 12:20- with a high overhead sun. Still less than ideal, but a photo must be taken!

Talia outbound for Davisville, RI. It arrived earlier from Emden.

Talia has a capacity of 6500 autos, and has four hoistable car decks, allowing it to carry trucks and other high vehicles.It is on long term charter to Wallenius Wilhelmsen by Ray Car Carriers, of Douglas Isle of Man, and is operated by Stamco Ship Management of Piraeus, Greece. With all that said, it flies the Bahamas flag.
It was built in 2006 in Gdynia, Poland and measures 57,692 gross tons. 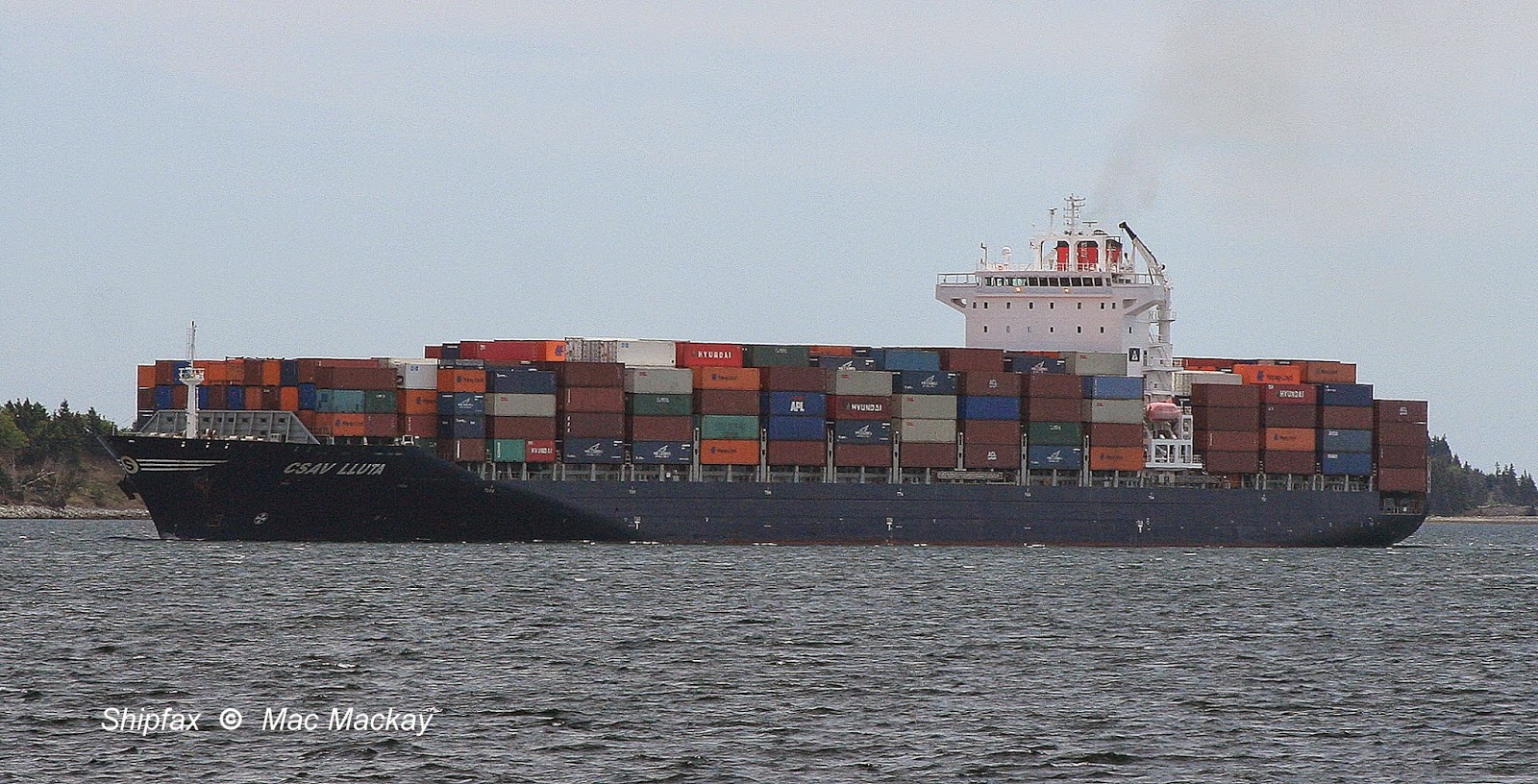 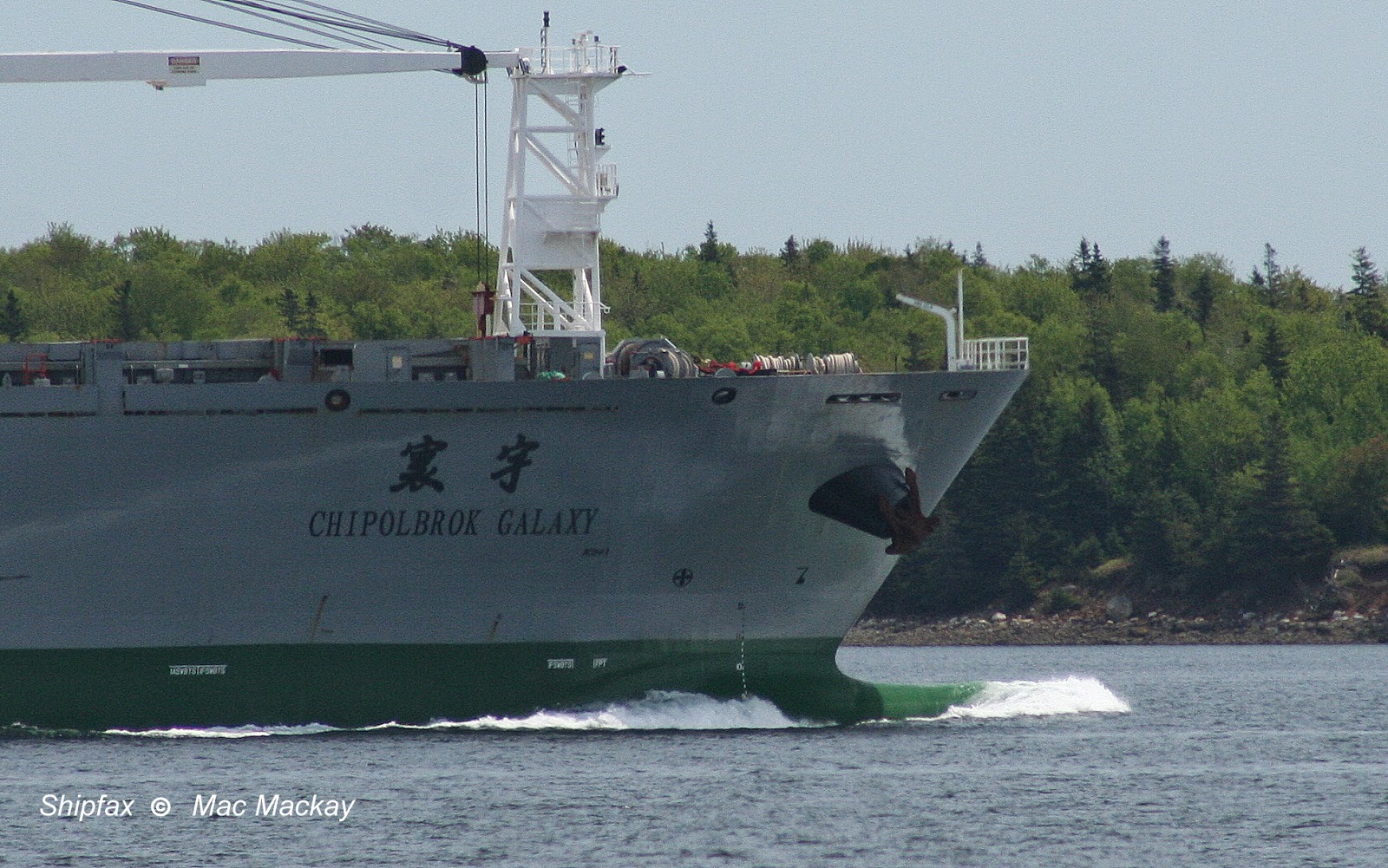 The bulker Danhil bunkered in Halifax today en route to Port Cartier for a load of iron ore.

As Danhil comes to anchor the agent's launch Captain Jim (see Tugfax) stands by until the pilot disembarks and the bunkering tanker comes alongside. 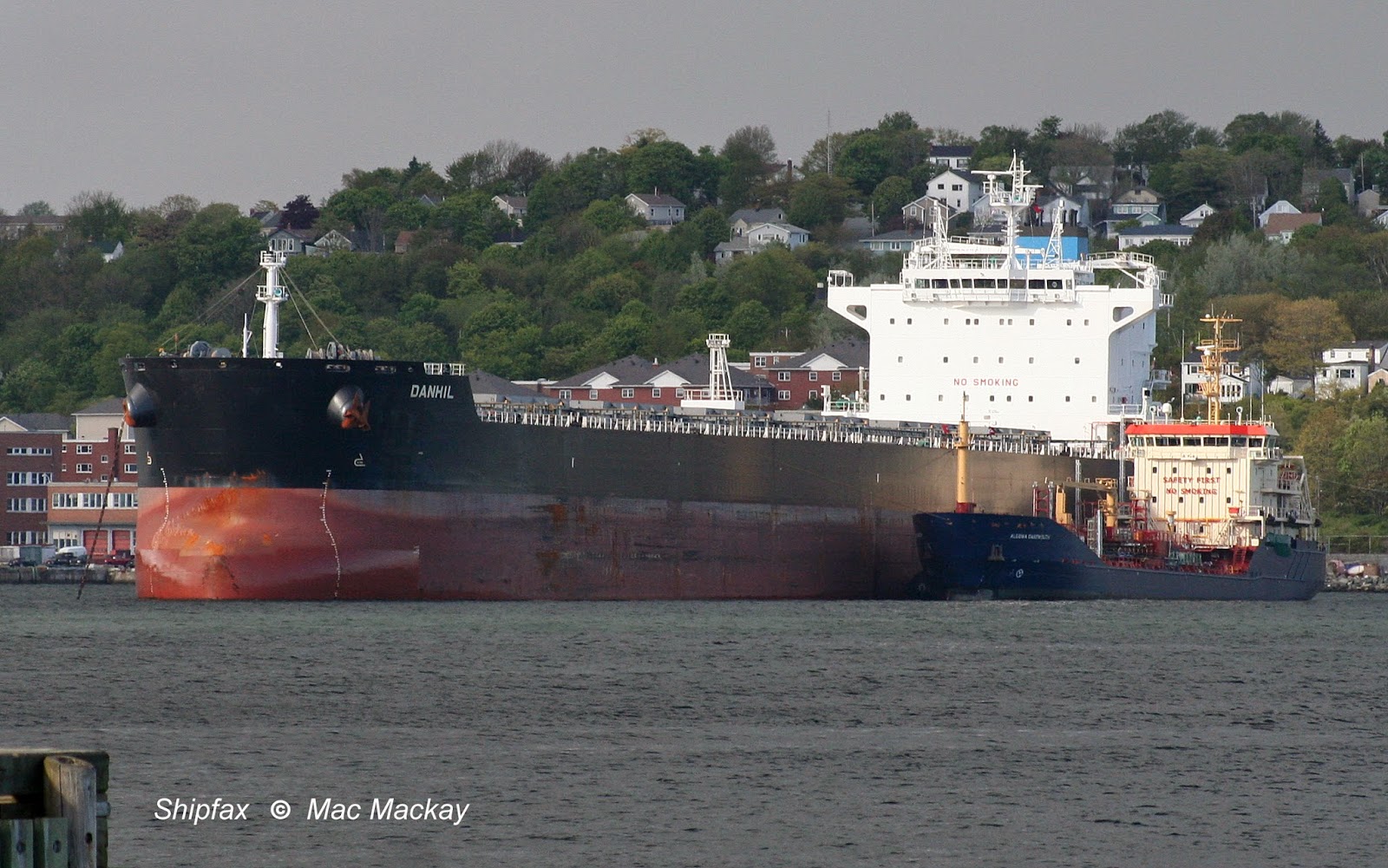 Danhil has just about completed bunkering from Algoma Dartmouth.

Built in 2012 by Sungdong Shipbuilding + Marine Engineering of Tongyoung, South Korea, Danhil flies the Liberian flag, and is operated by Marlow Navigation Co Ltd of Limassol, Cyprus.[ Marlow was the narrator in several wonderful Joseph Conrad stories including Lord Jim, Youth and Heart of Darkness.]

Another new to Halifax ship for Zim arrived and sailed in dense fog. There was enough sun during the day to burn the fog back enough for a photo.