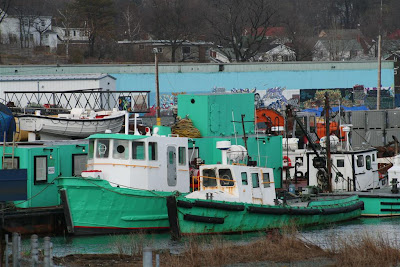 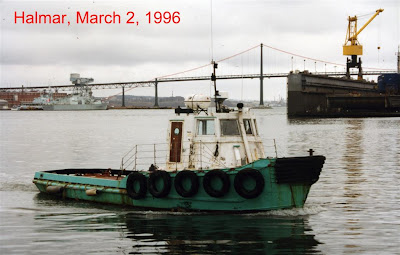 While prowling about the harbour on Saturday April 4 I came across the veteran workboat Halmar back in the water at Dartmouth Cove after several years on land. Her owners, Dominion Diving, have been working away on her for some time, and she is now showing signs of returning to service.

The boat was built by Halifax Shipyards back in 1960 as a general purpose workboat. She sometimes assisted ships in the Dartmouth Marine Slip, but more often she worked around the Halifax installations.

Dominion Diving took over ownership about 1992 and did a major refit on her at that time. However her cabin was very small, she was underpowered and had many other deficiencies. (Rumour has that she was built by apprentices at the shipyard.)

Alongside in the contemporary photo is fleet mate Big Steel, the former navy launch YFU 116, YMU 116, built in 1955 by Russel Brothers of Owen Sound, ON. Dominion Diving also rebuilt her back in 1992.