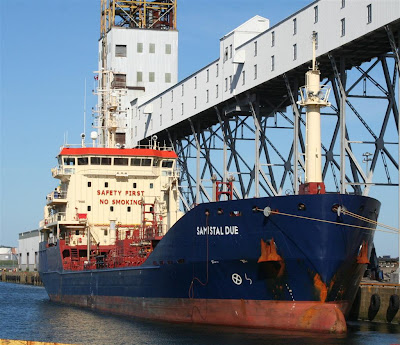 Algoma Tankers will apparently place a new tanker in service in Halifax about August 1. The ship is the Samistal Due, ex Clipper Bardolino-08, a 2999 gross tons ship, built in Turkey in 2007. She arrived at pier 25 on Tuesday July 14.
The ship will deliver bunkers to ships and other customers within the confines of Halifax harbour. She is to be renamed Algoma Dartmouth. Although she will fly the Canadian flag and carry a Canadian crew, she will not be "duty paid", and thus will have to receive permission from the Canadian Transport Agency to work in Canadian waters. She will also have to satisfy the government that no other suitable Canadian tanker is available for the work. We can assume from this that Algoma have chartered the ship for a year and not purchased it outright. The bunkering tanker NT Dartmouth, the former Imperial Dartmouth, built in Collingwood in 1970 and now operated by Northern Transportation will presumably be put out of work as a result of this development.
Posted by Mac at 9:18 PM