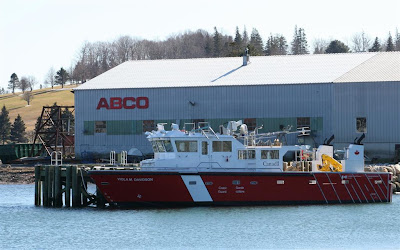 The research vessel Viola M. Davidson was registered in Ottawa on April 6. The 59 gross ton aluminum hulled vessel was built by Abco Industries Ltd in Lunenburg, and is seen here fitting out at their dock on March 6.
Abco (formerly known as Atlantic Bridge Co) has built several small aluminum craft for the Department of Fisheries and Oceans recently, but this appears to be the most sophisticated.
The vessel's namesake, from what I can determine, is or was a scientist of some note.
Update: An article in the Halifax Sunday Herald April 18 tells more about the construction and operation of this vessel. It will operate out of St. Andrews, NB, where Ms. Davidson was one of the first female marine scientists. As with all CCG DFO vessels it will be multi-tasked to Search & Rescue if needed, but its primary role is research. As such it can be fitted with several types of fishing gear and other scientific apparatus.
Posted by Mac at 10:11 PM