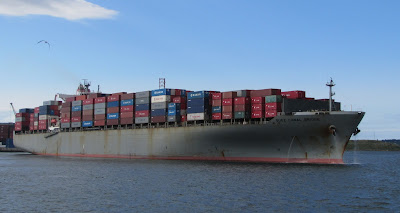 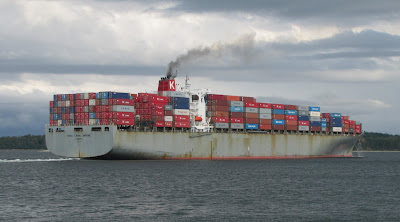 The aptly named Suez Canal Bridge stopped in today on the K-Line service. The ship is a post-Panamax, and reaches Halifax from the far east via the Suez Canal and passes under its namesake bridge to get here. That bridge has several names, as you will see from this Wikipedia entry: http://en.wikipedia.org/wiki/Suez_Canal_Bridge
The ship was built in 2002 and carries 5610 TEU. Oddly, perhaps, for a post-Panamax ship, it is registered in Panama. She is a sister to Tsing Ma Bridge, which is posted below.
Posted by Mac at 8:35 PM