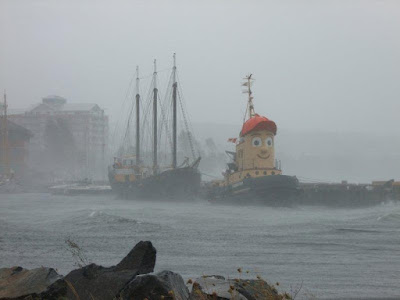 
Halifax was struck by Hurricane Earl on the morning of September 4. Fortunately it was a glancing blow. Steady winds exceeding 85 knots and gusts over more than 120 knots were recorded at Chebucto Head-the harbour entrance. Seas were rough and winds were high in the harbour, but we kept smiling.
Fortunately there was lots of advance notice and ships were diverted away from Halifax. The only large commercial ship in port was the gypsum carrier Georgia S, which has been anchored in Bedford Basin for months waiting for work. It had lots of room to move around and was well anchored.
Unlike the situation in our previous hurricane (known as Juan), ships parted lines and alided with other ships, sinking one yacht, damaging two container ships, and tugs were called out to keep a barge alongside and to try to secure other ships in very dangerous circumstances.
Earl's arrival also did not coincide with high water and so the storm surge effect was about the equivalent of a high tide.
Numerous tugs and supply vessels huddled at pier 9, and others anchored in Bedford Basin. Smaller craft, such as the pilot boats, took a lea berth at navy Jetty Lima or at Alderney Landing.
The largest naval vessel in Halifax, HMCS Preserver, was safely accommodated in the Novadock floating drydock at Halifax Shipyards, in the midst of a refit. Other navy ships, small and large, were well battened down at navy piers. Also at the navy dockyard, the corvette Sackville was tied up and under naval supervision.
The retired naval destroyer escort Fraser was on the exposed face of jetty Lima, but again was well secured under naval supervision.
The majority of craft were tied up at pier 9 in the Narrows, where there is some lee from the southerly winds.
So who was in port?
- pier 9: Fusion (more on her above), barge Beaver Kay (spudded) tug Beaver Delta II-lifted out on the dock for refit.
- pier 9A: supplier Mariner Sea, tug Ryan Leet (went to anchor in Bedford Basin), supplier Hebron Sea
- pier 9B: sectional scow (spudded)
- pier 9C: tugs Stevns Battler, Atlantic Fir, Atlantic Oak, Atlantic Poplar, joined by Atlantic Larch during the storm (it moved from Woodside where it was very exposed)
- anchored Bedford Basin: bulk carrier Georgia S, suppliers Maersk Challenger and Panuke Sea (joined by tug Ryan Leet), Coast Guard vessel Earl Grey and bunkering tanker Algoma Dartmouth, tug Tony MacKay
- Bedford Insitute: research vessels Hudson, Alfred Needler
- Bedford: tall ship Silva, Theodore II (see photo by Tom T above)
- Maritime Museum of the Atlantic CSS Acadia, at her normal berth
- Woodside (IEL dock) Atlantic Willow inside pier face, accommodation rig Chemul secured by ground anchors for reconstruction work.
To my knowledge no ships broke loose, although there was some anchor dragging.