A large low pressure zone worked its way across the region this morning (November 26). The accompanying high winds peaked in Halifax harbour around noon, with gusts of about 80 kph (50 mph), causing minor havoc with shipping.

A thin mist of wind driven spray did not obscure vision but made photos appear out of focus.

The coastal tanker Algoscotia moved off the Imperial Oil No.3 dock to anchor in the lower harbour. (Imperial Oil has only recently completed upgrades to its mooring equipment to allow ships to remain alongside in bad weather, but today's gusts were likely beyond the safe range.) 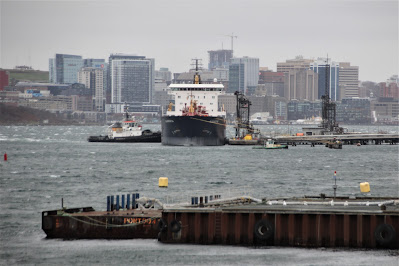 The tug Atlantic Beaver at the bow of the Algoscotia holds it alongside as the linehandling tug Roseway arrives to let the headlines go from the jetty. 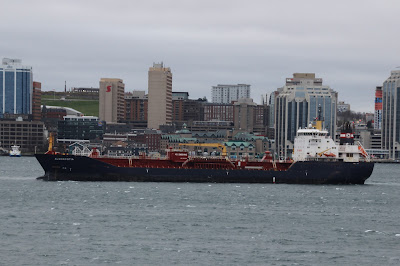 The ship arrived in Halifax November 24 from Imperial's refinery in Nanticoke, ON. It is likely to move back alongside to finish unloading before sailing for Sydney, NS.

At the same time the autocarrier Asian Captain was making its way inbound passing Ives Knoll, but instead of turning into Eastern Passage for Autoport, it headed for lower harbour anchorage too. 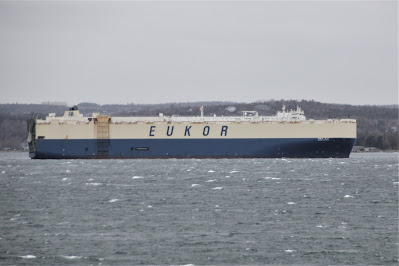 Once in the anchorage position it was apparent that the winds were too high for the ship to anchor. Due to their large surface area autocarriers are difficult to handle in high winds, and are known to drift while at anchor. 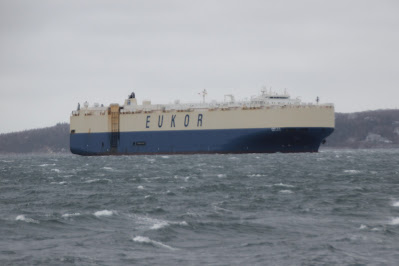 The ship reached the anchorage position at the height of the wind gusts, and the flying spray was at its densest.

The ship swung round in its position and headed back out to sea. 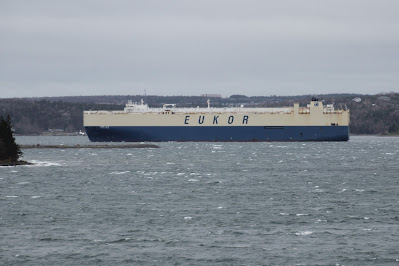 As it passed Ives Point again outbound there was a rare opportunity to see both sides of the ship  without tugs alongside.
Built in 1998  by Hyundai Ulsan the Asian Captain was originally a 55,729 gt, 21,466 dwt vessel, but in 2007 it was lengthened from 228.78 to 248m overall length, thus increasing its tonnages to 71,383 gt, 25,765 dwt. Its original capacity of 6,246 CEU was thus increased to 6,460 CEU.
While all this was going on HMCS Montreal slipped back into port from Operation Wolverine in the Eastern Atlantic with USS Gerald R. Ford and NATO navies.
It was met by navy tugs and safely tied up at HMC Dockyard. 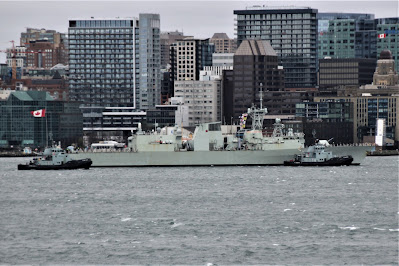 The ship was neatly bracketed between Canadian flags at Summit Place and the Dominion Federal Building. The red colour on Canadian flags showed up surprisingly well in the atomizer-like spray.

The high winds did not seem to deter the big move at Halifax Shipyard. The fourth APOV ship was succesfully transported from the hard stand at Pier 8 to the launch barge Boabarge 37. 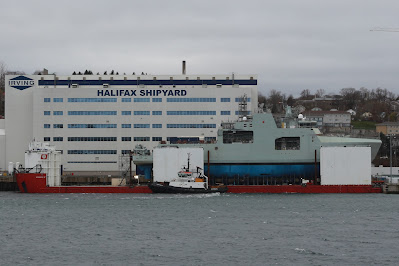 The tug Atlantic Willow holds the Boabarge 37 alongside at Pier 7.

The ship was inched aboard the barge in a morning-long operation using multi-wheel Self-Propelled Modular Transporters (SPMTs). Plans to move the barge to Bedford Basin today have been postponed -  likely to tomorrow - when the ship will be floated off.

Speaking of the Bedford Basin the ConRo Nolhan Ava opted to remain in port until better conditions prevail before settting out on its weekly trip to St-Pierre et Miquelon and Argentia. It went to anchor in Bedford Basin where the X-Press Machu Piccu, Franbo Lohas and Polar Circle have planted teir anchors.

Several other ship arrivals were postponed until tomorrow. Boarding conditions would not unsafe for pilots, but also the ships would be at risk of parting lines while alongside. Also the high winds would preclude container crane operation at the terminals. Tomorrow promises to be a busy day.