Work is underway for the next "launch" at Halifax Shipyard. The fourth Arctic Offshore Patrol Vessel for the Royal Canadian Navy is expected to take to the water next weekend. 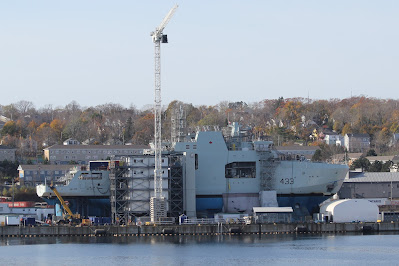 Built largely undercover in "mega blocks" the two main components of the ship were rolled out in June and August and joined on the hardstand at pier 8.

Weather permitting, the future HMCS William Hall AOPV 433 will be rolled onto the semi-submersible barge Boa Barge 37 and transported to Bedford Basin where it will be floated off as the barge is submerged.

The shipyard has no floating dock of its own, so has chartered the Norwegian flagged Boa Barge 37 which has been on standby for the AOPS launches and the odd component transfer across the harbour from the Woodside plant.

Halifax Shipyard did have floating drydocks at one time - see my post from November 9, 2015- and in fact it was forty years ago this month that its largest unit was delivered to Halifax (in two sections.)  It was called Novadock and was (old) Panamax size. It was built and owned by the Province of Nova Scotia as a means of keeping the then Halifax Shipyards (plural) competitive in ship repair. 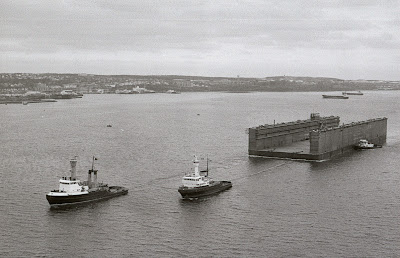 November 15, 1982 the tugs Irving Miami and Irving Cedar assisted by Irving Teak towing in the larger section of the Novadock from Sorel, QC, where it ws built. (A smaller section was built in Pictou and joined in Halifax.)

Since the advent of the National Shipbuilding Procurement Strategy (NSPS) Irving Shipbuilding has become a strictly naval shipbuilding and repair centre and no longer carries out commercial ship repair. It still has the graving dock, which can accommodate a Halifax class frigate for refits, but it is understood that they would like to increase their drydocking capacity and possibly have enclosed space.

The NSPS, now the National Shipbuilding Strategy (NSS), has been a bit of a double edged sword as it has opened up possibilities for several other shipyards for both repair and newbuilding work. But with Halifax booked to capacity for newbuilds and naval refits there is little room for repairs.

Davie Shipyard in Lévis, QC with two huge graving docks, has secured frigate repair work, icebreaker construction / conversions and has built and operates a supply ship for the RCN . (That ship, the Asterix is currently in drydock at the shipyard.) They also recently handed over CCGS Vincent Massey the last of three supply ship rebuilds as interim Coast Guard icebreakers, and completed a major refit on HMCS Toronto.

Heddle Marine from Hamilton, ON has rejuvenated the large graving dock in Thunder Bay and the former Port Weller Dry Dock in St.Catharines, ON and was recently awarded a big refit contract on CCGS Terry Fox.

Groupe Océan, operators of a small shipyard at Ile-aux-Coudres, QC, and a repair/ drydock/ fabrication facility in Quebec City, has completed the first of four tugs for the RCN. The Haro will be transported to Esquimalt, BC by heavy lift ship. The company has also acquired the Verreault shipyard in Méchins, QC, with its own large graving dock and extensive repair / fabrication (and future shipbuilding) capability. The Méchins yard is the closest large shipyard to the Atlantic coast, but is severely hampered in winter.

The only other large drydocking capability in eastern Canada is Newdock in St.John's, NL with a graving dock and synchrolift. (There are several capable smaller shipyards such as Pictou and Shelburne, NS that also do RCN and CCG refit work and commercial ship repair.)

The Royal Canadian Navy's own ship repair unit in Halifax, has a synchrolift that will need to be upgraded to accommodate larger ships. The facility now maintains submarines, and frigates.

Without a large drydock, Halifax Shipyard is shut out of the commercial ship repair business, but that is to be expected as it now concentrates on naval work. It is inching ahead on the frigate replacement project which will keep the yard occupied for the next 10 to 15 years. 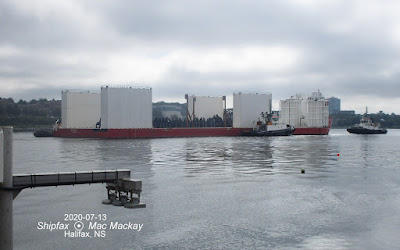 BoaBarge 37 transferring components across the harbour from Woodside to Halifax Shipyard.