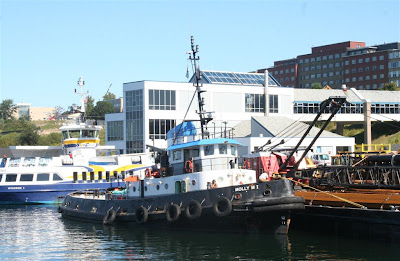 The tug Molly M 1 with the barge OC181 made the long trip from Hamilton, Ontario to Halifax to load construction equipment. The 900 tons of gear including a crane, trucks and other stuff is bound for Labrador and, belongs to Waterworks Construction.
The tug, owned by McKeil Marine of Hamilton, was a long time fixture in Halifax. Orginally as Foundation Vigour from 1962 to 1973 and then as Point Vigour. Eastern Canada Towing sold the tug in 2007, when she was renamed Molly M 1.
There is lots of construction activity in Labrador, and Davis Shipping, which bought sister tug Point Vim at the same time, may be involved in this particular operation, as they seem to co-operate with McKeil on various projects.
The tug and barge left Halifax September 2.
Posted by Mac at 9:32 PM