From the shoebox... Douglas Reid 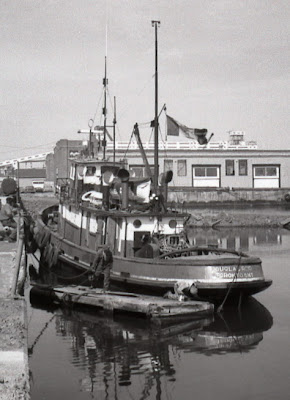 Another oldie.
The tug Douglas Reid pictured on Octber 2, 1969 during construction of the Halterm container pier. The tug was built in 1914 at Cleveland, Ohio, as Racine for Great Lakes Towing. In 1940 A.B.MacLean & Sons of Sault Ste.Marie, Ontario bought her. They in turn sold her to McNamara Construction Ltd of Whitby, Ontario in 1950.
McNamara rebuilt the tug, converting it from steam to diesel power and giving it the name Douglas Reid.
McNamara were contracted for the marine construction portion of the Halterm pier, and in this photo workers are doing some repairs on a day off.
The tug was removed from the register in 1978, by which time she had been broken up.
For more on the A.B.MacLean companies, see the new book "A.B. MacLean & Sons Ltd" by Buck Longhurst and Skip Gillham, published by Glenaden Press, 3750 King St, Vineland, ON, L0R 2C0 (ISBN# 978-1-926744-01-8)
If you were wondering why there is no pier 40 in Halifax (berth numbers skip from 39 to 41) this photo is part of the answer. The tug's bow is pointed at berth 40, which was filled in during the Halterm construction.
Posted by Mac at 7:17 PM