Oldie from the shoebox... Federal Pioneer 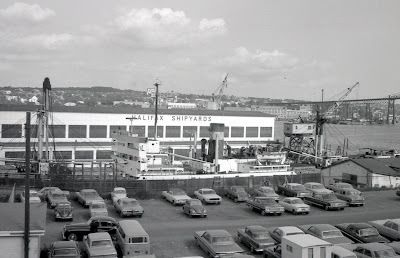 If you've seen Piet Sinke's newsletter he often concludes with an "oldie from the shoebox." Firmly believing that imitation is the sincerest form of flattery, I will do the same from time to time. I have posted lots of old stuff on Shipspotting, but the photos I will post here will not be the standard ship portraits.
I took this October 15, 1969 from Barrington Street, looking down into the Graving Dock at Halifax Shipyard. It shows FEDERAL PIONEER (ex Brazilian Prince -58, Outremont Park -56) 7158/44 United Shipbuilding, Montreal.
She spent her last years lying in Halifax until needed for northern supply work in the summers.
In 1970 she was sold for scrap to China. She sailed there on her own via Honolulu (December 19, 1970) and arrived in Hsinkiang January 21, 1971 where she was broken up.
The photo also shows a swanky looking vehicle pulled up at the front gate - perhaps a Jaguar.
Posted by Mac at 10:33 PM