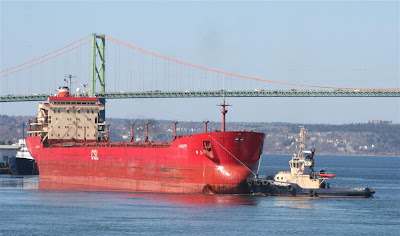 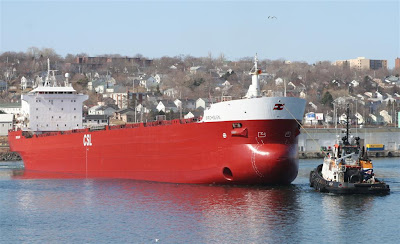 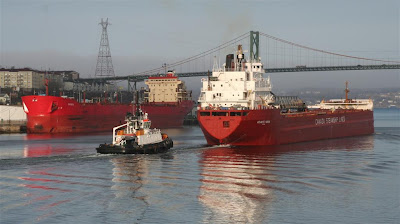 Saturday March 20 was CSL day in Halifax, as no less than three CSL ships were on the move. First off was Atlantic Huron. This self-unloading bulk carrier came out of her winter refit and sailed north to National Gypsum to load. The tug Atlantic Spruce tagged along to shove her alongside the pier. Atlantic Huron was built in 1984 as a "straight deck" bulker named Prairie Harvest. She was converted to a self-unloader in 1989 took on her present name at that time. From 1994 to 1997 she was renamed Melvin H. Baker II while on charter to National Gypsum. In 2003 her hull was restructured to take advantage of new St.Lawrence Seaway regulations, thus widening the ship 3 feet over most of her length. This increased her payload capacity substantially and prolonged her life.
She usually runs on the Great Lakes and St.Lawrence River in summer with the odd visit to Halifax with grain.
On her way through the Narrows she passed two of her fleet mates.
Birchglen was preparing to come out of the Novadock floating drydock, which she soon did with the assistance of Atlantic Oak on the bow and Atlantic Larch on the stern. She has also had a refit during which her hull paint was changed from black to red. Birchglen was built as Canada Marquis in 1983 by Govan Shipyard in Scotland. She carried the names Federal Richelieu in 1991, Federal Mackenzie 1991-2001 and Mackenzie from 2001-2002. At that time CSL acquired the ship and has brought it back in operation under Canadian flag and gave it the named Birchglen.
As soon as the drydock was ready the third CSLer, Oakglen moved in, assisted by Svitzer Bedford and Atlantic Spruce. Oakglen is a more recent acquisition by CSL, one of three ships built to maximum Seaway size, but for ocean trading too. She was built in 1980 in Belgium as Federal Danube. In 1995 she became Lake Ontario and was renamed Oakglen in 2009 upon acquisition by CSL. She is still flying the flag of the Marshal Islands, but is expected to become Canadian to take up work in domestic waters. Despite her age (30 is old for a ship) she can be expected to put in many more years working mostly on the St.Lawrence River.
Posted by Mac at 8:18 PM