Back to Normal (for now)

Over night Tuesday - Wednesday  September 20-21, pilotage operations in Halifax were suspended due to the sea state at the harbour entrance. Swells were such that it was too dangerous to embark and disemberak pilots. Conditions improved in the early morning and as of 0500 hrs today, September 21, arrivals and departures resumed.

This is only a temporary weather window as Hurricane Fiona makes its way in our direction. It is predicted to be a post-tropical storm by the time it passes Halifax Friday September 23 to Saturday September 24, with winds in excess of 120 kph and heavy rain forecast.

There was a great rush of ships to arrive this morning and some delayed departures as ships scrambled to get in and or get out before the second event.

Most of the arrivals made their way in before daylight. One of these was MSC Manya at Pier 42 on the Canex 1 service from Italy, Spain and Portugal. It will decant some containers here before moving on to its terminal port of Montreal. 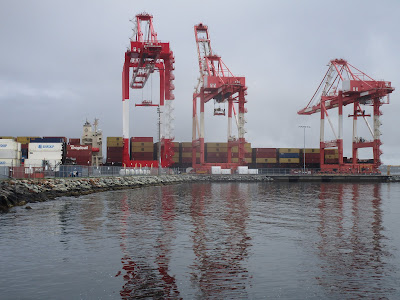 Vacating the adjacent berth at Pier 41 was the Ultra sized CMA CGM T. Jefferson on the Ocean Alliance joint service with CMA CGM, Evergreen, and COSCO. 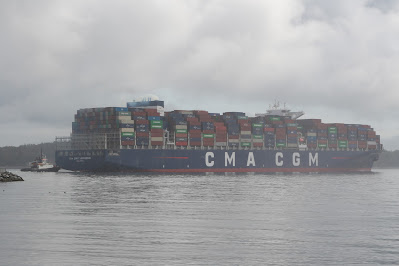 CMA CGM T. Jefferson moves off the pier and into a rain shower, with the tug Atlantic Oak assisting.

Both the above ships had been anchored off Halifax for several days. I intially thought this might have been due to the optional holiday on Monday for the funeral of Queen Elizabeth II, but that was not a holiday for longshore workers. Terminals were coping with cargo backlogs and were working full out to handle ships.

Ocean Alliance partner COSCO (China Ocean Shipping Company) will be making a single "unscheduled" visit to Halifax on September 28. Their 14,568 TEU size ship COSCO Shipping Himalayas will be calling at PSA Atlantic Gateway to more or lesss "test the waters" on one of their regular services to the US.With the current congestion and other isssues at US east coast ports, calling in Halifax allows lines to deliver boxes, particularly to mid-west US destinations, more quickly. The "shorter sea route / longer land route" has always been a selling point for Halifax, as trains can move those boxes faster than ships do.

Another arrival this morning was Oceanex Sanderling from St.John's. The newly refurbished ship looked neat and tidy despite the misty / rainy conditions. 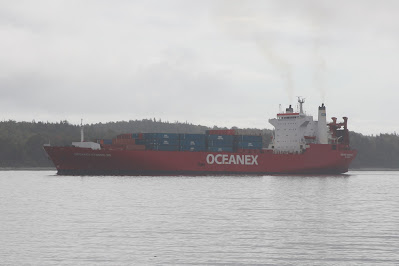 Its normal Friday departure may be delayed by weather.