With the return of sunny and mild weather today, there was little to remind anyone that there had been a post tropical storm less than a week ago. Nevertheless harbour traffic could not be considered exactly normal.

ZIM's feeder service, the Canada Feeder Express saw the arrival of AS Felicia, a ship that has not been seen here on that route for several years. 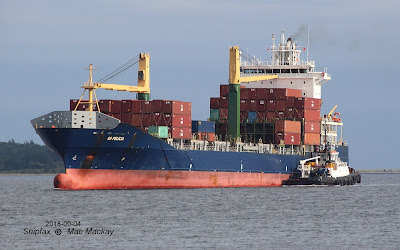 The regular feeder ship Contship Leo on leaving here September 14 sailed to its usual destination of  Kingston, Jamaica, but then went on to Altamira, Mexico, and has been reported in Veracruz, Mexico since September 27. This seems to be a weather related diversion, since the ship would normally have returned from Kingston to New York. Also AS Felicia normally runs to San Juan, Puerto Rico, which was badly hit by Fiona when it was at hurricane strength, so has likely been redeployed to keep it running productively.

Another unusual caller is the Irving Oil (long term charter) tanker Nor'easter. Sailing under the Marshall Islands flag, its normal trade is between Saint John, NB and US ports. I assume it has been granted an emergency coasting license to replenish local fuel supplies, as some facilities ran short following Fiona. Sydney and Charlottetown may also be on its itinerary as those cities have also experienced shortages. Correction: Due to a maintenance shutdown of the Irving Oil refinery in Saint John, both Nor'Easter and Great Eastern were dispatched to Amsterdam for cargoes from Irving Oil's European depot. Nor'Easter sailed from Amsterdam September 17 and delivered some of the cargo to its Saint John terminal September 27-28, before arriving in Halifax. Great Eastern is due in Amsterdam October 6. 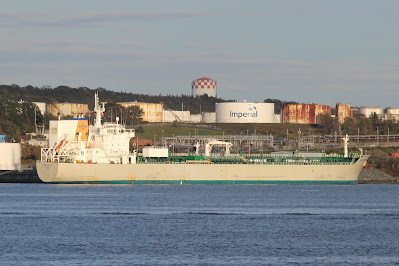 Similar to the other Irving Oil charters (which were built in 2005), it was built in 2007 by Hyundai Mipo, Ulsan as Iver Progress. The 23,589 gt, 37,412 dwt ship was brought into the Irving fleet by Vroon after the previous Nor'easter was moved to Canadian flag and renamed East Coast in 2014, joining the other Canadian flag tanker Acadian.

The (current) Nor'easter works with New England and Great Eastern under Marshall Island flag running to US ports. It did operate for Irving Oil under its orginal name until 2016.

Cruise ships have returned to normal schedules too, but today's arrival of Enchanted Princess was slightly unusual. The ship was due here originally on Thursday, September 22, the eve of Fiona's arrival on September 23-24. Arriving off Halifax from Saint John, NB, it did not actually enter port, but returned to sea and made for New York. I imagine it took a wide loop out ot sea to avoid Fiona's track, but must have found some rough weather en route.

On arrival in New York September 24, it sailed again for Boston (September 26) and called on Saint John yesterday. 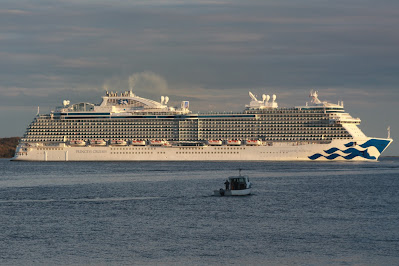 Built by Fincantieri, Monfalcone in 2020, the 145,281 gt ship had to postpone its maiden voyage from June 2020 to November 2021 due to the world wide shut down of cruises during the height of COVID. It has a capacity of 3,660 passengers and a staff of 1,346. It sailed this evening again for New York and will likely have a more pleasant voyage than its last one.