Cities around the world abound in famous streets, but some cities use waterways as streets, among them Amsterdam where their picturesque canals are justifiably well known. Some streets however are more famous for the places they serve. Ships named for streets are relatively rare, so seeing two such ships (by a bit of a stretch) in one day is unusual.

The well known Dutch company Spliethoff, headquartered on a canal in Amsterdam, names its ships for those local waterways "grachten" (plural of the Dutch word "gracht" meaning canal). There are 160 canals in Amsterdam alone, so with 50 ships in its fleet, Spliethoff has lots of choice for new names. Other Dutch cities also have canals, so the options are nearly limitless. (The Spliethoff Group also includes BigLift Shipping and some European RoRo and short sea operators.)

Spliethoff ships call in Halifax irregularly with project cargoes or containerized and special commodities, such as yachts and wind power components. Many of the ships are specially fitted to carry paper products, and are well known in Quebec and Newfoundland. They also carry containers to the Great Lakes seasonally.

Today (September 19) saw arrival of the Deltagracht which tied up at PSA Fairview Cove. It was built in 2009 by the Jinling Shipyard in Nanjing, China. A multi-purpose / heavy lift general cargo vessel of 13,558 gt, 18,143 dwt it carries three 120 tonne capacity cranes. Unlike many of its fleet mates it does not have side doors, nor pallet loading capability. 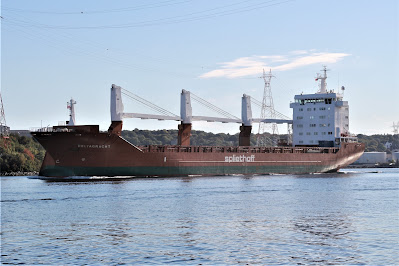 However the ship does have what can be described as a cutwater "fillet" above the bulbous bow. This is a feature unique to Spliethoff ships. 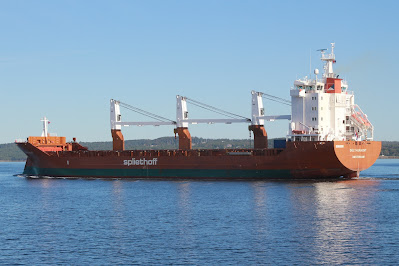 The ship that was actually named after a proper dryland street arrived (by coincidence from Amsterdam) this afternoon for Irving Oil. 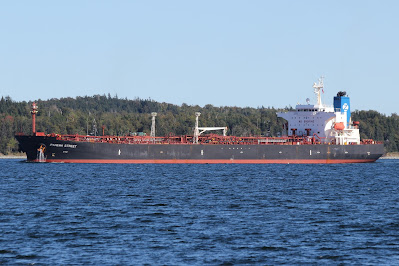 Ipanema Street is a 26,916 gt, 47,378 dwt MidRange tanker. Built by Onomichi Zosen in 2010 it was originally named Sanko Libra, it was renamed Pacific Citrine in 2011 and Ipanema Street in 2013. It now wears the funnel mark of its managers, Zodiac Maritime. The giant (180 ships of all types) London based company, has no unique naming theme.

Ipanema Street parallels the best known of Rio De Janiero's beaches. It is closed to vehicle traffic on Sunday's due to the masses of people attracted to the area. The beach was brought to world attention in the mid 1960s by Astrud Gilberto singing "The Girl from Ipanema".