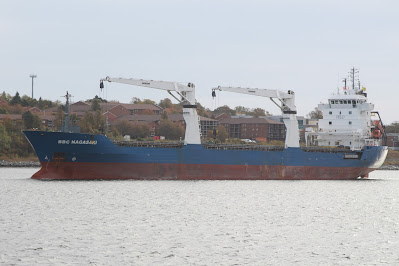 The 6351 gt, 9739 dwt ship's shell was built in 2011 by Jiangsu Changbo Shipyard Co in Jingjiang, China, and was fitted out and completed by the Volharding Shipyard in Foxhol, Netherlands. Launched as Sinus Aestuum it was chartered out on delivery as Thorco Commander and in 2016 shifted to BBC Chartering under the current name. Unlike many BBC ships its cranes are fairly light duty with a rated SWL of 60 tonnes each. They can work in tandem for a 120 tonne lift. The ship has the usual removable pontoon type tween decks, box shaped holds and ventilation of  the multi-purpose type ship.

With a last port listed as Belfast, it was no surprise when the ship began to unload aircraft components for Bombardier. The former Short Brothers factory in Belfast builds tails and fuselages which are shipped to Halifax and trucked to the final assembly plant in Quebec.

The components, mounted on special frames and Mafi trailers, are usually sent from Belfast to Liverpool, UK from where the Atlantic Container Line carries them to Halifax as RoRo cargo. However British dockworkers are conducting rolling work stoppages in Liverpool and Felixstowe, so Bombardier has presumably chartered the ship to maintain deliveries.

Several tail sections and cylindrical fuselages were off loaded and will likely be on the road to their destinations in the next few days. 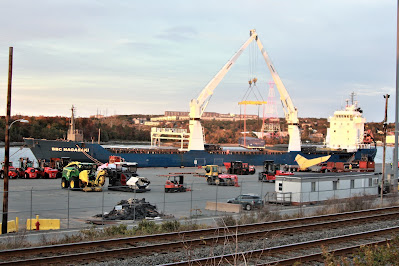 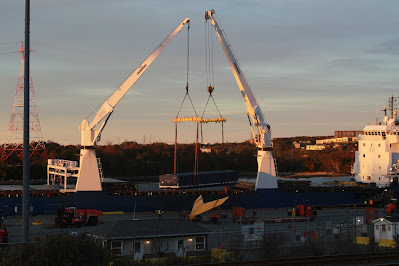