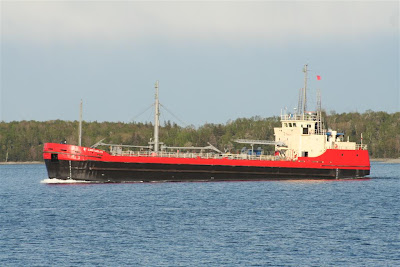 Halifax's bunkering tanker NT DARTMOUTH returned to port this evening, sporting her new red and black paint scheme. It certainly is a distinctive change from her familiar green. I was still getting used to the green scheme!
Here is the story:
The tanker was built in 1970 at Collingwood, Ontario as the IMPERIAL DARTMOUTH, for Imperial Oil. At that time Imperial had a large tanker fleet, and this ship was built to replace a series of bunkering barges used in Halifax. Those barges required tugs to move around the harbour and were costly to operate. IMPERIAL DARTMOUTH was intended to work only inside Halifax Harbour, but she had to make the trip from Collingwood- and that was quite an adventure. She left Collingwood on December 2, 1970 and immediately encountered a fierce winter storm in Georgian Bay, during which she lost her anchor and her radio antenna. Repairs were carried out in Sarnia and she went on to Lauzon, Quebec where more repairs were carried out and some finishing work.
She was then towed to Halifax by the tug FOUNDATION VALOUR, finally arriving December 23 through more storms and with an icebreaker escort through the Gulf of St.Lawrence.
Since that time she has rarely left the confines of Halifax harbour. Twice she did go out to sea to refuel an attempted transatlantic speed record crossing. I know that in 1994 she was towed to Liverpool for drydocking.
Another adventure was during Hurrican Juan in September 2003 when she was moved to the Fairview Cove container terminal to shelter from the wind. However she was showered with debris, including some containers or parts of containers. A large gas station style illuminated "Esso" sign that she carried on her deck was swept overboard, never to be seen again.
In 2006, after Imperial Oil sold all its other tankers to Algoma, they sold IMPERIAL DARTMOUTH to Northern Transportation Ltd of Hay River, and she became NT DARTMOUTH. Her blue hull became green at that time, replacing the traditional Imperial Oil blue.
Northern Transportation Ltd was founded in 1934 and is now owned by the Unuvialuit of the western Arctic and the Inuit of Nunavuk. They specialize in Mackenzie River navigation but also operate tugs and supply vessels on this coast, mostly out of St.John's.
NT DARMOUTH has been away for the better part of a week, so I assume she went to Lunenburg for this refit and repainting, making the trip on her own, possibly the first time she has made such a trip (other than the two refueling at sea operations for the speed records.)
Posted by Mac at 8:50 PM